Nick Castellanos capped a five-run fifth inning comeback with a three-run home run, his fifth, to lead the Cincinnati Reds (29-27) to a 5-3 victory over the Pittsburgh Pirates (24-32) in the rubber game of a three-game series at Great American Ball Park.

Pittsburgh jumped on sim Reds starter and winner Trevor Bauer for three runs before most of the sim fans had settled into their sim seats. After recording the first two outs, Bauer surrendered a double to Brian Reynolds, a single to Josh Bell and a three-run homer to Gregory Polanco to give the visitors the early 3-0 lead.

Bauer and the sim Reds relief staff held Pittsburgh to no runs and five hits for the remainder of the game. Pirates starting pitcher Mitch Keller held the Reds in check until the wheels fell off for him in the fifth. Bauer led off that inning with a single and advanced to second on an error by Bell. After striking out Mark Payton and retiring Jesse Winker on a fly out, Keller would not retire another batter. The big two-out rally started with Phillip Ervin singling, advancing Bauer to third. Eugenio Suarez then singled, scoring Bauer, and steady Freddy Galvis doubled to score Ervin and send Suarez to third.

Castellanos, who entered the game as a pinch-runner for Joey Votto after he was hit by a Keller pitch in the second inning, then stepped in and launched his fifth homer over the GABP fence to give Cincinnati a lead it would not relinquish. Votto’s injury was not serious, and he will be available for Friday’s game.

Bauer, followed by Robert Stephenson, Matt Bowman and Pedro Strop, held the Pirates in check the rest of the way. Strop surrendered a two-out double to Reynolds in the top of the ninth, bringing Bell to the plate representing the tying run. Strop struck Bell out to earn his first save as a sim Red.

After the sim Reds players celebrated the win on the field, they shunned Redleg Nation commenter/manager Melvin, who recorded his first win in that role. But after a few seconds, it became clear that it was an organized joke or hazing, and team prankster Derek Dietrich rushed up behind him and poured the contents of a Gatorade container over his head.

With the win, the sim Reds have won nine of their past 12 and 12 of their last 16 games. They completed a seven-game homestand with a 4-3 record. 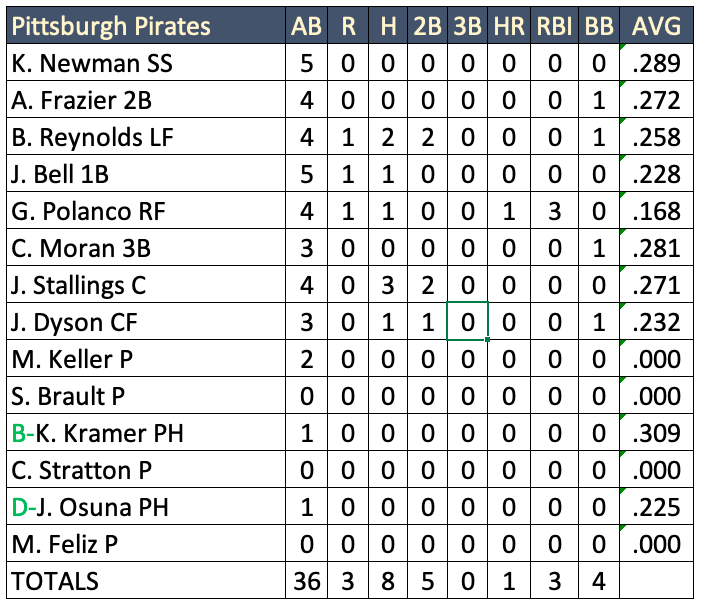 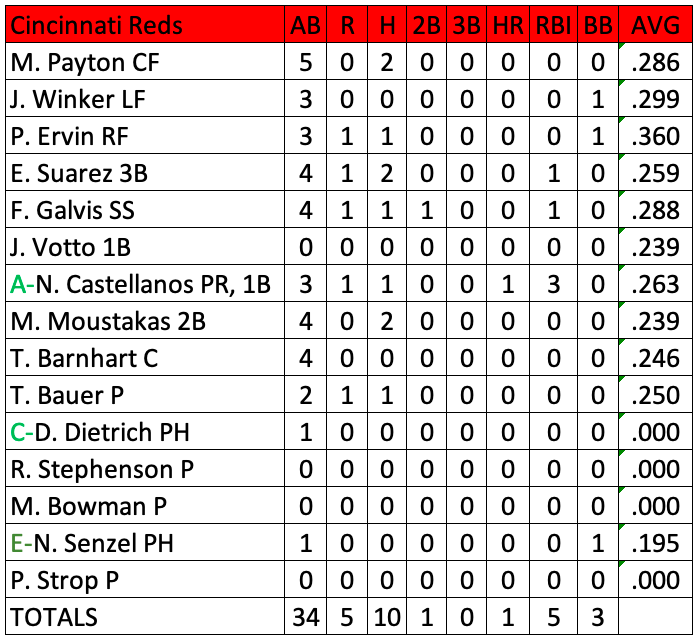 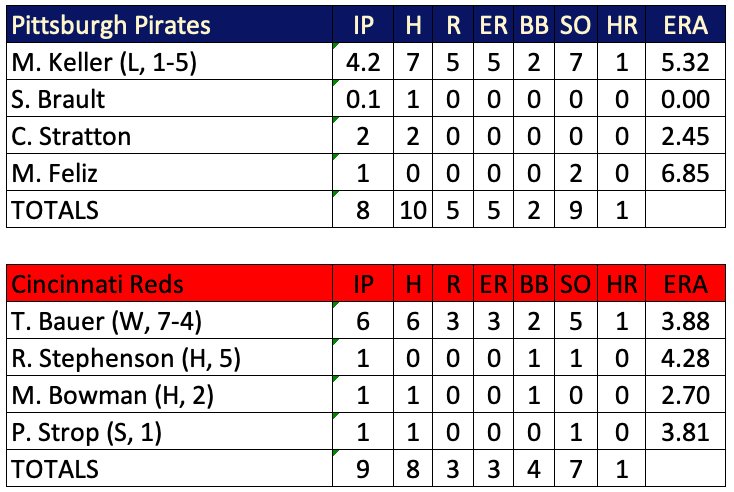 Standings following the May 28 games:

The NL Central-leading Cardinals were off today, meaning that the Reds pulled to within two and a half games with the win. Milwaukee and Chicago both won their games to maintain their second-place tie and one-half game edge over the Reds.

The 2020 schedule as currently constituted has the Reds hitting the road Friday for the first of an important four-game series against the Cubs at Wrigley Field. Anthony DeSclafani will pitch for the sim Reds, while right-hander Kyle Hendricks pitches for the Cubs.

The Reds will release some minor league players

Jon Heyman is reporting that the Reds are among teams that are going to be releasing minor leaguers today. No, not all of them. The exact number is not yet known, but other teams have already done so and the numbers are between 13-37 players. It may depend on whether the team had already made some cuts in March or not.

Mets, Reds and other teams are releasing minor leaguers today. “Literally a war zone out there,” one agent called it. @ByRobertMurray 1st mentioned mets releases

Speaking of minor league things – Gary Nolan was tabbed for his 1966 season with the Reds farm system season of the decade of the 1960’s over at RedsMinorLeagues.com. His birthday was yesterday, so this is a terrible gift to give him – especially since it’s a day late – but here ya go. Happy Birthday, Gary.

Texas to allow fans at pro sporting events at 25% capacity

The Associated Press is reporting that in the state of Texas that pro sports that take place outdoors will be allowed to have up to 25% of the seating capacity beginning in June. Organizations will need to apply to the health officials and must follow all guidelines set forth by the state.

Winning commenter/manager Melvin has priority for the Friday lineup due to his victory today. Have fun with this! If you have any questions, please post them in the comment string below. Here are the “managerial records” of our Redleg Nation participants to date: