Six home runs flew out of Great American Ball Park off the bats of Cincinnati Reds (28-26) hitters, and the home team needed every bit of that muscle to score an 11-9 victory over the Pittsburgh Pirates (23-31) in the opening game of a three-game series between National League Central Division rivals.

Eugenio Suarez was the primary power source for the sim Reds, with two homers (bringing his team-leading total to 16), a double and five runs batted in. Other Reds homers were struck by Phillip Ervin (his fifth), Freddy Galvis (third), Curt Casali (first) and Jesse Winker (fourth).

Cincinnati scored in each of the first six innings, as they pummeled Pirates left-handed starter Derek Holland for five of their six home runs. Winning Redleg Nation commenter/manager Redsfan4life loaded his lineup with right-handed bats, which paid off as all five longballs off Holland were struck by right-handed batters.

Pittsburgh took a 4-3 lead in the top of the third against winning pitcher Luis Castillo, but his sim Reds teammates took the lead for good in the bottom of the inning with a three-spot. Suarez hit a two-run shot in that inning, and Galvis followed with a solo shot to give Cincinnati a 6-4 lead. The Reds got three more in the fourth on a three-run shot by Suarez, which marked the end of the day for Holland.

Castillo hung in long enough to get credit for the win, but his pitching line of eight earned runs allowed in five and two-thirds innings was certainly nothing to be proud of. He allowed four runs in the top of the sixth to bring Pittsburgh back within 10-8, and Robert Stephenson allowed a run in the seventh to make it a one-run game at 10-9. Winker added a crucial pinch-hit solo shot off Robert Rodriguez in the bottom of the eighth to score an important insurance run, and make the score 11-9, which was the final.

Division-leading St. Louis lost, as well as the Cubs, meaning that the sim Reds climbed over Chicago and into sole possession of second place, only two games back of the Cardinals. 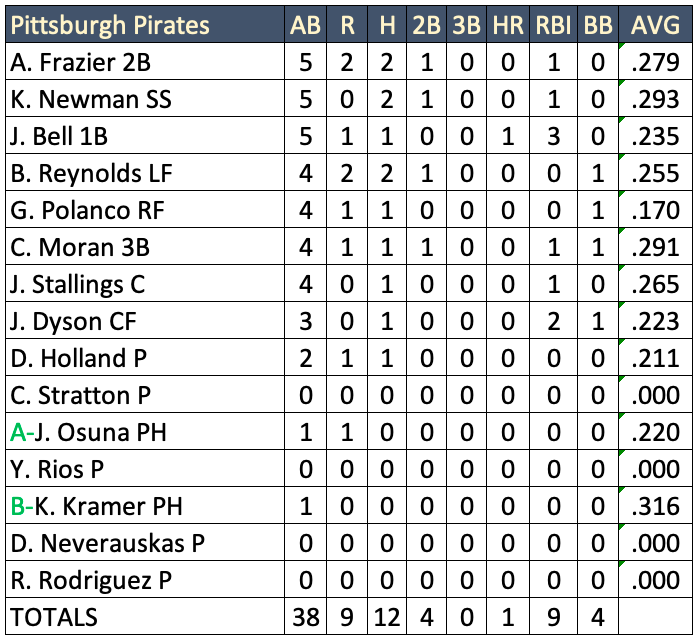 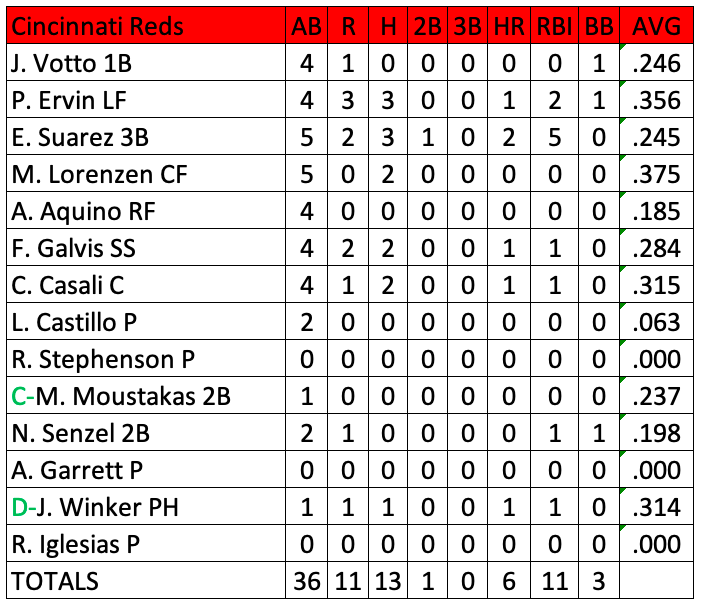 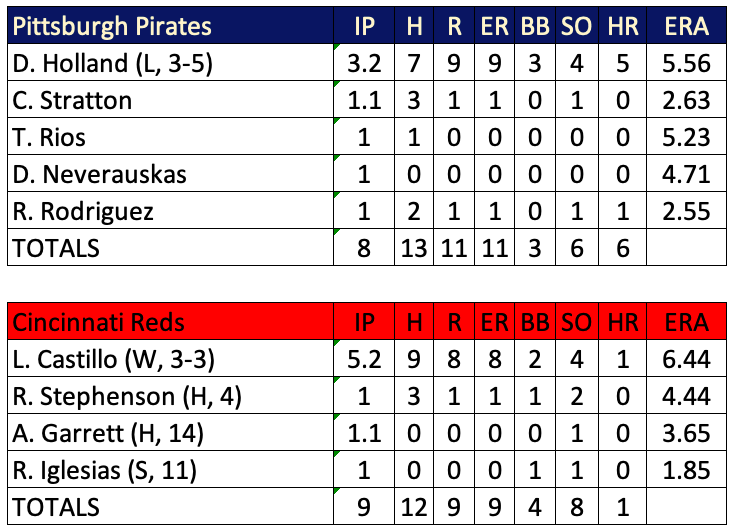 Standings following the May 26 games:

The 2020 schedule as currently constituted has the Reds playing game two of the three-game series against the Pittsburgh Pirates Wednesday at Great American Ball Park. Sonny Gray will pitch for the sim Reds, while righthander Joe Musgrove pitches for the Pirates.

Outfielder Nick Castellanos is due to be activated from the 10-day injured list for Wednesday’s game, so one player will have to be sent to the minors to make room for him. Redleg Nation readers are asked to cast their votes in the comments below for the player who will be sent down.

We’re going to have some more on this in the morning, as we’d like to digest more details as they become available. But Bob Nightengale of USA Today is reporting that MLB is planning to approach the players union with a sliding scale for salary reduction where players earning the most would take larger paycuts than those making the least. There’s also talk of sharing more of the postseason shares with the players. You can read the entire article from Nightengale here and formulate your own opinions based on it.

Today marks the 27th anniversary of the best defensive gaff in the history of Major League Baseball in my opinion. That’s when Jose Canseco missed a deep fly ball on the warning track, then had it bounce off of his skull and land over the fence for a home run.

It's been 27 years since Jose Canseco took a baseball off the dome… and it still hasn't gotten old ?

If you’re looking for some Reds multimedia this week, you are going to have some choices. On Fox Sports Ohio you can watch past games at night from Thursday through Sunday.

If you want to see a young Joseph Daniel Votto, his first career start from back in 2007 will be available to stream on both Facebook and Youtube on Sunday, May 31st at 2pm ET.

Here’s where you can catch the Reds this week! ???

Redsfan4life will have priority for Wednesday’s lineup since he was the winning commenter/manager today. Have fun with this! If you have any questions, please post them in the comment string below. Here are the “managerial records” of our Redleg Nation participants to date: