The sim Reds defeat ended a six-game winning streak, led by Redleg Nation commenter/manager Jon Davis. Adding injury to insult, Cincinnati’s MVP candidate Shogo Akiyama suffered another injury, his second this month, and will be out of action for eight games. He was injured while running out a ground ball in the seventh inning.

San Diego reached sim Reds starter Trevor Bauer, who was clearly not on his game, for five runs over the first three innings. Bauer walked five and allowed six hits. The Reds scored two in the bottom of the third on Akiyama’s seventh homer of the season, and then added two more in the fourth on a bases-loaded single by Freddy Galvis. But with runners on first and second and one out, Padres starter and winner Dinelson Lamet bowed his back, retiring Akiyama on a lineout and Mark Payton on a groundout to prevent any further runs from scoring.

As it turned out, there would be no further scoring over the final five innings, as both bullpens pitched shutout baseball. Over the final five innings, the Reds had no more than one runner reach base in any inning. There was a moment of hope in the bottom of the ninth inning when Galvis reached on an error by third baseman Manny Machado. But Padres reliever Emilio Pagan induced Curt Casali to hit into a game-ending double play.

Despite the loss, the sim Reds have won six of their last seven and nine of their past 11 games.

Akiyama will be placed on the 10-day injured list, and Redleg Nation readers will be asked to vote below on which player they believe should be brought up to replace him:

First-place St. Louis also lost, so the Reds’ deficit remains at two games. The Cubs beat the Brewers, resulting in both of those teams being also two games behind the Cardinals. Technically, the sim Reds have a one percentage point lead over the Cubs and Brew Crew for second place. 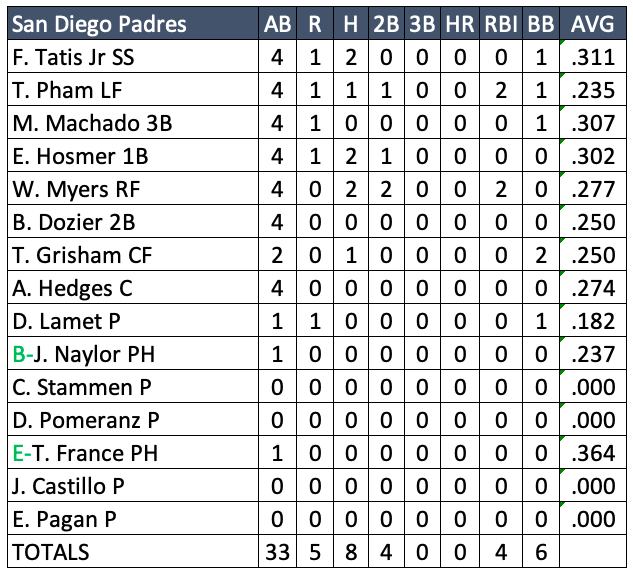 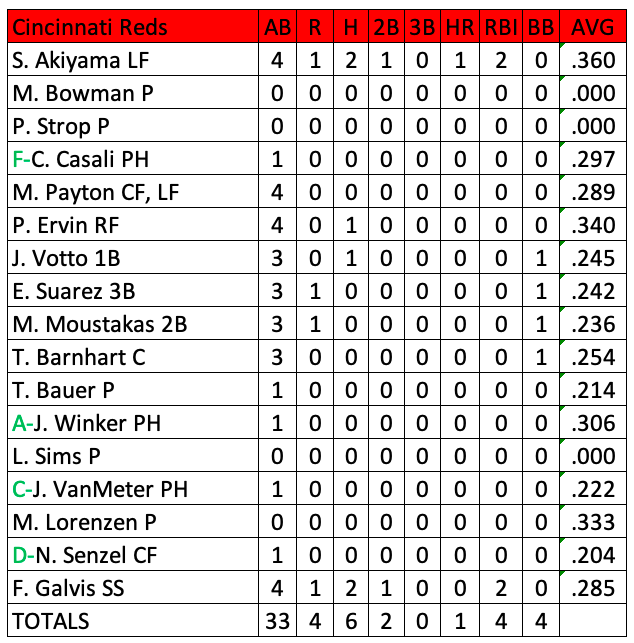 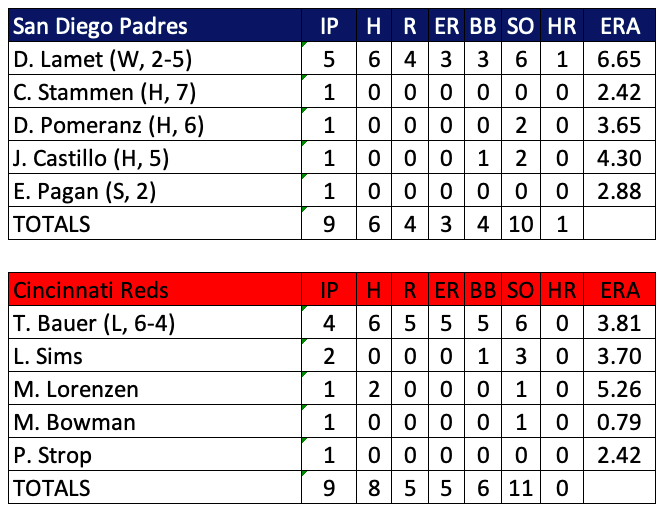 Standings following the May 23 games:

The 2020 schedule as currently constituted has the Reds playing game three of the four-game series against the Padres Sunday at Great American Ball Park. Anthony DeSclafani will pitch for the sim Reds, while lefthander Joey Lucchesi pitches for the Padres.

MLB expected to propose a new economic plan on Tuesday

Evan Drellich of The Athletic reported yesterday that MLB is expected to propose a new economics plan to the MLBPA on Tuesday. There’s long been the rumor that MLB wants a 50-50 split with the players on the 2020 season among baseball revenue, but that has never actually been offered to the players. Maybe that’s what is coming, or maybe they’ve seen enough to know that it’s not going to be accepted and they’ve got something a little bit different in the pipeline. We’ll find out soon enough.

Eric Longenhagen got around to the Cincinnati Reds this week over at Fangraphs as they’ve been releasing their updated prospect lists. The top five guys in the organization are the same as everywhere else, just in a bit of a different order. But after that is where we start seeing some differences from the other lists we’ve seen. It’s a good read, though, so go check it out.