Had this game been real instead of a simulation, it might have gone down as one of the more memorable regular-season games in recent Cincinnati Reds history.

Joey Votto’s two-out double in the bottom of the 11th scored Mark Payton with the game-winner, sending the sim crowd announced by Strat-O-Matic of 38,079 into a frenzy. They had seen a classic game with more twists, turns and heroics than they could have ever expected when they settled into their seats at the outset of the evening.

San Diego led 3-0 after five innings, thanks primarily to a two-run homer by Fernando Tatis off sim Reds starter Sonny Gray in the top of that inning. It would have been worse, had it not been for centerfielder Payton robbing Francisco Mejia of a homerun in the same inning. In seven innings, Gray struck out 10, walked only two and allowed only four hits.

His sim Reds teammates started the road back in the bottom of the sixth on Mike Moustakas’ solo home run off Padres starter Zach Davies to bring Cincinnati within 3-1.

Reds defense again saved Gray in the top of the seventh, when rightfielder Phillip Ervin scaled the fence to rob Jurickson Profar of a homer, keeping the deficit at only two.

Trailing 3-1 headed to the bottom of the ninth, the sim Reds faced the challenge of Padres closer Kirby Yates, probably the most effective closer in the Strat-O-Matic sim universe to date. Prior to this appearance, he had recorded 14 saves and struck out 27 batters in 17.2 innings, while allowing only four hits, two walks and no earned runs. But the sim Reds knew the winning streak of Redleg Nation commenter/manager Jon “Sparky” Davis was on the line, and they proceeded to do what could only be described as the highly improbable.

With one out, Jesse Winker smacked a pinch-hit single, and steady Freddy Galvis followed with a double, putting the tying runners in scoring position. With Shogo Akiyama at the plate, Yates bounced one in front of Mejia that went for a wild pitch, scoring Winker and moving Galvis to third. Akiyama walked, and Payton proved he could be clutch on offense as well as defense with a single off Yates, scoring Galvis to tie the game at 3-3.

Raisel Iglesias came on to pitch the top of the 10th, and surrendered a home run to Tyler France, to put the Padres back ahead 4-3.

But the Reds’ dramatics were not done. With one out and facing lefthander Drew Pomeranz, Moustakas crushed his second home run of the game and eighth of the season to tie the game at 4-4.

In the top of the 11th, Pedro Strop pitched out of big trouble. He walked Manny Machado with one out, and Eric Hosmer followed with a double. But as he has done more often than not this sim season, Strop struck out Trent Grisham and induced a ground ball from Profar to end the threat and keep the Padres off the board. That was followed in the bottom of the 11th by Votto’s game-winning heroics.

The victory put Cincinnati two games over .500 for the first time in the sim season, was the team’s sixth straight under the leadership of commenter/manager Davis, and the team’s ninth win in the past 10 games. The six-game winning streak, for however long it will last, will go down in Strat-O-Matic sim Reds lore as The Jon “Sparky” Davis Experience.

First-place St. Louis won, along with the Reds and Milwaukee. Technically, the Reds are in second place in the NL Central by one percentage point over third-place Milwaukee. (Both teams are two games behind.) Chicago’s freefall continued, as they lost and fell three games behind and into fourth place. 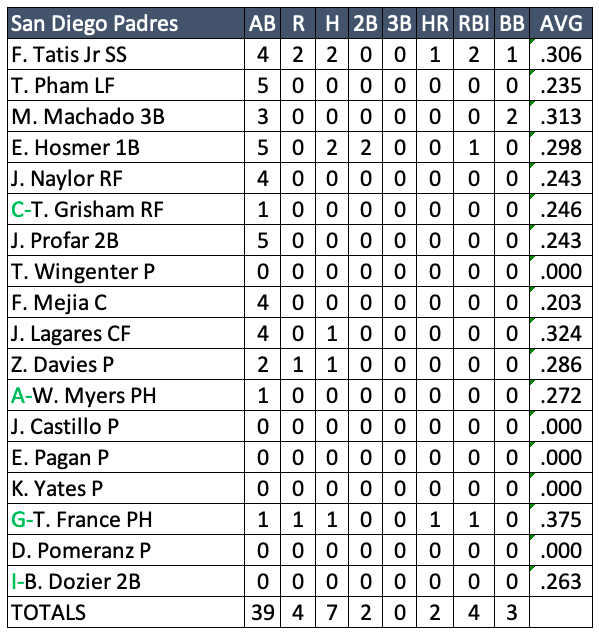 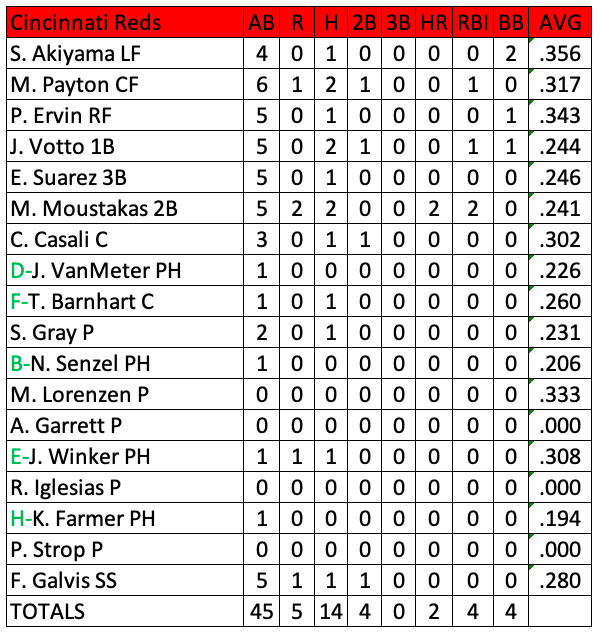 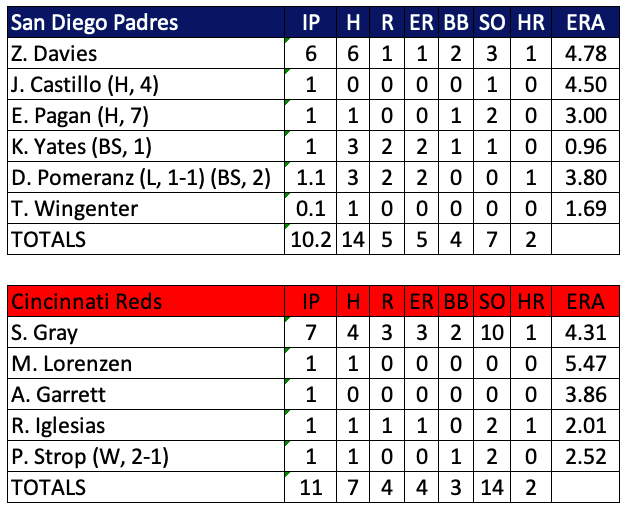 Standings following the May 22 games:

The 2020 schedule as currently constituted has the Reds playing game two of the four-game series against the Padres Saturday at Great American Ball Park. Trevor Bauer will pitch for the sim Reds, while right-hander Dinelson Lamet pitches for the Padres.

We like to have fun around here at Redleg Nation, and with the walk-off win in the game today, we’re going to keep the fun rolling along. There are two sides to every story, as they say. But the sides of the encounter between Tommy Lasorda and The San Diego Chicken are great. Let’s start with Side A:

GABP will be a testing site for an aerosol coronavirus viricide

WLWT (NBC in Cincinnati) is reporting that Great American Ballpark will be a testing site for a viricide that supposedly kills airborne coronavirus particles.

The Cincinnati Reds have agreed to be a testing site for Gignard Pure, which claims to have an effective viricide tested by independent labs across the nation.

Essentially, the ballpark will pump the viricide from its HVAC or other air circulation systems. Initial findings show that this particular viricide inactivates coronavirus particles in the air and as they land on hard surfaces.

What an 82-game season will (and won’t) mean

Jayson Stark takes a look at what a shortened season could be this year – if we get one – in his latest piece over at The Athletic. And hey, the editor even chose to go with a photo of today’s hero – Joey Votto. Part of the reason for that is because Votto was asked about what a season like that would be like, feel like, etc.

Joey Votto is a man of the people.

Joey Votto is the hero we need, but not necessarily the hero that we deserve.

Jon Davis has priority for submitting Saturday’s lineup, and he will try to extend the Reds’ win streak to seven. Have fun with this! If you have any questions, please post them in the comment string below. Here are the “managerial records” of our Redleg Nation participants to date: