Eugenio Suarez broke out of an offensive slump with three hits, including his team-leading 12th home run, and two runs batted in to lead the Cincinnati Reds (21-24) to a 9-5 victory over the Milwaukee Brewers (24-22) at Great American Ball Park.

The NL Central division foes played to a 5-5 standoff through five innings, but the sim Reds broke through in the bottom of the seventh inning. With one out, Freddy Galvis — promoted to the cleanup spot in the batting order by winning commenter/manager Jon Davis — tripled against Milwaukee reliever David Phelps. Milwaukee then countered with lefthander Alex Claudio to face lefthanded batters Tucker Barnhart and Mike Moustakas. Barnhart struck out, but Moustakas made the strategy backfire by clubbing his sixth home run of the season, giving the home team a lead they would not surrender.

The sim Reds tacked on two unearned runs in the eighth against Brewers lefty Brent Suter, who happens to be from Cincinnati. With two outs and two on, Galvis hit an infield single to second baseman Keston Hiura, who then kicked it for his second error of the game, allowing a run to score. Then, Suter booted a grounder hit by Barnhart, allowing another run to score and accounting for the final 9-5 margin.

Phillip Ervin joined Suarez in the three-hit club, raising his batting average to .346.

Pedro Strop was credited with the victory. Just one day after he coughed up a Reds lead late to get tagged with the defeat, he was brought on in a tie game and shut down Milwaukee in the top of the seventh.

It was a very productive day for the Reds in the NL Central standings, as all of the other teams in the division lost. Cincinnati pulled to within four games of the leading Cardinals, and within two and a half of Milwaukee and Chicago, tied for second.

Cincinnati has won four of its last five games, its best stretch of the sim season to date. 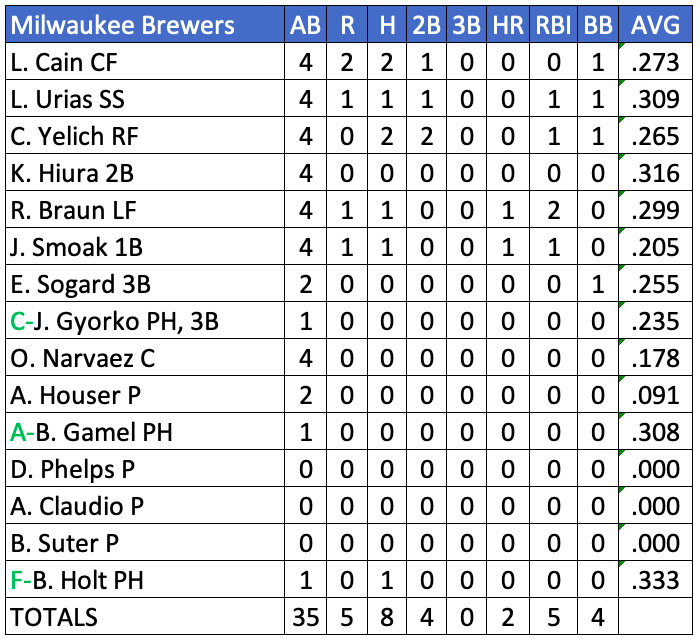 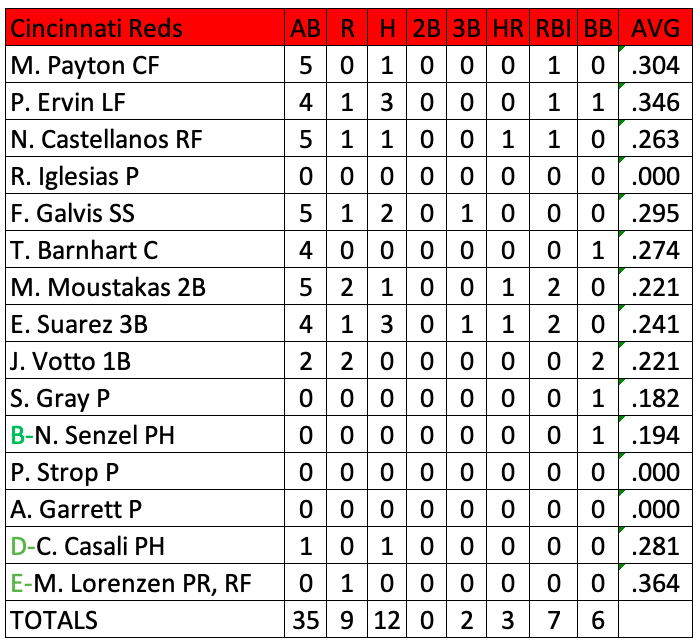 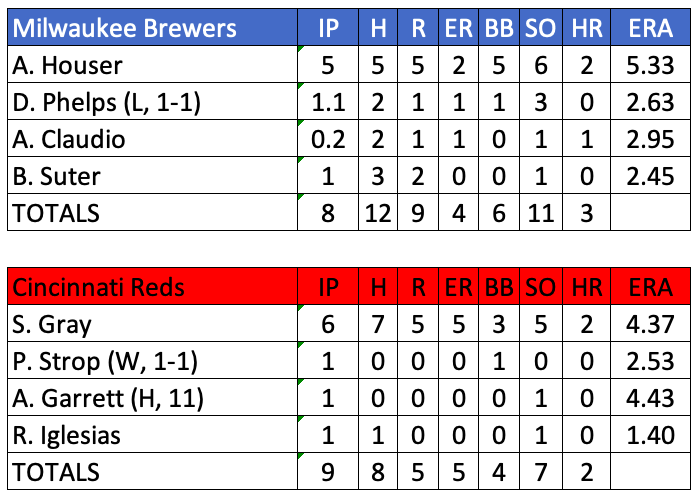 Standings following the May 15 games:

The 2020 schedule as currently constituted has the Reds hosting the Milwaukee Brewers at Great American Ball Park Saturday for the third game of the four-game series. Trevor Bauer will pitch for the sim Reds, while lefthander Brett Anderson pitches for Milwaukee.

MLB’s re-opening plan has a lot of problems

Rob Arthur breaks down Major League Baseball’s re-opening plan over at Baseball Prospectus today. He has a lot of questions still, and notes that there’s going to be risk no matter what – but that the current plan is adding an exponential caliber risk compared to the ones offered before it. You need a free account at Baseball Prospectus to read the entire article. Here’s the concluding paragraph from Arthur’s piece:

The problems here are not as easily solvable as a different revenue split. They are consequences of COVID-19’s basic biology and the highly-infectious, incredibly dangerous infections it produces. Major League Baseball may well be able to steamroll the players’ objections and continue with the plan they’ve laid out. But unless they address these issues, the season will put thousands of people at additional danger. That’s a steep price to pay for baseball.

We all remember the few outliers to the “pitchers can’t hit” statement. But by and large, even the ones we remember as being good, were only good because they were pitchers, but compared to even your average hitter, weren’t. Mike Leake was a “good hitting pitcher”. Leake is a career .192 hitter with a .491 OPS. He hit .333 as a rookie, and two years later he hit .295. He’s hit .200 or less every other year of his 10-year career. Michael Lorenzen is a “good hitting pitcher”. That one is closer to the truth. Sort of. Lorenzen has some pop – he’s slugged .432 in his career. But he’s also hit .235 with a .279 on-base percentage. His 85 OPS+ in his career is very good for a pitcher. It’s also 15% worse than your league average hitter. Micah Owings – that’s actually a good hitting pitcher. He hit .283/.310/.502 in his career.

Why do I bring all of that up? Well, that would be because Ben Clemens wrote an article today at Fangraphs titled “An Encyclopedia of Pitcher-on-Pitcher Crime” where he looks at how cruel some pitchers can be to their counterparts….. by throwing them offspeed stuff. But there’s a real fun ending to the article that I won’t spoil for you. Go check it out.