I regret to inform you that the simulation Reds have had another bad week. I don’t understand how even random chance favors the Pirates over the Reds. There’s some voodoo going on here and I don’t like it.

Thursday, May 7: Reds at Rockies 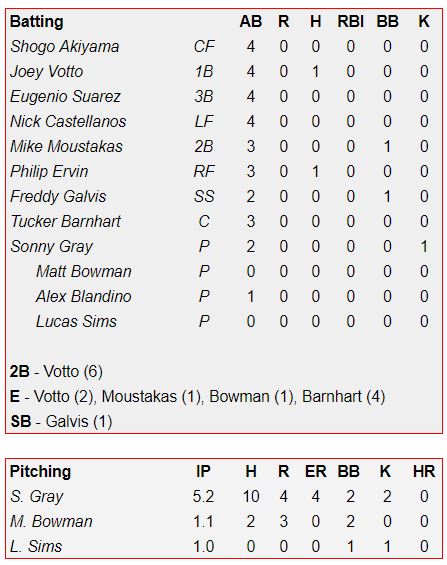 The Game (7-0 loss): Not much to report on this one other than the downhill slide continues. Sonny Gray got tossed around, and errors during Matt Bowman’s inning+ of work added to the damage. The Reds only managed two hits: a double from Joey Votto and a single from Philip Ervin. Truly nothing is going the Redlegs way at the moment.

The Guy: With slim pickings from the Reds today, we turn to the hold adage: “He who hits the double, gets the trouble.” Something like that. Anyway, George Hausmann, much like this box score, didn’t do a whole lot of anything in his three-year career. Or three-ish years. It’s complicated. Hausmann played with the Giants in 1944 and 1945, starting at second base and hitting a respectable .274. Then, when the war ended and the good players came back, Hausmann fled the country. The second baseman signed a deal with the Mexican League, which made MLB commission Happy Chandler sad. Chandler suspended Hausmann should he ever come back to play in the states. Hausmann played two years in Mexico before serving his suspension, which lifted after a year. He ended his career by playing an additional 16 games with the Giants in 1949, hitting a paltry .128 and promptly retiring for good.

Friday, May 8: Reds at Rockies 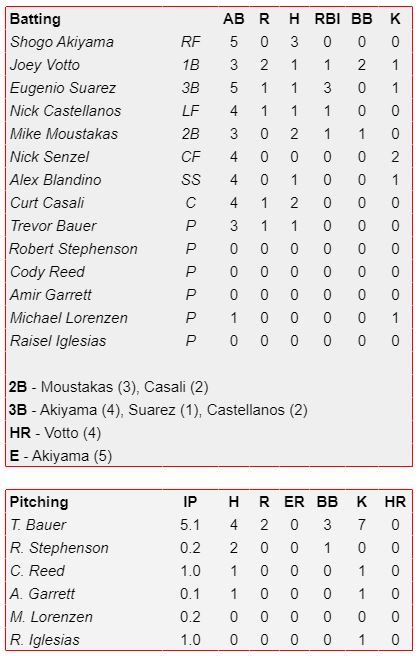 The Game (6-2 win): A win! For once over this miserable two week stretch, the bats and the arms work in tandem to secure a much-needed win. Joey Votto’s first inning solo shot put the Reds on the board, and the team never looked back after that. The Reds combined for 12 hits, including two doubles and three triples and putting up six runs early. With the run support behind him, Trevor Bauer stymies the Rockies for five innings before yielding to a parade of Reds relievers hungry for work. The only blemish on the day was another dud of an outing for Nick Senzel, who went 0-fer with two strikeouts. Dick Williams sent the outfielder back to AAA after the game to get him regular reps and refind his swing, recalling Aristides Aquino.

The Guy: I think everybody knows a good bit about Torii Hunter, him being such a recent player and all, but do you know his answers to the excruciating ice-breaker questions that everyone always asks? Well now, you will:

Also, here’s Torii telling the story of how in his first major league game, he pinch ran for Terry Steinbach, but Steinbach refused to come off the field to prank him. Good stuff, Terry, good stuff.

Saturday, May 9: Reds at Rockies

The Game (3-2 win): Another win! The Reds are, as they say, ~streaking~. Anthony DeSclafani holds the Rockies to just two runs over five-plus innings, and Michael Lorenzen goes full fireman out of the pen to shut the door for another three innings. Nick Castellanos gives the Reds the go-ahead run in the seventh with a solo shot to deep left field. Castellanos now leads the team in home runs, RBIs, walks, and strikeouts. Even in an unrealistic simulated world, you always know what you’re getting with Nick Castellanos.

The Guy: In all of the research I’ve done for this series, the two best nicknames both belong to Richie Zisk. For one, Zisk himself was known as the “Polish Prince,” which I can’t explain why but I love it. And more broadly, during Zisk’s one season with the White Sox, he and the rest of that lineup were known as the “South Side Hit Men.” Iconic. More interestingly though, Zisk and the rest of the Hit Men crew were the unwitting pioneers of the rental player philosophy. Bill Veeck, iconoclast that he was, decided that he the Sox couldn’t financially compete with the big clubs for free agents, so instead he would trade for rental players and build a team that way. Veeck brought in both Zisk and Oscar Gamble under that philosophy, with Zisk hitting 30 home runs and making his first All-Star team. Ultimately, the White Sox finished third in the AL West, with a 90-72 record and 12 games behind the Royals.

Sunday, May 10: Reds at Rockies 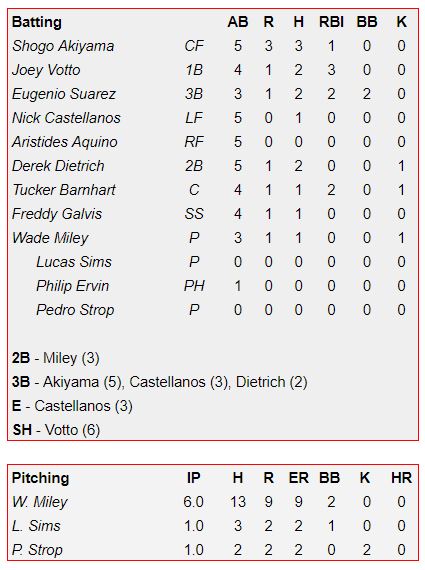 The Game (13-9 loss): Well, not all good things can last. The Reds put up a ton of runs today, with three triples and even Wade Miley adding a double, but the Reds fifth starter just couldn’t buy an out. Miley got peppered for nine runs in six innings, and the bullpen didn’t fare any better, with Lucas Sims and Pedro Strop each giving up two runs in an inning of work. Shogo Akiyama, Joey Votto, Eugenio Suarez, and Derek Dietrich all had multi-hit days while Aristides Aquino went 0-fer in his first start since being recalled.

The Guy: Sam Rice had already lived too much for one lifetime when he broke into the majors in 1915. Rice grew up in Indiana, married young at 18, and decided he would try out for a Class D baseball team across the state when he was 21. While he was pitching for the Galesburg Pavers though, a tornado ripped through his hometown, killing his wife, his children, his mother, and his two youngest sisters. His dad survived the storm but succumbed to injuries not long after. Rice did not end up making the Pavers roster and wandered for a bit before enlisting in the Navy. He fought in a skirmish on the Mexican shore and occupied the city of Vera Cruz for a time before the U.S. Army took over.

While on furlough back in Norfolk, Rice started pitching for a Class C team and did so well that the team’s owner helped coordinate his discharge from the Navy. In his first full season with the Petersburg Goobers, Rice logged 233 innings across 29 outings, striking out 153. The Goobers were badly in debt to the owner of the Washington Nationals though, so to settle the balance, Rice was sold up north. And as they say, the rest was history. Rice — whose real name Edgar Charles Rice by the way, Sam is nickname — went on to play 20 years in the majors and earned enshrinment in the Hall of Fame in 1963. 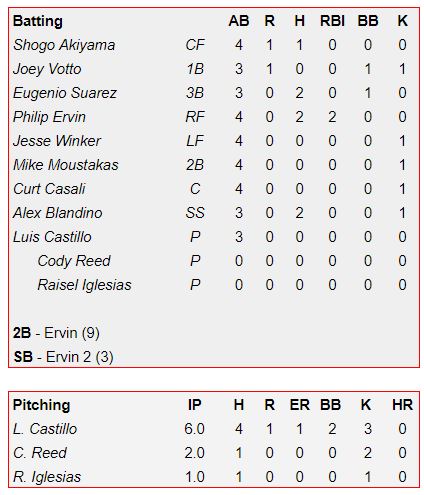 The Game (2-1 win): Luis Castillo pitches a marvelous six innings, and the Reds eke out a win over the lowly Marlins. Eugenio Suarez reaches base three times, setting up Philip Ervin, who drives in both of the Reds runs. Ervin doubles once and steals two bases to take home the game’s MVP honors. Alex Blandino also has a multi-hit game, and Cody Reed finally has a relief appearance where he doesn’t give up a run.

The Guy: For a brief time this winter, I wrote for Baseball Prospectus’ Short Relief. It was fun and I liked it, then it stopped. Short Relief was laid to rest. Anyway, while Googling around to find some fun facts about Kevin Bass, I came across an old Short Relief entry from Patrick Dubuque: The Kevin Bass Game. Really, the game has nothing to do with Kevin Bass and everything to do with this name’s similarity to Kevin Bacon. But it gave me an idea. Can you get from Kevin Bass to any current Red in less than four links? Turns out it’s not that hard at all. Bass played with Arthur Rhodes in Baltimore in 1995, and as we all remember, Arthur Rhodes played with Votto in 2010. Perhaps more surprising: Joey Votto is the only Red from the 2010 roster still on the team. If anyone can find a two-person link from Bass to the current Reds, let me know. 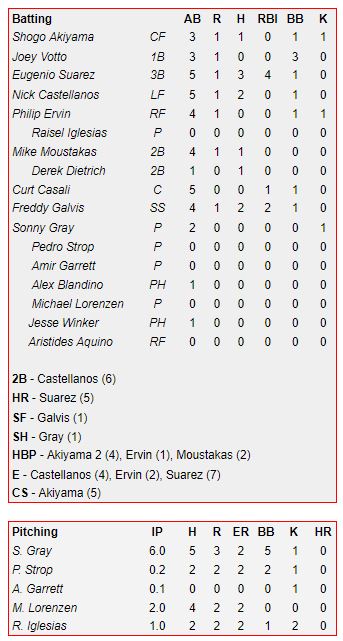 The Game (9-7 loss): A real roller coaster of a game, the Reds, down by four in the bottom of the ninth, rally to send the game to extras in cinematic fashion. To start the inning, Curt Casali grounded out, Freddy Galvis walked, and Jesse Winker flew out to center. At this point, the Reds are down to their last out but with the lineup turning over. Shogo Akiyama wears a pitch and Joey Votto takes his third walk of the game to load the bases. Then, the Eugenio Suarez we all know and love sends one skyhigh to deep left field on a 1-0 count. He rounds the bases calmly, the only sign of emotion a massive, bright pink bubble emerging from his lips. The elation is short-lived though, as closer Raisel Iglesias gives two runs back in the top of the tenth, and the Reds drop another game.

The Guy: I firmly believe, without a shadow of a doubt, that Gary Sheffield deserves to be in the Hall of Fame. Going into his seventh year on the ballot, Sheffield’s chances don’t look good as he only tallied 30.5% of the vote last year. But on the off chance someone with a Hall of Fame vote is reading this, let me sell you. Sheffield:

Put this man in Cooperstown, please.

Wednesday, May 13: Reds vs. Marlins 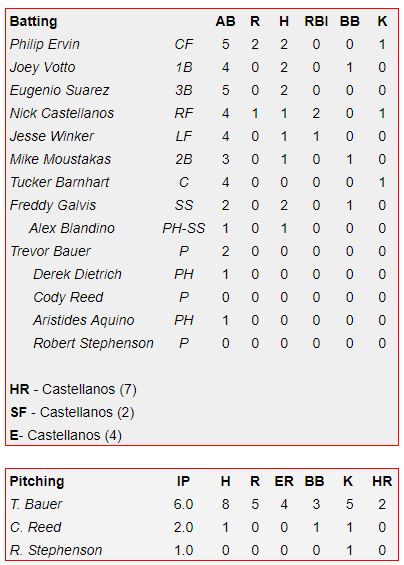 The Game (5-3 loss): At the end to another disappointing week, the Reds drop the series finale, and the series, to the Marlins. The Reds jumped out early in this one, pushing a run over in the bottom of the first, but Bauer allowed three runs in the top of the second. Back-to-back solo shots off of Bauer in the top of the fifth officially sank the Reds, as the offense never mustered much more than singles and a Nick Castellanos homer in the bottom of the fifth. Just like 2019, the offense scores a ton of runs when the pitching gives up a lot, and can’t get runs across when the pitching does its job. Sigh.

The Guy: Dave Schmidt only accumulated 8.8 WAR during his career that last 12 big league seasons, but his demeanor belied that he was made of sterner stuff. Best described by the phrase “quiet intensity,” Schmidt was the guy who went about his business and was never able to leave his play on the field. When he was still a minor leaguer, Schmidt went into one start carrying an 8-0 record. As a gimmick, the Class-A team had comedian Max Patkin role play as the team’s coach. It rattled Schmidt, and that the game was his only loss on the year in Class A. Patkin apologized after the game, and Schmidt replied: “I’m down here trying to get out of the minor leagues, and you’re making a joke of this thing.” As a minor leaguer in AA, Schmidt learned a palmball that set him apart. Although Schmidt only ever became a solid middle reliever, he credits Tom Seaver with getting him that far and making him focus on his pitches’ movement and location to be successful.

The NL Central has gone full topsy-turvy in this simulation, with only the Pirates above .500 and leading the division. All of the teams that were presumed to be contenders have hit long losing stretches while struggling to string wins together. Luckily for the Reds, Castellanos and Suarez are both heating up, Joey Votto is finally getting his walks, and Shogo Akiyama has been a model of consistency.