Pedro Strop surrendered two home runs by Milwaukee Brewers (24-21) batters in the top of the eighth inning, allowing the visiting team to score a 10-9 come-from-behind victory over the Cincinnati Reds (20-24) at Great American Ball Park.

Strop came on in the top of the eighth with the sim Reds holding a 9-7 lead. With one out, Luis Urias singled, and Christian Yelich then homered to tie the game at 9-9. With two out, Avisail Garcia hit a pinch-hit homer to give the Brewers what turned out to be the final margin of victory — their seventh straight win.

Cincinnati unloaded early and often against Milwaukee starter Eric Lauer, knocking him out of the game in the third inning after scoring eight times over the first three frames. Tucker Barnhart continued his hot hitting by knocking in three of the eight early runs with a two-run double and an RBI single.

Unfortunately, Luis Castillo could not stand prosperity. He surrendered seven runs over five innings, and three runs were unearned thanks to a critical error he committed. In the fourth inning, Milwaukee scored four, but three of those would not have scored if Castillo had cleanly fielded and recorded an out on a grounder hit back to him by Ryan Braun. Instead, Braun reached on the error, and after what should have been the third out, Keston Hiura stepped up and homered off of Castillo.

While Castillo’s defensive gaffe let his team down, Yelich prevented what could have been a bigger Reds rally in the third inning. Freddy Galvis led off with a single, one of his three hits, and one out later Phillip Ervin doubled. With runners on second and third and one out, Nick Castellanos launched one to deep left field. Yelich made a stellar catch, robbing what could have been an extra-base hit. Instead of two Reds runs in and a runner on second with only one out, Yelich’s grab became a sacrifice fly that scored only Galvis. Ervin was left at second when Eugenio Suarez then lined out against reliever Josh Lindblom.

The NL Central-leading St. Louis Cardinals were off today. Milwaukee’s win over Cincinnati and a Chicago defeat at San Diego left the Brewers and Cubs tied for second, a game and a half behind. The Reds fell to five games off the pace. 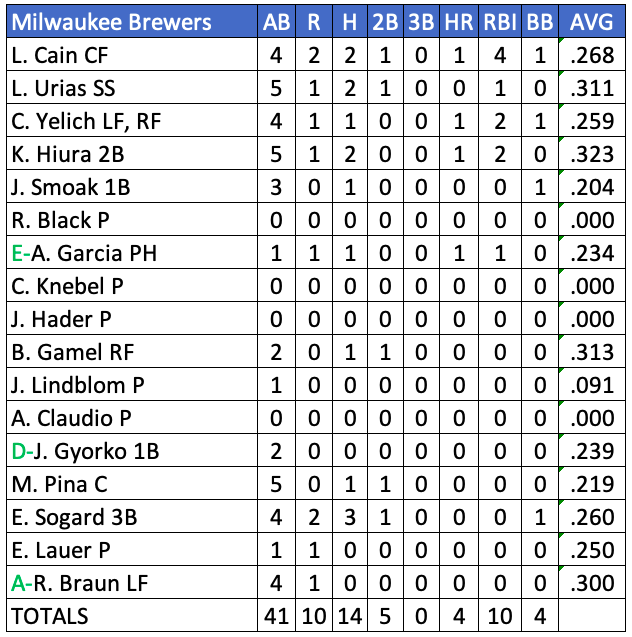 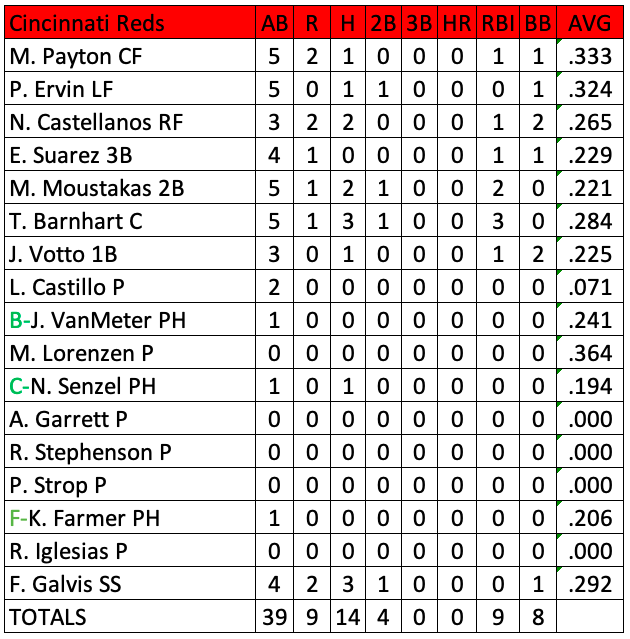 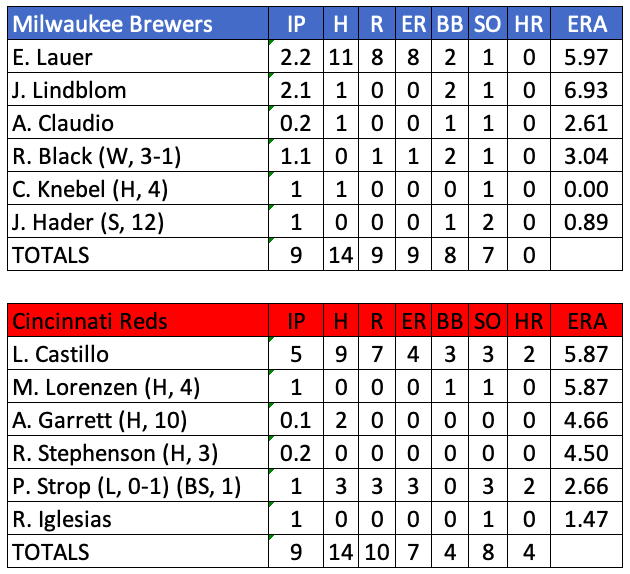 Standings following the May 14 games:

The 2020 schedule as currently constituted has the Reds hosting the Milwaukee Brewers at Great American Ball Park Friday for the second game of the four-game series. Sonny Gray will pitch for the sim Reds, while righthander Adrian Houser pitches for Milwaukee.

Earlier today we discussed some of the news learned about Wednesday’s meeting between MLB and the MLBPA and some of the safety plans put in place to try and make bringing baseball back as safe as possible. But since that piece was published we’ve had more information come out from that meeting.

Tom Verducci of Sports Illustrated reported earlier this afternoon about the testing of players and staff, which was missing a lot of information from the previous reports. MLB is partnering with The Sports Medicine Research and Testing Laboratory to provide the tests that would be used for players and staff required to play a game (including ballpark workers).

MLB.com and Out of the Park Baseball are teaming up for another Dream Bracket. This time they are using a team, or multiple teams from a franchise in a 64-team tournament. The Cincinnati Reds will be represented by the 1975 and 1990 versions in this one. In the first round the 1975 Reds are matched up with the 2007 Colorado Rockies. The 1990 Reds get a tough match up as they take on the 1994 Montreal Expos.