Three hits apiece from Mark Payton, Tucker Barnhart and Joey Votto led a relentless Cincinnati Reds (20-23) offensive attack which defeated the Miami Marlins (16-28) by a 14-7 score at Great American Ball Park. The three-game sweep of the Marlins was the first for the sim Reds this season.

The sim Reds took the lead for good in the bottom of the second. With the score tied at 2-2, Freddy Galvis led off with a walk, and Payton launched his second home run over the wall, giving the home team a 4-2 lead. Other offensive highlights for the winners included a two-run home run by Phillip Ervin following a Payton double in the fifth, and doubles by Mike Moustakas and Votto.

Unfortunately, Jesse Winker suffered an injury in the sixth inning while batting against Jose Urena. Winker hit a line drive that was caught for an out, but was injured on the play. He will miss the entire upcoming four-game series against the Brewers.

Winning commenter/manager BK now has seven wins in that role, tops among Redleg Nation participants, and it was his third straight win. BK made the unconventional move of appointing some of his fellow Redleg Nation readers as members of his coaching staff prior to today’s game — a move which clearly paid dividends. Because he submitted a winning lineup today, BK will have priority for submitting Thursday’s lineup.

The St. Louis Cardinals defeated Pittsburgh for the second straight day, while the Chicago Cubs lost their third straight to Milwaukee — moving St. Louis ahead of Chicago into undisputed possession of first place in the NL Central. The Cubs are one game back, Milwaukee two back, the Reds 4.5 back, and Pittsburgh six games back. 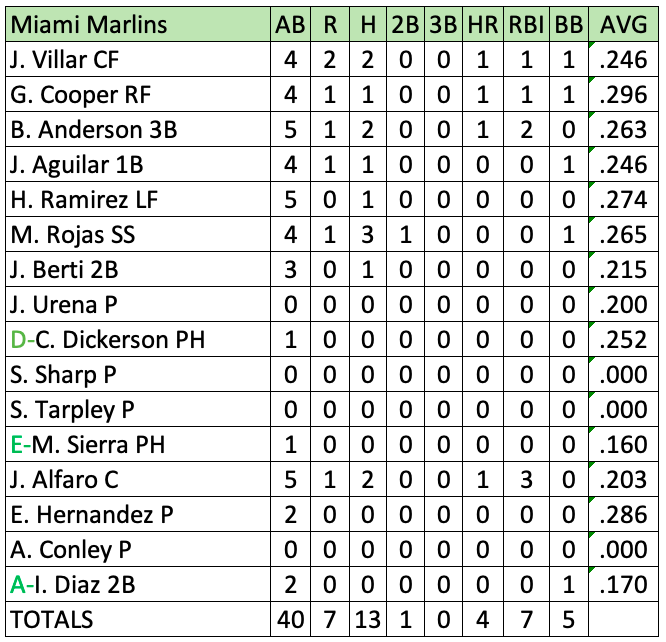 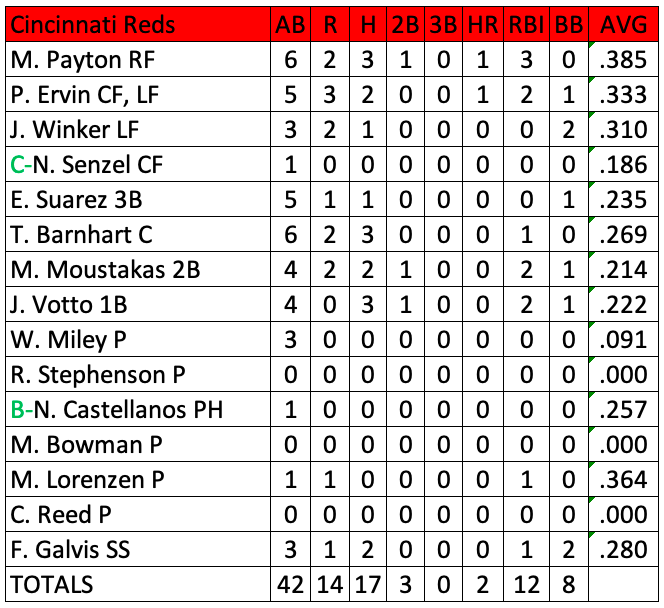 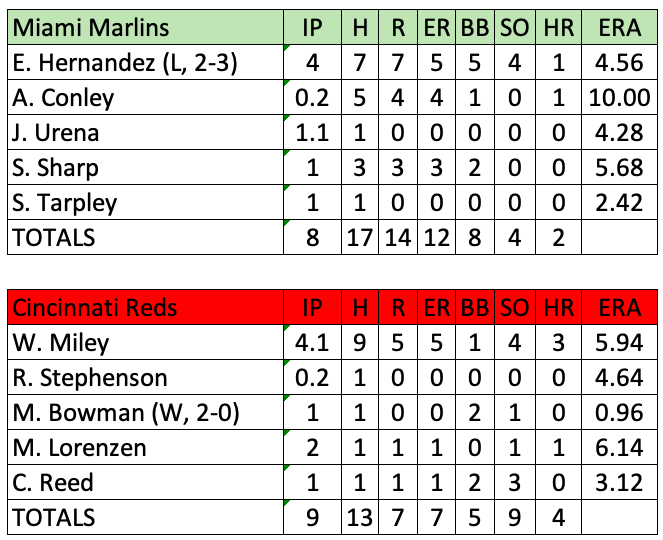 Standings following the May 13 games:

The 2020 schedule as currently constituted has the Reds welcoming the Milwaukee Brewers to Great American Ball Park for what must be characterized as an important early-season four-game series due to the tightness of the standings. Luis Castillo will pitch for the sim Reds in the opener Thursday, while lefthander Eric Lauer pitches for Milwaukee.

Starting tonight, Fox Sports Ohio will be rebroadcasting the Cincinnati Reds destruction of the New York Yankees in the 1976 World Series. The sweep saw The Big Red Machine outscore their opponent 22-8 over the four games, with Johnny Bench going wild – hitting .533 and slugging 1.133 during the series. Dan Driessen, George Foster, and Joe Morgan all saw an OPS of at least 1.000 during the series, too.

Relive the #BigRedMachine's triumph over the Yankees in the 1976 World Series with us this week on FOX Sports Ohio!

A 5-round draft is shortsighted, pound foolish

Craig Edwards of Fangraphs looked into the reduction of the 2020 Major League Baseball draft and how it’s reduction to just five rounds is ill thought out and doesn’t really save that much money overall. He uses Jacob deGrom as his ultimate example of a “what if” scenario of the potential consequences.

It might be unfair to cite the Met’s 2010 draft because deGrom is an unquestionably great success and not generally representative of the kind of players teams take in rounds six to 10. He’s also a player who might not even be in the big leagues if there weren’t at least 10 rounds in the 2010 draft.

The players major league teams are passing on this year might not make it back to them in future years. The October after deGrom was drafted, he had Tommy John surgery. If there had been just five rounds the year he was actually drafted, deGrom very likely goes back to school for his senior year. There’s a decent chance he would have still needed Tommy John surgery at some point and it quite likely would have been before the draft. If deGrom was coming off an injury-riddled senior season, or hadn’t pitched at all due to a surgery that would have kept him out a full year after the draft, he might well have gone undrafted and potentially pursued a career outside of baseball with his college degree. The winner of the last two NL Cy Young awards might not even be playing baseball with a five-round draft in 2010.

It was an interesting thought process to go through. The odds aren’t good that it will happen that way – but the fact that it could really sucks given how little actual money is being saved here.

Stan Musial and a called shot in the All-Star Game

Let’s end the notes today with a fun look back at history via Tim Kurkjian of ESPN. Earlier today he wrote a quick note about Stan The Man and the 1955 All-Star Game. The game took place in Milwaukee and the game went to extra innings. It was the bottom of the 12th and Musial came to the plate and told American League catcher Yogi Berra, “I’m going to end this thing right here. Yogi, I’m tired, it’s time to go home.” And he wasn’t kidding, either. The 24-time All-Star did just that as he crushed a home run to walk it off and indeed, go home.