The first seven innings of today’s game were shaping up very similar to yesterday’s 6-3 Colorado victory. The sim Reds trailed 5-3 after seven innings today, but unloaded on the Rockies bullpen with four runs in the eighth and seven in the ninth. Two-run singles by Freddy Galvis and Jesse Winker sparked the four-run rally in the eighth. Eight Reds singles and two walks in the ninth produced seven more runs. Ironically, with only one out in the top of the ninth and seven Reds runs in, the Rockies inserted catcher Drew Butera to pitch, and he struck out Phillip Ervin and Tucker Barnhart to prevent further damage. Cincinnati needed the insurance runs in the ninth, as David Dahl hit a grand slam off Michael Lorenzen in the bottom of the ninth in what can be best described as a typical Coors Field game.

Winning commenter/manager James Owens got fantastic production from the top of his batting order. Shogo Akiyama, Jesse Winker, Nick Castellanos and Eugenio Suarez combined for 12 hits and seven RBIs among them, giving sim Reds fans a glimmer of the kind of offense they hope to see when the actual season opens.

The Chicago Cubs lost 7-6 to the Washington Nationals today, and the rest of the NL Central teams capitalized by winning their respective games. The gap between first and last place in the division is now only six games. 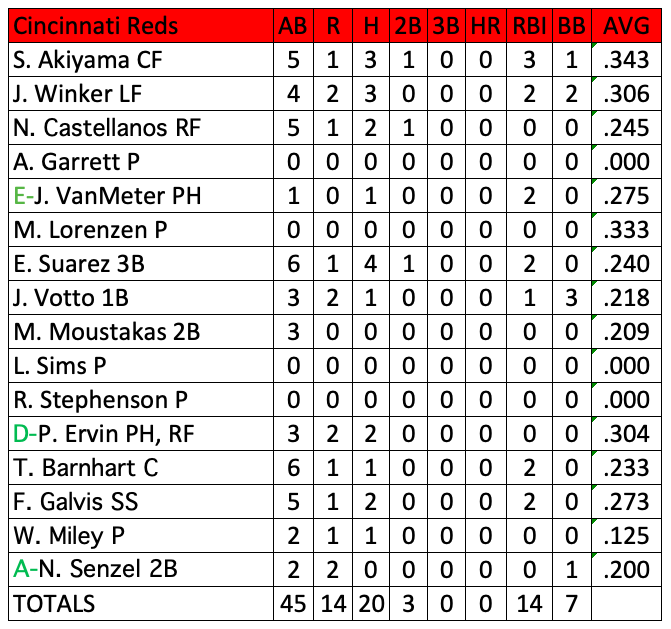 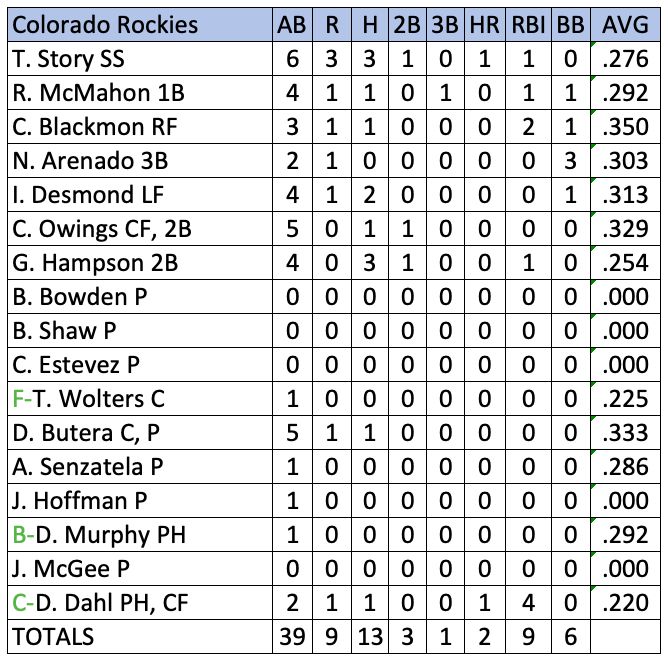 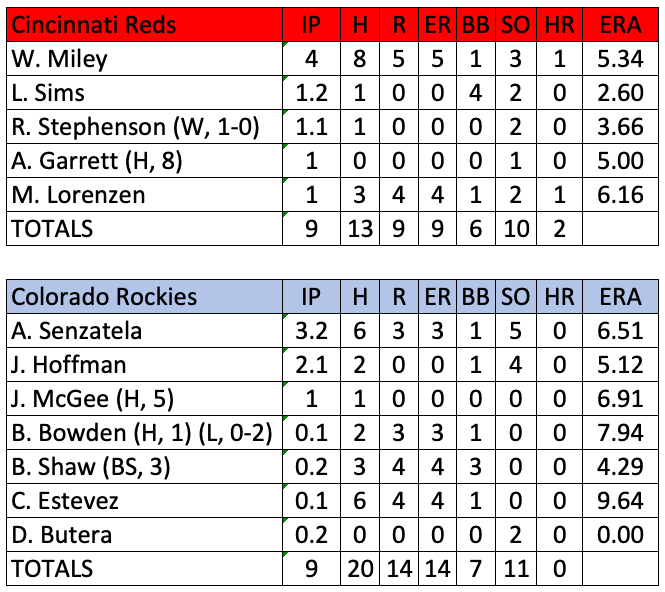 Standings following the May 8 games:

The 2020 schedule as currently constituted has the Reds playing game three of the four-game series at Coors Field Saturday against the Colorado Rockies. Luis Castillo will pitch for the sim Reds, while right-hander Chi Chi Gonzalez pitches for Colorado.

James Owens has the priority for lineup selection for Saturday because he came up with the winning formula for today’s game. Have fun with this! If you have any questions, please post them in the comment string below. Here are the “managerial records” of our Redleg Nation participants to date:

The All Do Over Team

Over at The Athletic this morning, Marc Carig and Andy McCullough put together an article on Baseball’s All-Second-Chance Team. The catch, however, is that the players needed to be active, and they also needed to create a 26-man roster. Players needed to have previously been released, waived, exposed to the Rule 5 draft, or “otherwise exposed to the other 29 teams” – though I can’t quite figure out what that last one entails that isn’t covered by the previous options (perhaps minor league free agency?). Only one former Red made the list, and funny enough, that’s his nickname. Red. Of course we’re talking about Justin Turner.

The Reds didn’t make the biggest mistake with regards to Justin Turner. After being selected by Cincinnati in the 7th round of the 2006 draft, he was traded in December of 2008 in a package that brought back catcher Ramon Hernandez, who spent three seasons in Cincinnati. The Orioles would eventually put Turner on waivers, where he was claimed by the Mets. He didn’t exactly put things together with New York before reaching free agency after the 2013 season. That’s when he signed with Los Angeles and figured out hitting the ball in the air was a good idea, and over the last six seasons he’s hit .302/.381/.506 for the Dodgers – good for a 139 OPS+. His career before arriving in LA? He hit .260/.323/.361 – good for a 92 OPS+.

Jim Callis, Jonathan Mayo, and Mike Rosenbaum looked at each teams best small school draft pick over at MLB.com on Thursday afternoon. For the Cincinnati Reds they chose Reggie Sanders. This list is for college picks only, of course, as every high school is “small” by comparison.

The draft dates back to 1965, so while we are dealing with a lot of history, and a lot of players, it’s only about half of baseball’s history that we are looking at. Reggie Sanders went to Spartanburg Methodist College. If you’ve never heard of it, you probably aren’t alone. But it’s helped produce nine future Major Leaguers, including three that you’d almost assuredly heard of. Sanders, of course, but the school also saw Mookie Wilson and Orlando Hudson on their field. Hudson was selected and signed out of the 1997 draft by the Blue Jays from the school. Wilson moved on to play at South Carolina where he was drafted in the 2nd round in 1977 by the Mets.

But it was Reggie Sanders that had the best career of any player from the school. Sanders played in 1777 Major League games and posted 39.8 WAR in his career. Wilson would post a 22.4 career WAR in his 1403 games, while Hudson was between the two with 30.9 WAR in his 1345 career games. Sanders would spend parts of 17 seasons in the Majors, hitting .267/.343/.487 with 305 home runs and 304 stolen bases in his career – one of just eight players to top the 300 mark in both categories in Major League Baseball history.