As I’m sure everyone is aware, real baseball is happening on the other side of the world and in our nocturnal hours. I’ve decided to adopt the NC Dinos as my team mostly because I recognize Aaron Altherr, but also because the team’s fans once tried to burn down the stadium. I respect that kind of chaotic energy.

Friday, May 1: Reds at Nationals 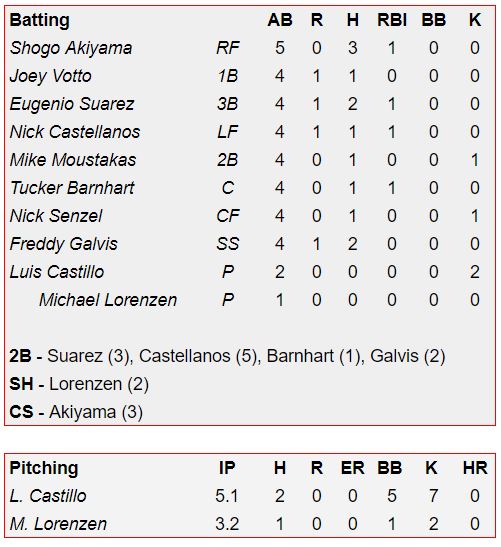 The Game (4-0 win): After dropping four straight, the Reds ace gets them back on track with solid, but laborious, outing. Luis Castillo blanks the Nationals for five innings, but his five walks add up and the Reds turn to Michael “Fireman” Lorenzen to go the rest of the way. Lorenzen pitches 3.2 shutout innings of his own to keep the goose egg intact. As for the offense, every position player records at least one hit and the Reds go on a doubles parade, netting four two-baggers. Freddy Galvis has slipped in to the lineup like he was never gone, and the Reds fortunes are looking up (even if my own are sadly slipping as I was supposed to go to all three of these D.C. games 🙁 ).

The Guy: While leadoff hitter Marquis Grissom would certainly be a fascinating guy to highlight, I’m going to take this opportunity to promote Jeff Fassero instead. Despite not breaking into the majors until his age-28 season, Fassero had a long, successful MLB career, pitching for 16 seasons and accumulating 23.7 bWAR. Fassero broke in as a reliever, posting sub-3.00 ERAs in his first three seasons from the pen before taking the starter’s mound at age 31 and posting ANOTHER sub-3.00 ERA season (2.99 but we’ll count it). Fassero spent five seasons as a decent No. 3 starter after that for both the Expos and the Mariners, even becoming the first pitcher to get a hit in M’s history in 1997, before losing his feel and transitioning back to the bullpen. From there, he bounced around the league for another decade, finally retiring in 2007. Oh, and if the name sounds familiar, Fassero was the Louisville Bats pitching coach from 2016 to 2019.

Saturday, May 2: Reds at Nationals 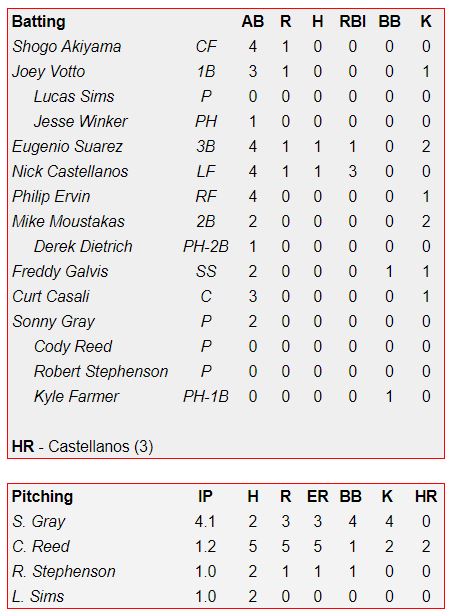 The Game (9-4 loss): On an absolutely gorgeous day in D.C., the Reds get sliced, diced, and made into a stew by the defending World Champions. The afternoon started off pleasantly enough: the Nationals booted their first two fielding chances and Nick Castellanos hit a three-run bomb, putting the Reds up 4-0 at the end of the first. But the early season complete games are starting to get to the Reds starters methinks because David Bell gives another early hook, pulling Sonny Gray in the fifth. His replacement, Cody Reed, gets lit up for five runs, putting the Reds in an 8-4 hole that they will not get out of. In fact, the Reds can’t even manage another hit after the first inning, only netting two on the day.

The Guy: Quick: Who of the dynastic A’s of the late 80s assumed the role of captain?

Well, I’ll be: you’re right! The A’s captain was neither the speedster, the brawn, nor the arm, but none other than Carney Lansford, a slick-gloved, contact-hitting third baseman. For his career, Lansford won an American League batting title in Boston before the up-and-coming Wade Boggs prompted the club to send him out West. During his peak years of the mid-80s, Lansford regularly hit over .300 and led the league in fielding percentage three times between 1987 and 1990. He never won much for those feats though, garnering MVP votes a couple of times but ultimately settling for a single All-Star appearance and Silver Slugger award over his 15-year career.

As for fun facts, Lansford has a couple. First, remember the scene at the end of Angels in the Outfield where the White Sox Kit “Hit or Die” Kesey is at the plate? Yep, that’s Lansford playing the meanest hitter in the league. Also, Lansford played in the 1969 Little League World Series, losing to Taiwan but becoming one of only 14 players to have playd in the LLWS and the World Series. Lastly, he’s related to Sir Francis Drake somehow, which maybe explains why Boston didn’t want him.

Sunday, May 3: Reds at Nationals 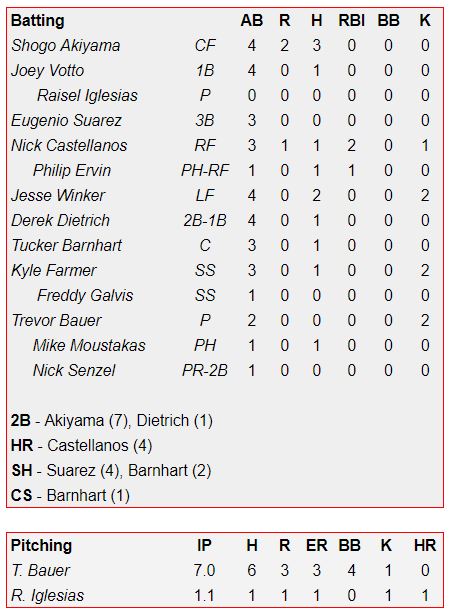 The Game (4-3 loss): Despite another homer from Nick Castellanos and an excellent day at the plate from Shogo Akiyama, Raisel Iglesias gives up a walkoff home run in the ninth and the Reds drop the series. Trevor Bauer pitched a solid, if uninspiring, game, going seven innings and giving up three runs. It was enough to get the Reds to the bottom of the ninth all locked up, but Iglesias gave up a solo shot to the second batter he faced in his second inning of work. With the loss, the Reds fall to 3.5 back of the Cubs, still third in the division thanks to a Milwaukee skid.

The Guy: In general, you can learn a lot about a player from the back of their baseball card. For example, when researching Marv Breeding to write this blurb, I learned that he led the PCL in stolen bases in 1959, that his fielding plays “kept the fans buzzing,” and that he has a degree in physical education. Who knew? However according to Marv’s 1962 baseball card, he suffered the “sophomore jinx” after his successful rookie year. Even though “his average dropped sharply, he was still one of the smartest fielders in the American League.” In 1963, with Marv now on the Washington Senators, the back of his baseball card decided to revisit that PCL stolen bases fact because, well let’s face it, Marv’s career .248 batting average wasn’t doing him any favors. Marv retired after 1963, with 3.1 career WAR to his name. But boy oh boy did he lead the PCL in stolen bases in 1959.

Monday, May 4: Reds at Mets 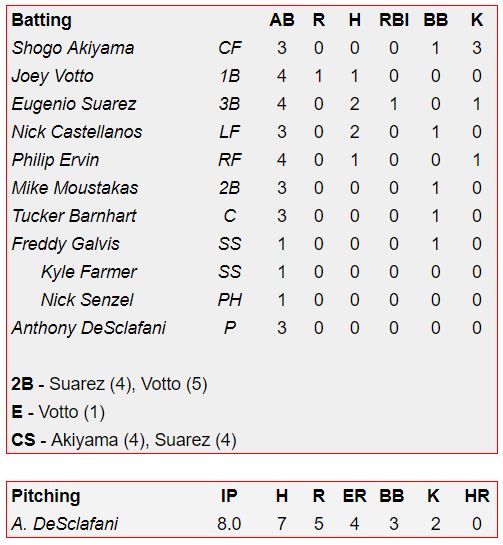 The Game (5-1 loss): Well, this week’s real-life Reds game worked against our fake Reds, but at least the real Reds won back in the day? Anthony DeSclafani pitched fine: eight innings and five runs given up, with three walks and two strikeouts. Nothing to fawn over really. But the offense once again went frozen. Joey Votto and Eugenio Suarez both doubled, leading to the Reds only run, but it was crickets after that. The team couldn’t even take advantage of five free passes issued by the Mets. Mike Moustakas in particular has been a massive disappointment nearly a quarter of the way through the season, hitting only .204/.276/.274.

The Guy: Hersh Martin was a Quad-A player through and through. He signed with the Cardinals at age-22 but broke into the big leagues with the Phillies in 1937 when he was 27 years old. Martin played well those first couple of seasons, even earning an All-Star nod in 1938, but a trade to the New York Giants in 1940 banished him back to the minor leagues. Then, the war. With so many players enlisting to fight in World War II, Martin got his second shot at the bigs with Yankees in 1944. He was 34-years-old and the Yankees starting left fielder at time when many looked to baseball for a sense of normalcy. Maybe that’s why he was Bud Selig’s favorite player. Martin was sent back to the minors after the 1945 season and continued to play ball until 1953. All told, Hersh Martin played 31 years of professional baseball.

Tuesday, May 5: Reds at Mets 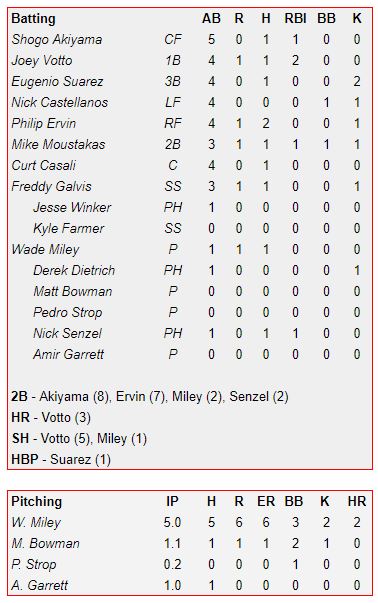 The Game (7-5 loss): The Reds are slippin’, stumblin’, fallin’ face first right now. Wade Miley gets lit up for five innings, and even though the offense provides four doubles and a homer, it’s not enough. With Alex Blandino coming off of the Injured List after this game, Kyle Farmer is optioned to Louisville. It’s Farmer’s last option, but the highly versatile defender just hasn’t gotten it done at the plate, with a batting average that bests exactly two Reds pitchers and no one else.

The Guy: I wrote about Ralph Kiner a couple of weeks ago in one of these blurbs, so now it’s his lesser-known but perhaps more highly regarded teammates turn. Wally Westlake broke in with the Pirates in 1947, coming up around the same time the team brought in Hank Greenberg and Ralph Kiner. Westlake was also a power hitter and known as a good defensive outfielder, which proved fortuitous later in his career. When Branch Rickey took over as the Pirates GM, he believed the Westlake had the highest trade value of any of the players due in part to his great dislike of Kiner. Eventually, Rickey did trade Westlake, sending him to the St. Louis Cardinals.

After a rough season, the Cardinals traded him to the Reds, where he only managed a .202 average in his one season. The Indians claimed him on waivers because of his defensive ability, which put Westlake in the position to be one of the first players to watch film of himself. Hank Greenberg, then the manager of the Indians, had Westlake filmed at the plate against his knowledge, later going over the tape to fix the slugger’s swing.

Wednesday, May 6: Reds at Mets 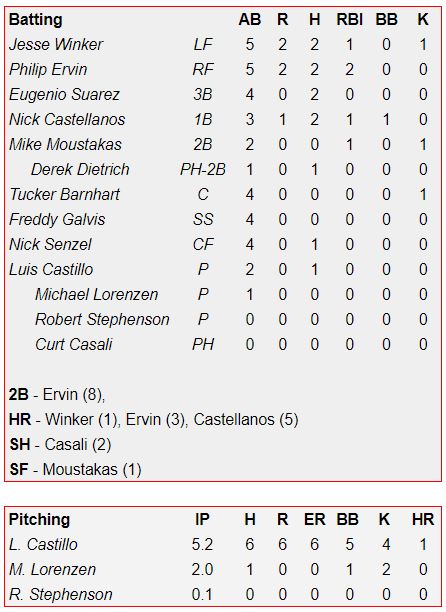 The Game (6-5 loss): This week really just did not go according to plan. The bats woke up today with three home runs, but two were solo shots. Luis Castillo just didn’t have it on the mound, and even though Michael Lorenzen kept the game within reach for a potential comeback, it wasn’t in the cards. With another close loss, the Cardinals have officially passed the Reds in the standings. The only saving grace I guess is that the Brewers are in a harder free fall than the Reds are?

The Guy: The guy this week is less a random historical figure, and more of an immediate part of the Reds family. That’s right, manager David Bell’s father, Buddy Bell, homered and doubled in the real game, giving the Rangers a shot at winning but coming up short. Buddy Bell grew up in Cincinnati, attending Moeller High School before Ken Griffey Jr. or Barry Larkin walked the halls. During three seasons on varsity, Bell hit for a .410 average, leading Cleveland to draft him in 1969.

Bell cracked the majors as a 20-year-old kid and was named an All Star in his second season. But the true meat of his career came from 1979 to 1984, when he won six Gold Gloves in as many seasons, earned four All Star nods, and a Silver Slugger in 84. From 1972, his rookie year, to 1984, Bell never had a season where he finished with less than 2.0 WAR and recorded more than 6.0 WAR four separate times. Bell played for the Reds for a few seasons after that torrid run, but never quite captured the same magic. Eventually, he lost his starting spot to the up-and-coming Chris Sabo, was dealt to Houston, and played one more season before hanging it up. Nowadays, Bell is an advisor to Dick Williams, but you probably already knew that.

Nick Castellanos continues to trend upward while Mike Moustakas heads the other direction. After another appearance where he got lit up, Cody Reed is on thin ice in the Reds bullpen.