Lack of offensive punch continued to plague the Cincinnati Reds (16-21), who fell to the Colorado Rockies (15-21) by a 6-3 score at Coors Field.

The sim Reds scored first in the top of the third on a single by Kyle Farmer, a successful sacrifice bunt by losing pitcher Anthony DeSclafani, and a run-scoring hit by Shogo Akiyama. But the Rockies unloaded on “Disco” in the bottom of the inning with three consecutive doubles and an RBI single by David Dahl to take a 3-1 lead. Colorado extended the lead to 6-1 before the Reds next crossed the plate.

In the top of the sixth, the first three Reds sim batters singled, and Nick Castellanos followed with a sacrifice fly to pull the Reds within three. But Freddy Galvis grounded into a double play to end the inning and the scoring for Cincinnati.

The Reds and Brewers were the only NL Central teams in action today, and both lost. The Reds are now 6.5 games behind first-place Chicago, and only one-half game ahead of last-place Pittsburgh. 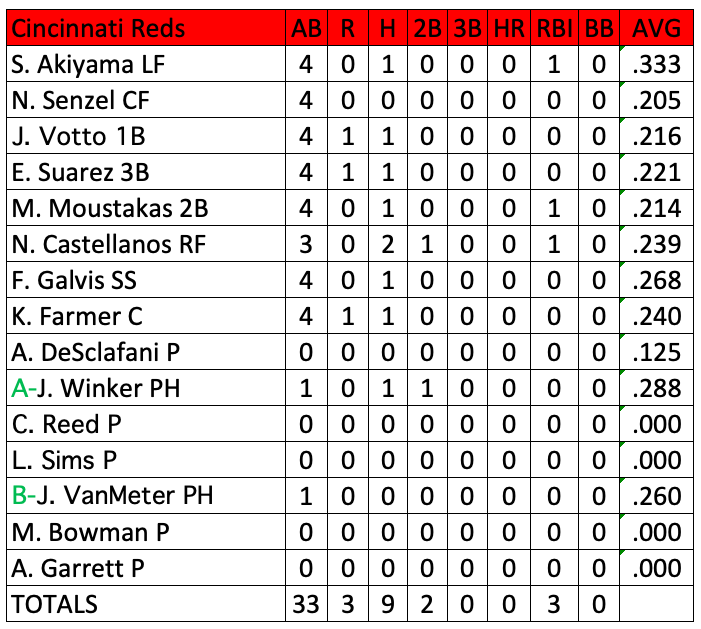 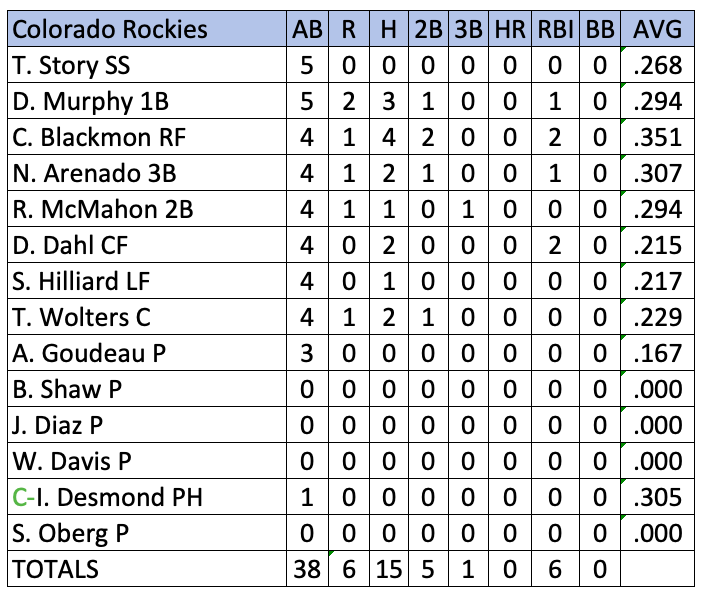 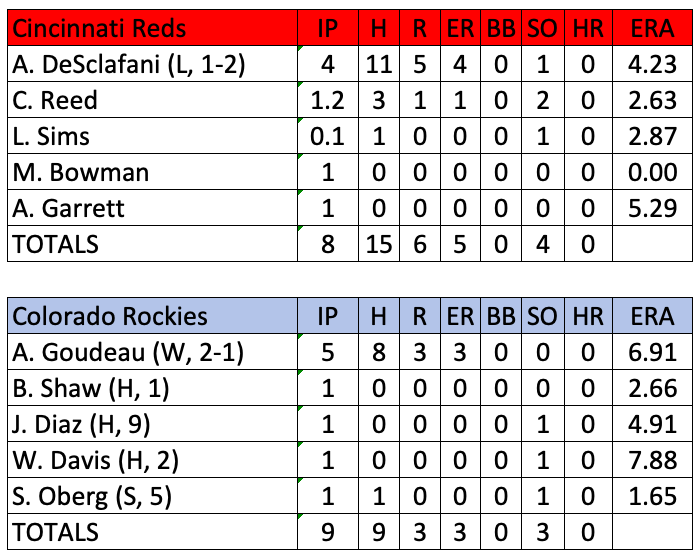 Standings following the May 7 games:

The 2020 schedule as currently constituted has the Reds playing game 2 of the four-game series at Coors Field Friday against the Colorado Rockies. Wade Miley will pitch for the sim Reds, while right-hander Antonio Senzatela pitches for Colorado.

Craig Edwards of Fangraphs looked at how having a DH for 2020 tends to harm National League teams. The Cincinnati Reds, however, weren’t one of those teams. As we’ve discussed before, the Reds seem to be a team that would benefit the most from the situation. Edwards used Jesse Winker as the Reds DH in the model and article, and with that option, it makes the Reds the second most beneficial team in the National League.

Buster Olney had a tweet this afternoon noting that at least one MLB ownership group, which was unnamed, has instructed the front office to cut payroll for 2021. This isn’t entirely surprising given that revenues will be down for all teams in 2020, and probably 2021, too. We may take a bit of a deeper dive into this one in the near future.

At least one MLB ownership group has instructed its front office to cut its payroll in 2021. A lot of club execs expect others to follow. The youngest players (who are paid little, per CBA agreement) and the players with existing long-term deals won't necessarily be affected.

Earlier today we discussed that Major League Baseball seems set to send formal plans to the Major League Baseball Players Association within the next week about a plan to try and get baseball started back up again. There are a lot of things that still need to happen before that plan could be finalized, and some unknowns that could potentially derail it, too. But MLB is moving forward with what they know and can control and will see what the Players Association has to say about it soon enough.