Nick Senzel broke out of a season-long slump with a bang, leading the Cincinnati Reds (14-19) to an 8-2 victory over the Washington Nationals (22-11) in the nation’s capital.

Senzel went 3-for-4 at the plate, including his first double and second home run of the season, raising his batting average over the .200 mark. It was the second consecutive game for the Reds with 13 hits against a Nationals pitching staff with a reputation for excellence.

An early Washington rally was diffused by starter and winner Wade Miley, and that turned out to be a key turning point. In the bottom of the second inning, five of the first six Nationals batters reached, with two runs scoring. Miley, however, righted the ship by striking out Adam Eaton and inducing Starlin Castro to hit an inning-ending flyout with no additional runs scoring.

The sim Reds struck back in the top of the third on an RBI single by Phillip Ervin, and took the lead for good in the top of the sixth. Nick Castellanos led off the inning with a single, and one out later, Senzel — who winning commenter/manager BK said he inserted in the lineup “to leverage his abilities to hit lefties” — took Nationals starter Patrick Corbin over the fence for a two-run homer.

Cincinnati then scored five insurance runs against former Red Tanner Rainey and Wander Suero over the final three innings to leave no question about the outcome.

The sim Reds victory stopped a four-game losing streak, and allowed the visitors to avoid a three-game sweep at the hands of the defending world champions.

With the win, the Reds maintained fourth place in the division, as all other NL Central teams besides St. Louis were victorious. 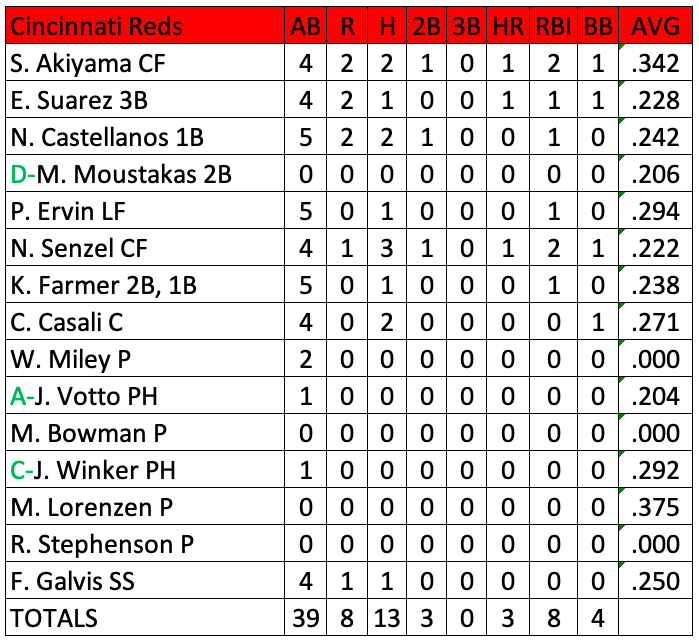 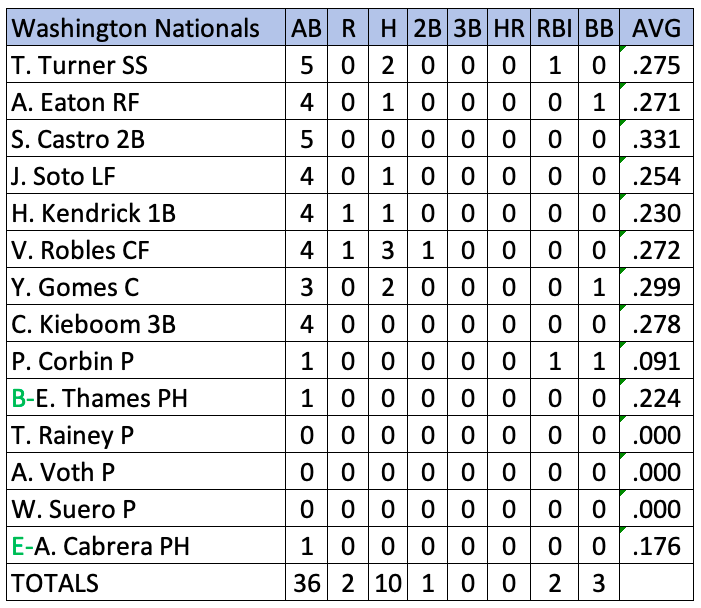 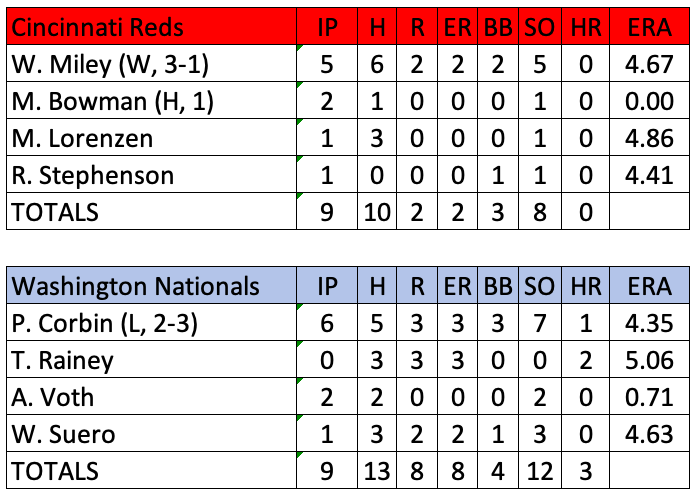 Standings following the May 3 games:

The 2020 schedule as currently constituted has the Reds moving on to New York to play the first of a three-game series against the Mets Monday. Luis Castillo will pitch for the sim Reds, while righthander Jacob deGrom will pitch for the Metropolitans.

BK has priority today if he wishes to submit another lineup, since he was a winning commenter/manager today. Have fun with this! If you have any questions, please post them in the comment string below. Here are the “managerial records” of our Redleg Nation participants to date:

A hiccup to baseball starting up?

Major League Baseball has just one team in Canada – the Toronto Blue Jays. Their Prime Minister, Justin Trudeau, was speaking about the NHL attempting to resume their season – and one of the plans the NHL has spoken about is having “hub cities”, which includes two Canadian cities as options – and noted that “at a minimum, players would need to follow quarantine protocols if they were to arrive in Canada while the border remains closed due to the pandemic.”

The NHL is looking to try and get opened back up before Major League Baseball’s proposed “late-June, early-July” timetable, so things could change there. But if Canada is going to keep their borders closed into the baseball season, that would certainly be a major issue for the Toronto Blue Jays if they were to try and operate out of Toronto.

The 10 strangest trades in MLB history

Anthony Castrovince of MLB.com looked at the 10 strangest trades in the history of baseball on Saturday. Some of them I have heard of. A few of them I had not. Some of the trades were for a turkey, a literal bag of baseballs, a fence, some oysters, and even a suit! It’s a fun read, so be sure to go check it out.

A fun piece of trivia

At fangraphs today we got their “Sunday Notes” column from David Laurila and within is an interesting look at three Dodgers pitchers – Clayton Kershaw, Sandy Koufas, and Dazzy Vance. The author goes into the impressive, and probably underrated career of Vance and drops in this awesome stat:

I think it could be argued that Vance had the better career. While Koufax obviously had an iconic six-season stretch, Vance’s seven strikeout titles were consecutive, and in one of those years he had 262 punch outs while the league’s runner up had just 135.

That’s almost as impressive as Pedro Martinez and his 2000 season ERA title, where if you literally doubled his ERA he still would have led the American League in ERA by 0.22 over Roger Clemens.