Strat-O-Matic, the company that is staging the simulated 2020 Major League Baseball season in which Redleg Nation is participating, is using projected 2020 player statistics as the basis for each individual player profile.

This differs from the presumption this author has had all along that 2019 actual statistics were in each player’s performance profile card. (Much more on this below.) The presumption was based on your author having played the game for several seasons many years ago, and for each season, a new set of player cards was issued based on each player’s actual statistics. For example, a game released in 1984 would have been based upon statistics for each individual player’s 1983 performance — the most recent full season.

We learned this rather unexpectedly, after receiving an email from Strat-O-Matic stating that because the sim Reds would play games on 17 consecutive days following today’s off-day, Redleg Nation would need to call up an eighth relief pitcher and option a position player.

(If you would like to participate in the selection of the pitcher who will be recalled and the position player to be sent down, see the comment thread on this article. A final decision will be made based on the votes cast there by late evening on Thursday, April 30.)

I asked Strat-O-Matic for a list of the pitchers who were available to be recalled, and that list included Ryan Hendrix, a righthanded pitcher who has never appeared in a major league game. We have the option of any pitcher on the current Reds actual 40-man roster, they said, and that includes Hendrix.

Still under the presumption that all of the player profiles were based on past performance, I replied, “I am curious – Hendrix has never pitched in the big leagues. What kind of card do they give him?”

“Every card we’re using is created based on projected stats for the upcoming year. So rookies such as Hendrix and Akiyama are able to have cards despite not playing in MLB before,” my Strat-O-Matic contact replied.

“Yes all are projected,” the Strat-O-Matic contact person wrote. “The source is Strat-O-Matic’s advanced team of cardmaking experts.”

A few minutes later, he again replied, “Send me some stats, we’ll make you a .pdf card of you!”

That was an offer too good to pass up. Hmmmm, what statistics to send … maybe Ken Griffey Jr.’s lifetime batting statistics? Jose Rijo’s 1990 pitching statistics? No … I actually do have some statistics of my own.

In 1986, I participated in the Cincinnati Reds’ first-ever Dream Week fantasy camp, where average joes could pay to spend a week with Reds coaches, players and legends at the spring training facility. The campers were divided into teams drafted by “managers” that included Joe Nuxhall, Wayne Krenchicki, Ed Bailey and Jim O’Toole. My participation was as a member of the print media, and I wrote a daily “diary” of my experiences.

A kind way to describe my level of athleticism is “not gifted.” But I got to put on a Reds uniform and play in games at the Redsland Field complex in Tampa and Al Lopez Field. Being a lifelong sports statistics geek, I kept my own statistics and reported these lines in my final daily diary:

I sent THOSE statistics to Strat-O-Matic, and lo and behold, they DID send back PDFs of my player cards for use in playing the game. I thought this might be a good way to illustrate how the game is played.

The manager of the team that is batting usually rolls the dice. Let’s say the blue die roll is a 1, and the combined total of the two white dice is 4. With those numbers in mind, the game players refer to their cards of the pitcher who is currently pitching and the batter who is currently batting. Examples: 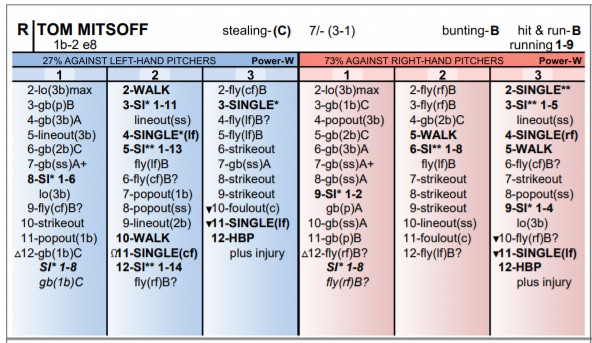 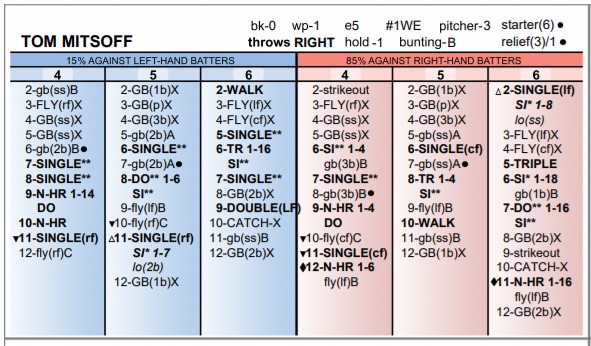 In the case of the cards above, let’s presume I am batting against myself. Because the blue die roll was 1, we’d go to the 1 column on the right side of the batting card because I am facing a righthander. Then, since the combined total of the white dice roll was four, we look down to the “4-” result in the 1 column against righthanded pitchers. The result is “popout(3b),” so I hit a pop-up out to the third baseman.

This pattern continues throughout the entire game, with results being taken from the pitcher’s card when the blue die roll is numbers 4 through 6. In effect, this means the batter and the pitcher each have a 50 percent chance of having their statistical profile determine the outcome of each at-bat.

For the current 2020 season simulation, all of the dice rolls and other random chance elements of the game are done by computer algorithm.