Just as we’ve settled into the slog of this quarantine (my mom likened it to the movie “Groundhog Day,” which seems apt), the Reds have settled into the slog of the season. The shininess and gleam of a new baseball season has worn off, and these Reds are stuck in the doldrums of .500 baseball. It’s a great feeling to be good, a bad feeling to be bad, but it’s absolutely miserable to be uninteresting.

If you missed the explainer of this little project, you can find it here and last week’s results here. To give the Sparknotes: I will be randomizing every Reds game by picking a historical box score and subbing in the current Reds. As you might guess, these randomizations are not meant to be realistic, unlike Tom Mitsoff’s Strat-o-Matic simulation exercise. I just want people to remember how absurd baseball can be and maybe learn about some guys from years gone by. Also, maybe the Reds will stop losing one of these days? Please? 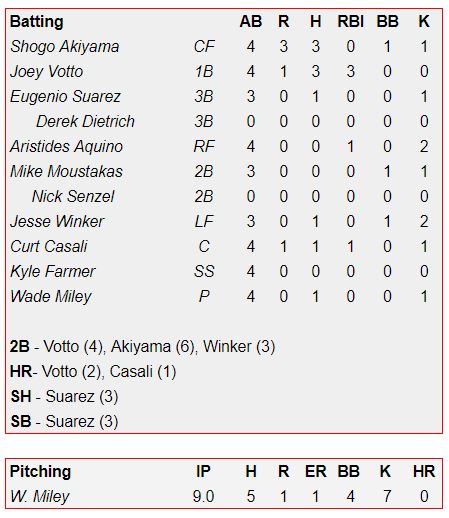 The Game (5-1 win): Homers from Joey Votto and Curt Casali lead the offense as Wade Miley throws another complete game to kick off the homestand. Votto takes home MVP honors, going 3-4 with the homer, a double, and three RBIs. In his 2020 debut, Aristides Aquino drops an 0-fer with two strikeouts, but does manage an RBI on a fielder’s choice. Other offensive highlights: Shogo Akiyama goes 3-4, Jesse Winker doubles, and Eugenio Suarez seizes sole possession of second place on the stolen base leaderboard.

The Guy: Raise your hand if you’ve ever heard of Mike Schmidt. Hm, that’s everybody? Well then this might not be the most interesting guy to remember.

Yes, Joey Votto’s real-life counterpart in this one was the legendary Phillies third baseman, who accumulated 106.9 bWAR across 18 seasons. Schmidt did it all, leading the majors in home runs six times, in OBP twice, winning 10 Gold Gloves, six Silver Sluggers, three MVPs, and one gooooool-dennnnn ring. (Well, two if you count his World Series MVP as a second ring.) Schmidt retired at the end of May in 1989, not happy with his subpar start to the season, yet fans still voted him as the NL’s starting third baseman for the All Star Game. Schmidt was inducted into the Hall of Fame on his first ballot, but perhaps more impressively, Baseball-Reference ranks his mustache #6 all-time among baseball mustaches. 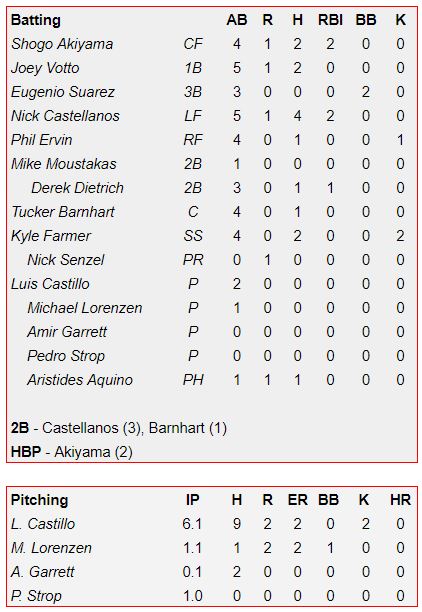 The Game (5-4 win): After taking a day off to clear his head and shake off his early season struggles, Nick Castellanos lights up the Diamondbacks, going 4-5 and hitting a walk off two-run single. Going into the bottom of the ninth, the Reds were down three, looking like falling back to .500 again. Phil Ervin led off the inning with a single, but almost all hope was quashed after a Tucker Barnhart double play. With the Diamondbacks’ win expectancy at 99 percent, Kyle Farmer calmly singled to extend the inning. Nick Senzel came on to replace Farmer at first while Aristides Aquino pinch hit for Pedro Strop at the plate. Aquino also singled, his first hit of 2020, before Shogo Akiyama and Joey Votto added singles of their own. With two in and the tying run 90 feet away, the Dbacks walked Suarez to face Castellanos. The righty wasted no time, poking the first pitch through the right side hole and sending the Reds streaking from the dugout.

The Guy: Here’s another guy that everyone should remember pretty easily: Magglio Ordonez. Growing up, Ordonez was my favorite non-Red, for both his name (Magglio is an incredible moniker) and his hair. On the field, Ordonez was an All-Star without being a superstar, making six All Star teams but only accumulating 38.8 WAR. He had his best season seemingly out of nowhere, hitting .363 with 54 doubles and a 1.029 OPS in 2007 at 33 years old. He was worth 7.3 WAR that season, more than his previous three season totals combined. After retiring, Ordonez was elected mayor of Sotillo, Venezuela, serving from 2013 to 2017. 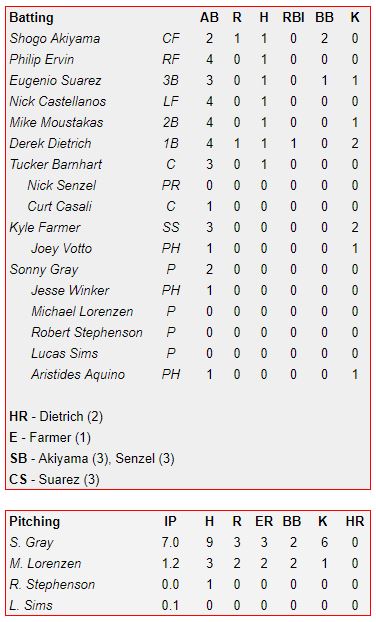 The Game (5-2 loss): David Bell gives Joey Votto the day off as the Reds go for the series sweep. Even though Derek Dietrich, Votto’s sub, launches his second home run of the season, the solo shot isn’t enough to power the Reds offense. Sonny Gray pitches well, giving up three runs across seven innings, but Michael Lorenzen melts down in his second inning of work, frittering away the Reds shot at winning this game. Kyle Farmer’s dreadful start to the season continues, but Freddy Galvis isn’t due back for another few days and the Reds don’t really have any other options in the minors.

The Guy: While a dominant pitcher for both the Dodgers and the Pirates in the 70s and 80s, Rick Rhoden is perhaps most interesting for what he did after his major league career. During his playing days, Rhoden became an avid golfer, good enough to be a scratch player. But once he retired, Rhoden decided to turn pro again, this time on the Celebrity Players Tour. He won the American Century Championship eight times, becoming celebrity golf’s all-time winner and money leader in 2016. Rhoden even qualified for the US Senior Open once, finishing 41st. After that tournament, Rhoden said, “I never thought about professional golf [most of my life]. I stumbled into that celebrity tour when it was starting up right when I got out of baseball. I had never played in a golf tournament before those.” 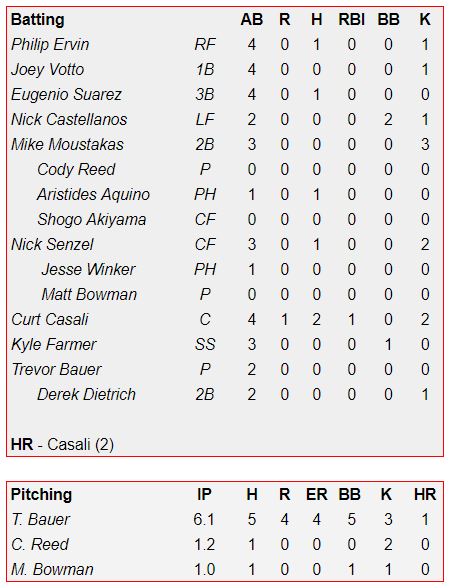 The Game (4-1 loss): It’s a Reds game! A Reds game! A loss, but a real Reds game! Curt Casali provides the only offense for the Reds with his second solo home run of the week, but the rest of the team sputters. Mike Moustakas strikes out thrice for a sombrero, and Nick Senzel manages a single but strikes out his other two trips to the plate. Both are lifted for pinch hitters in the game’s final stretch. Trevor Bauer doesn’t pitch poorly in this game, but Ozzie Albies and Freddie Freeman both get a pair of hits off of him and Tyler Flowers adds a home run of his own.

The Guy(s): Let’s all remember some Reds! Because we all should know these guys, check out this lineup: Mike Cameron 8, Barry Larkin 6, Sean Casey 3, Greg Vaughn 7, Jeffrey Hammonds 9, Mark Lewis 5, Brian Johnson 2, Pokey Reese 4, and Brett Tomko on the mound. Hal Morris, Dmitri Young, and Aaron Boone all came off the bench in this one as well. Because Brian Johnson took home player of the game honors and because I don’t actually recognize his name, let’s dive a little deeper.

Johnson only played one year with the Reds (that explains the lack of memory) and didn’t play particularly well, recording a -0.2 WAR. In fact, his entire major league career was kind of forgettable, save that one time he hit a 12th inning walk off homer that pushed the Giants into a tie with the Dodgers atop the NL West. But his college days, those are fun. Johnson was recruited by Stanford to play football, quarterbacking the team all three years he was there. And even though he also played for the Cardinal baseball team, making appearances at seven different positions, none of them were at catcher! When the Yankees drafted Johnson in 1989, he hadn’t played catcher since high school. Even though Johnson the catcher didn’t become a star, it’s insane to think about how much raw athleticism it takes to make the majors and string together an eight-year career after taking a three year break from arguably the hardest position on the diamond. 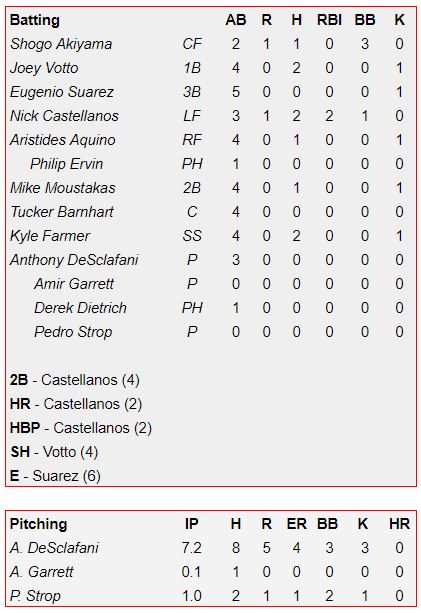 The Game (6-2 loss): After a promising start to the week, the Redlegs have now dropped three straight. The pitching has joined the scuffling offensive in the “Having a Tough Go of It” department, but on the bright side, Nick Castellanos had another good day. After going 7-14 in four games since his day off, the Reds cleanup hitter has officially raised his OPS over .800. Kyle Farmer also netted a couple of hits this game, his second and third of the season, which is not a great sentence to write nearly 30 games in. After the game, Freddy Galvis was activated from the IL, and Aristides Aquino was optioned back to Louisville.

The Guy: Gary Gaetti, who doubled and homered in the real version of this game, is a treasure trove of fun facts. For one, he homered in his first major league at-bat AND in his first two postseason at-bats. Gaetti also played a role in the Twins turning two triple plays in the same game, the only team to ever do so. And Gaetti lasted 20 years in the majors, which is mostly notable because Gary Gaetti was the last player to wear an earflapless batting helmet in MLB. The helmets were banned in 1983, but Gaetti fell under the grandfather clause and managed to wear his all the way into the next millenium. 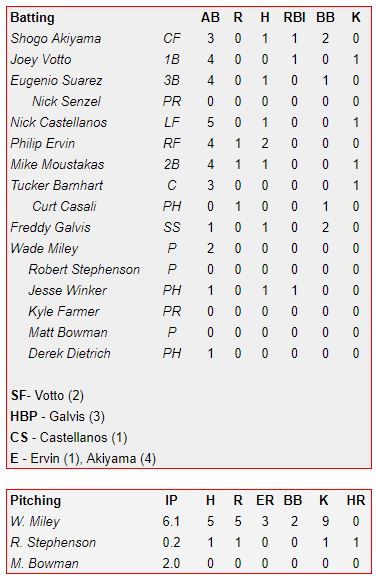 The Game (6-3 loss): Andddd four losses in a row. Wade Miley threw six shutout innings only to meltdown in the seventh, allowing the Braves to score six runs. The Reds grabbed two back in the bottom of the frame and another in the ninth, but it was too little, too late. Freddy Galvis went 1-1 at the plate in his return, walking twice and wearing another pitch as well. Philip Ervin also bounced back after a mini slump, adding two hits and scoring a run. Thirty games in, the Central has started to loosen, with the Cubs and the Pirates fighting atop the standings while the Reds, Brewers, and Cardinals slip away.

The Guy: Two stories about Bill Skowron, nicknamed Moose, to cap off this week’s post:

On the backs of strong weeks, Curt Casali and Nick Castellanos rocket up the batting leaderboard, but still sit well behind Shogo Akiyama. On the pitching side of things, Wade Miley’s peripherals make him the ace of the staff, but his on field results have been less stellar.