Pedro Strop pitched out of a big eighth-inning jam to help the Cincinnati Reds (13-15) preserve a 4-3 win over the Atlanta Braves (16-15) at Great American Ball Park.

Strop entered the game in the eighth with his team up by two runs. After striking out Ronald Acuna to lead off the inning, the next three Braves batters reached him for singles, closing the lead to 4-3, and leaving runners on first and third with only one out. But in perhaps the biggest play of the game, Strop induced Johan Camargo to ground into an inning-ending double play to preserve the one-run lead.

Atlanta got the lead early with solo home runs by Freddie Freeman and Camargo against Wade Miley. However, the Reds took advantage of a huge Braves miscue in the bottom of the fifth to take a lead they ultimately would never relinquish.

With one out, Freddy Galvis singled and advanced to second on a passed ball by catcher Tyler Flowers. (The inning would get worse for him.) After Josh VanMeter struck out, Flowers misplayed a ball hit by Jesse Winker, allowing Galvis to advance to third and Winker to reach safely at first. Shogo Akiyama then singled (his third of four hits) to drive in Galvis. Eugenio Suarez doubled to score both Winker and Akiyama, giving the Reds a 3-2 lead. Because Flowers’ misplay on Winker’s ball would have ended the inning had the play resulted in an out instead of an error, all three Reds runs that inning were unearned.

The sim Reds scored their fourth run, which turned out to be the margin of victory, in the sixth when Mike Moustakas was hit by a pitch. (Moustakas suffered a minor injury on the play, and was removed from the game with Kyle Farmer coming on to pinch-run.) With two outs, Galvis hit a double that scored Farmer from first.

After Strop’s eighth-inning heroics, Raisel Iglesias held the Braves scoreless in the ninth to pick up his sixth save. It was the Reds third win in four games on the homestand, and all four games have been decided by one run.

NOTE: Righthander Mike Soroka was originally supposed to have started the game for Atlanta, but our contact at Strat-O-Matic let us know this morning that Soroka had been placed on the injured list, and Kyle Wright, also a righthander, got the start instead.

The Cubs’ red-hot streak was halted at least for one day by the Pittsburgh Pirates, who defeated the Cubs 4-1 despite having pitcher Chris Archer injured in the first inning and unable to continue. The Cincinnati win pulled them five and a half games behind the leaders. 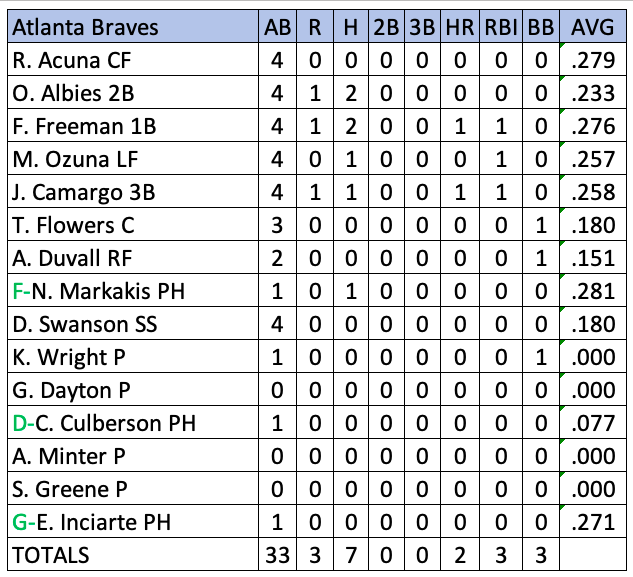 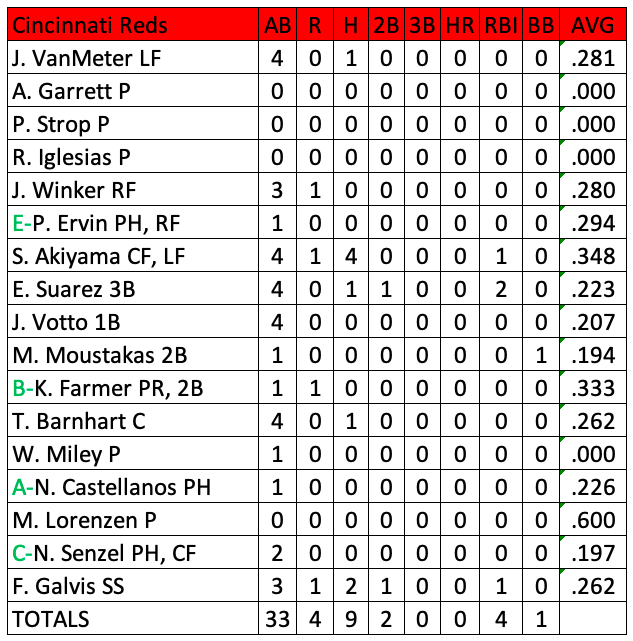 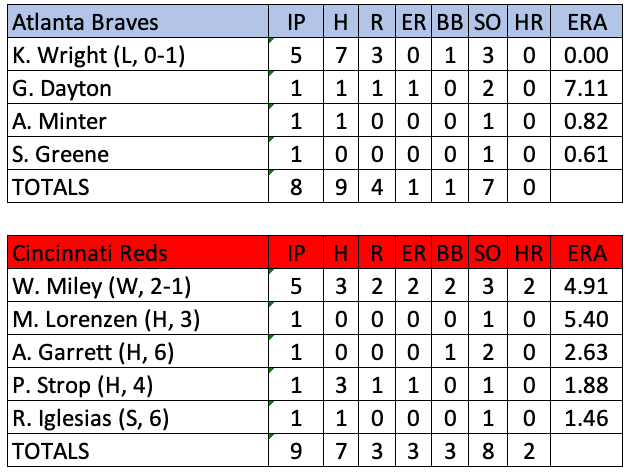 The 2020 schedule as currently constituted has the Reds continuing their homestand Monday by hosting the Atlanta Braves in the second of a three-game series. Luis Castillo will pitch for the sim Reds, while lefthander Max Fried will pitch for the visitors.

Gonzo Reds gets first priority on the lineup for Tuesday since he was a winning manager today. Have fun with this! If you have any questions, please post them in the comment string below. Here are the “managerial records” of our Redleg Nation participants to date:

If you missed our article this morning about Trevor Bauer and getting baseball back in 2020, you really should check it out. What Bauer and his agent get into is a very intriguing discussion about how that it may make a lot more money for owners if they actually play fewer games in a “regular season” this year – as long as they can still play enough games to have a “qualifying season” and still get to the playoffs.

Reds pitcher Trevor Bauer: I’m very convinced there will be baseball in 2020

Over at ESPN dot com, Jeff Passan discusses a whole variety of topics today. Many of them revolve around the 2020 season, which believes is definitely coming – but the details around it are still very much up in the air. It’s a long read, but Passan has some very well thought out points within the article that you really should check out. Later this week we may expand on a few points he makes in longer, more thought out pieces – but it’s worth your time to check out right now.

It seems that MLB Network is going to be all-Reds, all-Tuesday. Or, well most of Tuesday. Beginning at 9am ET they will broadcast four straight Reds-centric programs. The first up is Nasty Boys: The 1990 Cincinnati Reds. That will be followed up with the San Diego Padres vs. Cincinnati Reds from June 24th, 2000 at 10am ET. Next would be 12:00pm ET as they will show Tom Browning’s perfect game from September 16th, 1988. And then at 2pm ET they will show Homer Bailey’s no-hitter against the Giants from July 2nd, 2013.