Tucker Barnhart’s sixth-inning sacrifice fly gave his team the lead, completing a comeback from an early 2-0 deficit and leading the Cincinnati Reds (12-14) to a 3-2 win over the Arizona Diamondbacks (13-14) at Great American Ball Park.

Arizona took the early 2-0 lead off Trevor Bauer on a two-run homer by Jake Lamb in the top of the second inning. Bauer and the bullpen shut down the D-backs offense from then on, however, allowing the sim Reds to come back.

That comeback commenced in the bottom of the third. A Shogo Akiyama home run drew the Reds within 2-1, followed by a Jesse Winker single, Eugenio Suarez double and Mike Moustakas sacrifice fly to tie it.

In the bottom of the sixth, Freddy Galvis led off with a walk, and Josh VanMeter reached on a two-base error by third baseman Eduardo Escobar which sent Galvis to third. Barnhart then scored Galvis with what turned out to be the deciding run.

Bauer went six innings to become the first sim Reds pitcher to four wins. Bullpenners Amir Garrett, Pedro Strop and Raisel Iglesias then continued what has largely been lights-out work by that trio in shutting down the visitors over the final three innings.

The Cardinals, Brewers and Pirates all lost today, allowing the Reds to gain on all three. The first-place Cubs continued their juggernaut, though, by defeating the Philadelphia Phillies. 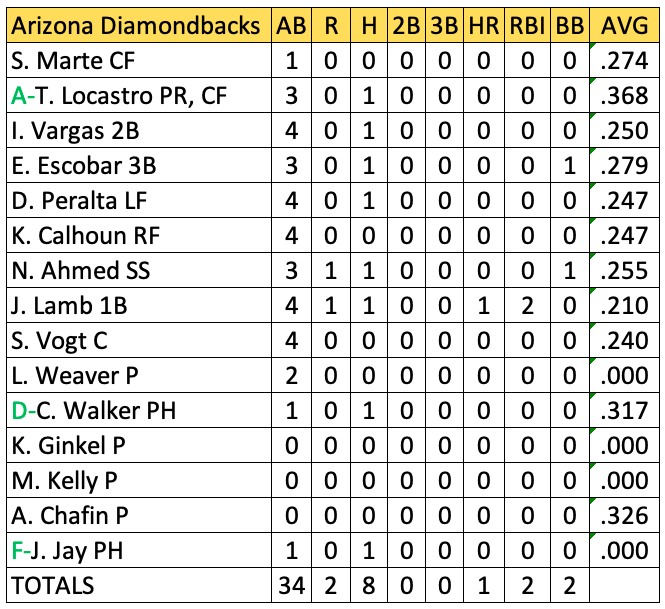 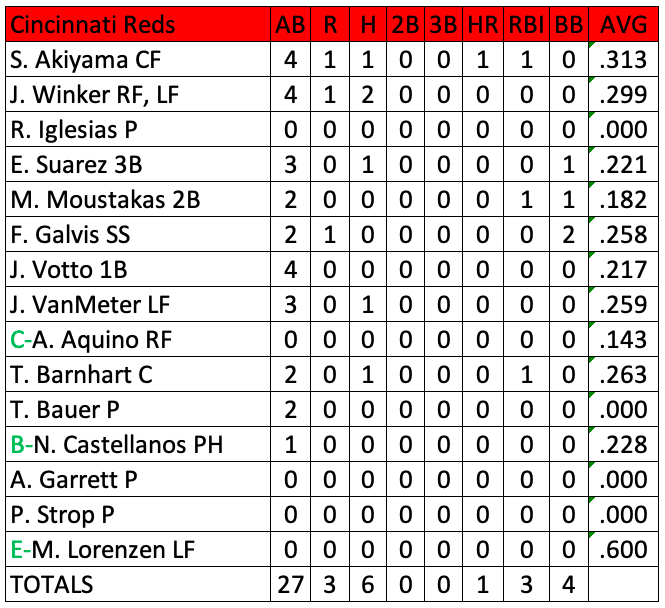 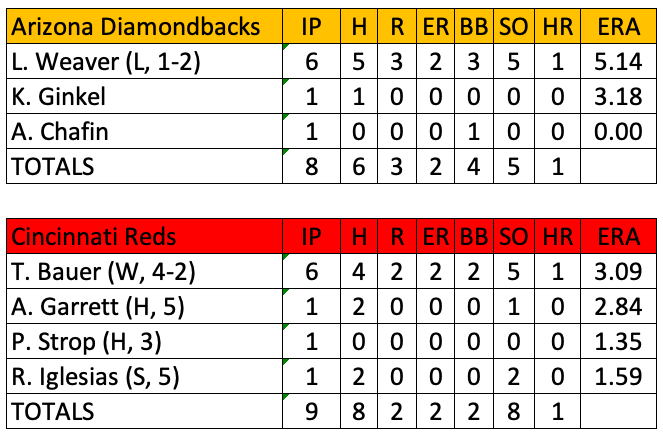 The 2020 schedule as currently constituted has the Reds hosting Arizona again Sunday in the final game of the three-game series at Great American Ball Park. Anthony DeSclafani will pitch for Simcinnati as the Reds go for their first three-game sweep of the season, and righthander Zac Gallen toes the rubber for the visitors.

RedsEuphoria will have priority for Sunday since he submitted a winning lineup for Saturday. Have fun with this! If you have any questions, please post them in the comment string below. Here are the “managerial records” of our Redleg Nation participants to date: