Phillip Ervin’s 13th-inning walk-off triple scored Eugenio Suarez and triggered pandemonium on the field and in the Great American Ball Park sim seats, as the Cincinnati Reds (11-14) downed the Arizona Diamondbacks (13-13) by a 4-3 score.

Suarez walked against Diamondbacks righty Archie Bradley in the bottom of the 13th, and Ervin followed with his second extra-base, run-scoring hit of the game to end the four-hour, four-minute simulated marathon. Ervin’s earlier hit was nearly as big. Trailing in the bottom of the ninth inning, 3-1, Suarez hit a solo homer, his team-leading eighth of the sim season, against Arizona righty (and former Brewer) Junior Guerra, to pull the sim Reds within 3-2. Then, Ervin sent one over the fence against Guerra to tie the game.

Some unique batting order strategy by today’s Redleg Nation winning manager Gonzo Reds paid off in the bottom of the second. With two outs, Aristides Aquino walked and Curt Casali followed with a single. The number eight position in the batting order was up, and Gonzo Reds inserted starting pitcher Sonny Gray in that spot, instead of the typical ninth for a pitcher. But Gray showed why that was a good move with a single off Arizona lefty Alex Young to score Aquino with the game’s first run.

Gray was absolutely dominant on the mound, pitching the first seven innings while allowing only one hit, two walks and no runs. But the bullpen let him down.

Michael Lorenzen came on in the top of the eighth, and got into trouble of his own doing for the second straight outing. With one out, the Diamondbacks loaded the bases on two singles and a walk. Lorenzen then errored a ball hit by David Peralta, allowing the tying run to score. A wild pitch then allowed run number two to cross, and a Christian Walker sacrifice fly plated the third run of the inning.

But thanks largely to Ervin’s late-inning clutch hitting, the Reds were able to overcome the poor outing by Lorenzen, along with:

The Cubs and Brewers both won their games today, and the Reds kept pace with them. Milwaukee’s win was an eye-opening 22-5 win over Colorado at Coors Field. The first eight Brewers batters in the first inning reached, as the visitors scored seven times. 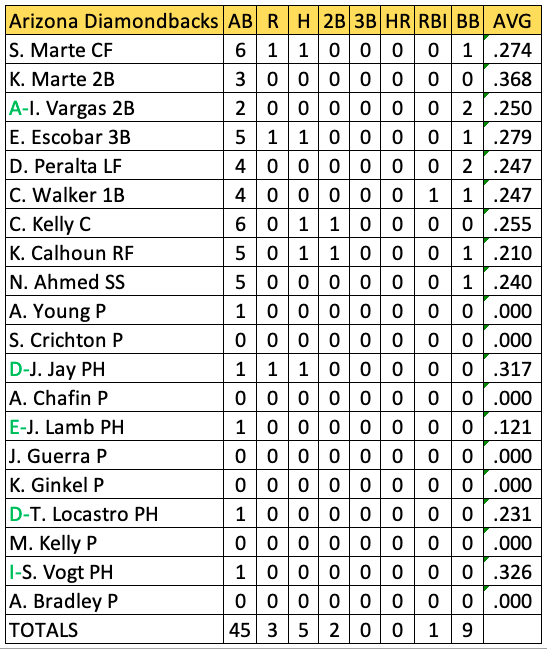 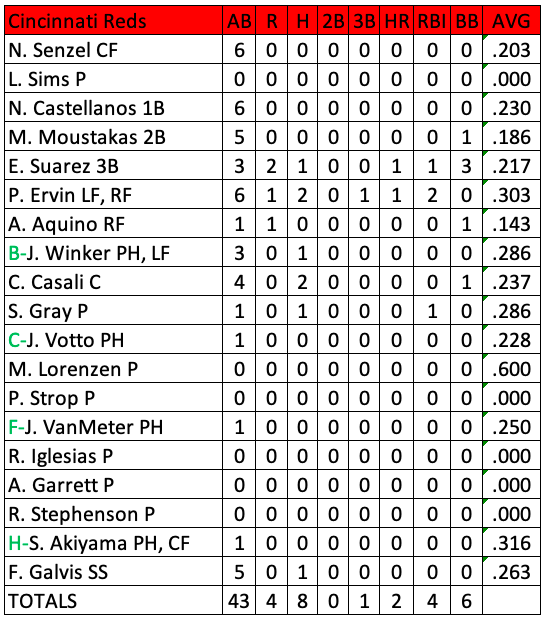 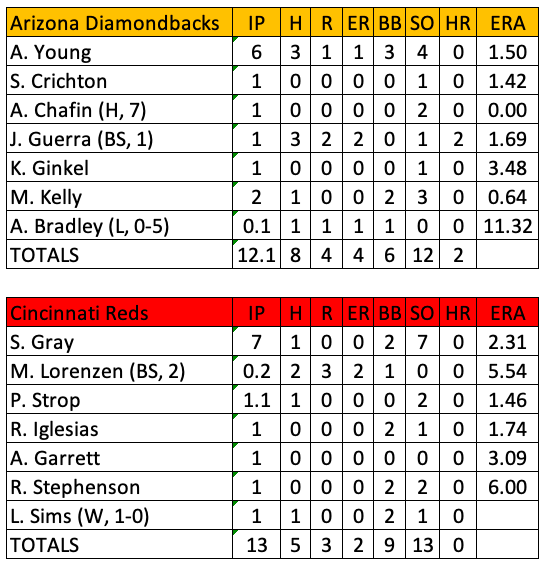 The 2020 schedule as currently constituted has the Reds hosting Arizona again Saturday in the middle game of the three game series at Great American Ball Park. Trevor Bauer will pitch for Simcinnati, and righthander Luke Weaver toes the rubber for the visitors.

Gonzo Reds will have priority for Saturday since he submitted a winning lineup for Friday. Have fun with this! If you have any questions, please post them in the comment string below. Here are the “managerial records” of our Redleg Nation participants to date:

Getting Ready for the Draft

Over at RedsMinorLeagues.com, Doug Gray began looking at each of the top 30 prospects in the 2020 Major League Baseball Draft. Today he looked at potential top pick Austin Martin – not to be confused with Astin Martin, which is what Youtube believes you want to see when you search for Austin Martin. Before the pandemic began and shut down college baseball he was pounding the ball, with an OPS of 1.168 that included five time as many walks as strikeouts.

Over in Taiwan they are playing regular season baseball. And with the now-not-so-surprising popularity of their broadcasts given that it’s about the only sport happening on the planet, you can now watch the games in English. Unfortunately the games are played on the other side of the world, so you’re either going to need to be a morning person or you are just going to need to not sleep to watch them. You can catch the games live on twitter via Eleven Sports Taiwan. You can also browse their feed for the replays of the games, and since you don’t know the outcomes, it’s like watching it for the first time.