Matt Wieters’ two-run home run with two out in the bottom of the 10th inning spoiled a dramatic comeback by the Cincinnati Reds (10-14) and propelled the St. Louis Cardinals (14-11) to a 5-3 win.

Down to their last out in the top of the ninth inning and trailing by one, the sim Reds’ Mike Moustakas — pinch-hitting for Phillip Ervin — stunned the home crowd at Busch Stadium by hitting a solo homer to tie the game. Nick Castellanos followed with a double to put the go-ahead run in scoring position, but Eugenio Suarez struck out to end the threat.

In the bottom of the ninth, Michael Lorenzen escaped a big problem that was of his own doing. With one out, Tommy Edman hit a dribbler along the line that Lorenzen fielded and then threw away down the right-field line. The play was scored an infield hit and a two-base error. With the winning run at third and the Reds infield drawn in, Tyler O’Neill hit a grounder to shortstop Freddy Galvis, who threw home in time for Curt Casali to put the tag on Edman and prevent the winning run from scoring.

However, all of the ninth-inning Cincinnati heroics went for naught. After Lorenzen retired the first two batters in the bottom of the 10th, Dexter Fowler singled and stole second, followed by Wieters’ game-winning shot.

Luis Castillo was shaky, allowing three runs in the first two innings, but stabilized thereafter, as did the Reds bullpen until the 10th inning.

The Reds have still not won the rubber game of a three-game series after 24 games and numerous attempts. The only series they have won this year was taking three of four from the Phillies in early April. For the year, Cincinnati is now 2-4 in six games against St. Louis.

With Chicago, St. Louis and Milwaukee all winning, the sim Reds dropped into fourth place, six full games behind the Cubs. 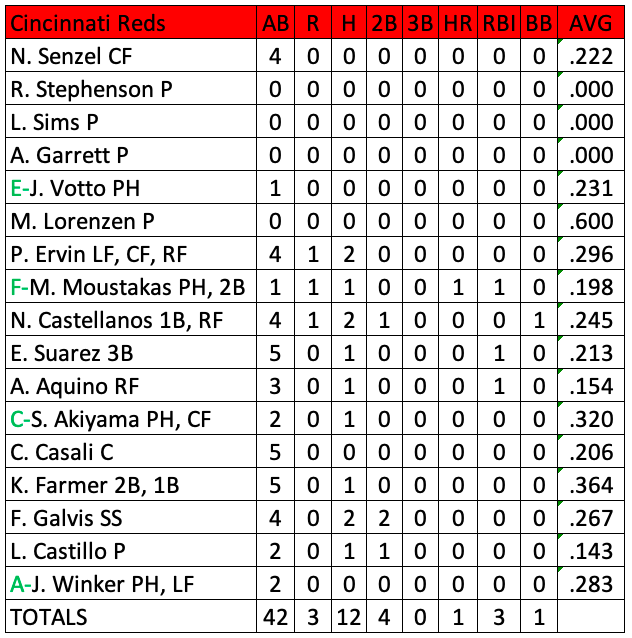 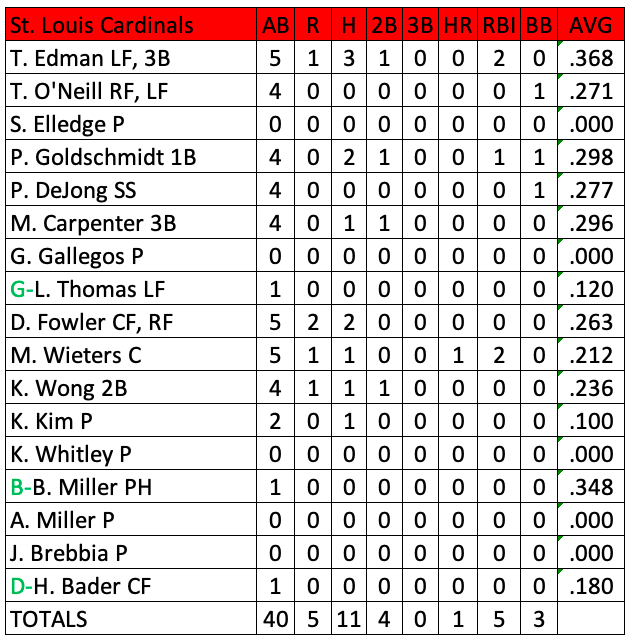 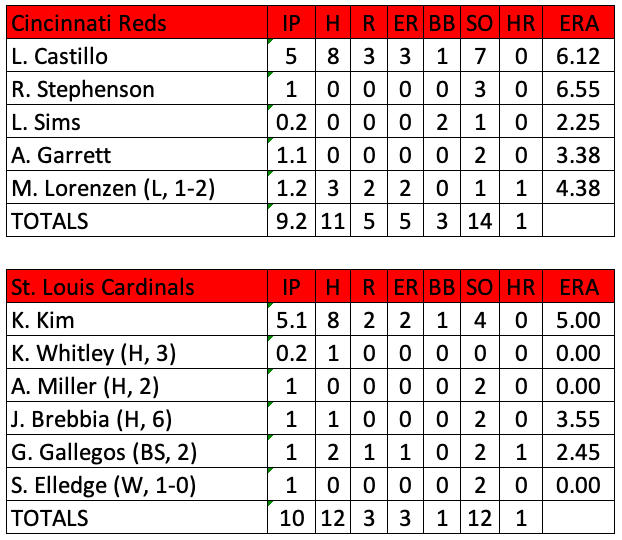 The 2020 schedule as currently constituted has the Reds off Thursday, then returning home to open a three-game series against the Arizona Diamondbacks on Friday. Sonny Gray will pitch for Cincinnati, and lefthander Alex Young will throw for Arizona.

Redsfan4life will have priority for Wednesday since he submitted a winning lineup for Tuesday. Have fun with this! If you have any questions, please post them in the comment string below. Here are the “managerial records” of our Redleg Nation participants to date:

The Red Sox were also stealing signs, but barely get punished

The Boston Red Sox were found by Major League Baseball to be using video to steal signs and relay that information to hitters. Much like the Houston Astros were. And yet they were punished less severe than the Astros were – who weren’t punished nearly enough for what they did. Ken Rosenthal of The Athletic reports that the Red Sox will lose a 2020 2nd round draft pick, manager Alex Cora is banned through the 2020 playoffs (but only for his conduct with the Astros, somehow. He is no longer the manager of the Red Sox, or employed by any team in Major League Baseball.), and their video replay person is banned for both the 2020 and 2021 seasons from doing the video replay job.

*Ban of replay operator J.T. Watkins through 2020 playoffs and from doing same job in ‘21.

*Ban of Alex Cora through ‘20 playoffs, but only for conduct with #Astros.

2020 MLB Draft Rankings have been updated

Both MLB Pipeline and Baseball America have updated their 2020 Draft Rankings in the last week. We still aren’t entirely sure when the draft will be held this year, other than a vague “July” date. And we aren’t even sure how many rounds it will have – but there will be at least five of them (there are usually 40). But we do have updated rankings of the top 150 (MLB Pipeline) and top 400 (Baseball America) that are now available.