Wade Miley’s best start of the young sim season led the Cincinnati Reds (10-13) to their second shutout pitching performance in the past three games, this time scoring a 4-0 blanking of the St. Louis Cardinals (13-11) in the middle game of a three-game series at Busch Stadium.

On Sunday, the sim Reds blanked the Yankees, 2-0, behind Trevor Bauer’s masterful outing. Today, Miley pitched one out into the seventh before Pedro Strop, Michael Lorenzen and Lucas Sims collaborated with him on the shutout pitching performance. In only two of the nine innings did the Cardinals have a runner reach as far as second base.

On offense, the Reds struck in the top of the second inning on a leadoff homer by Eugenio Suarez (his team-leading seventh), immediately followed by a double by Mike Moustakas and a run-scoring single by Freddy Galvis, his first of three hits. However, the opportunity for a bigger inning was missed when Shogo Akiyama grounded out to leave the bases loaded. In the fifth, Jesse Winker drove in two with a single, his second of three hits for the game.

Redleg Nation commenter/manager Redsfan4life earned his second win. He will have the chance to be the envy of his peers by winning his third game in the lineup-crafting role Wednesday. He will have the task of trying to find a way to shake Luis Castillo out of a very uncharacteristic slow start to the season. Perhaps a closed-door heart-to-heart chat is in order … or a special session with pitching coach Derek Johnson … or maybe just a quick trip over to the Budweiser Brew House just outside the stadium before the game. If we are fortunate, he’ll share his strategy with us here at Redleg Nation.

The Reds pulled back within two and a half games of the second-place Cardinals with the win. First-place Chicago won to remain five games ahead of the Reds, tied for third with Milwaukee. 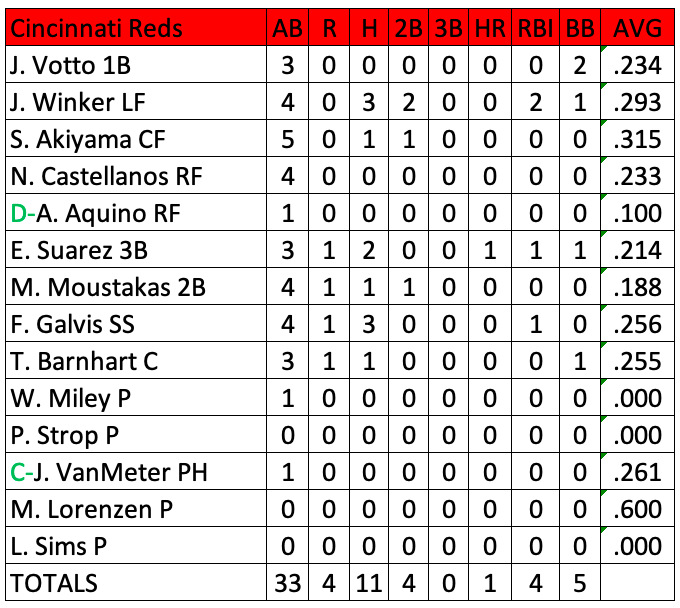 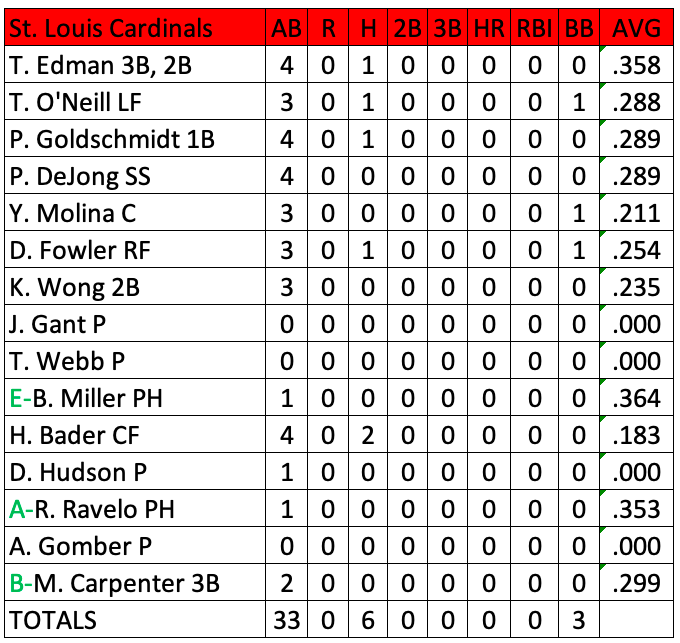 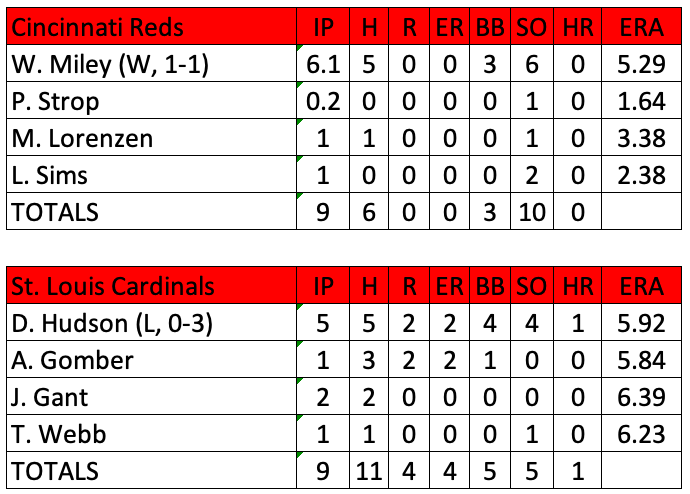 The 2020 schedule as currently constituted has the Reds and Cardinals playing the rubber game of their three-game series at Busch Stadium in St. Louis Wednesday. Luis Castillo pitches for the sim Reds, and lefthander Kwang-hyun Kim pitches for the Cardinals. For the season, St. Louis has a 3-2 advantage over Cincinnati in the five games between the teams to date.

Redsfan4life will have priority for Wednesday since he submitted a winning lineup for Tuesday. Have fun with this! If you have any questions, please post them in the comment string below. Here are the “managerial records” of our Redleg Nation participants to date:

In a fight that seemed to hit the back burner when the COVID-19 pandemic hit us all, the public fighting between Major League Baseball and Minor League Baseball ended. And it seems that Major League Baseball is going to be able to use their ability to survive the storm to get exactly what they wanted in the first place. It’s being reported that Minor League Baseball will agree to reduce the number of affiliated teams from 160 down to 120 beginning in 2021. There are still a lot of unanswered questions that need to be figured out, and it’s going to change how the Cincinnati Reds farm system looks next year in a rather big way.

Minor League Baseball to agree to reducing the number of teams

Sheryl Ring takes a look at the talks between Major League Baseball and the Major League Baseball Players Association over how things could go if and when baseball restarts, and comes to a rather simple conclusion that the players are taking just about all of the risk in these plans, while also being asked to take a pay cut by the owners. A lawyer, Ring argues the legal side of the agreement as proposed, too. It’s an interesting read over at Beyond The Box Score if you are interested in that sort of thing.