Despite an early home run barrage by the St. Louis Cardinals (13-10) against Anthony DeSclafani, the Cincinnati Reds (9-13) hung tight for most of the game. That is, until a five-run Cardinals eighth inning put things away and led to an 11-4 St. Louis victory in the first game of a three-game series at Busch Stadium.

The Reds got off to a quick start in the top of the first on Shogo Akiyama’s single and Eugenio Suarez’s one-out home run, his team-leading sixth of the season. But the Cardinals struck back quickly, with Matt Carpenter’s three-run home run in the bottom of the first, and Brad Miller’s home run the next inning.

Despite the lopsided score, there was a period of a few minutes late in the game that was pivotal in the outcome. Trailing 6-3 entering the top of the eighth, the sim Reds rallied. Joey Votto led off with a walk, Nick Castellanos singled one out later, and Nick Senzel followed with a pinch-hit single that scored Votto. An error by Miller resulted in Castellanos advancing to third and Senzel to second with only one out and the Reds down by just two. But Cardinals righthander John Brebbia was brought on, and retired pinch-hitter Phillip Ervin and Tucker Barnhart on a pop-up and strikeout, respectively, to end the half-inning.

In the bottom of the eighth, St. Louis unloaded on Robert Stephenson and Cody Reed. With two out and one Cardinal runner on, the next six St. Louis batters reached base on four singles and a walk, with errors by Senzel at second base and Suarez at third mixed in, effectively putting the game away.

The Reds and Cardinals were the only NL Central teams in action Monday, so the Cardinals’ win pulled them within 1.5 of the first-place Cubs, while the Reds fell back into a three-way tie for last. 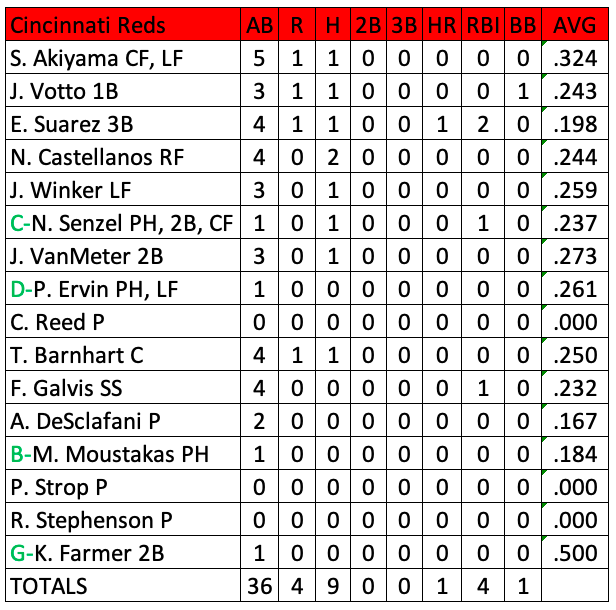 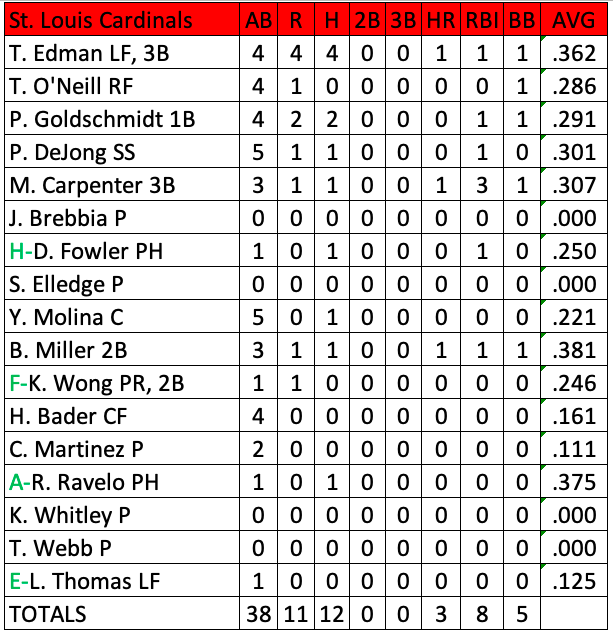 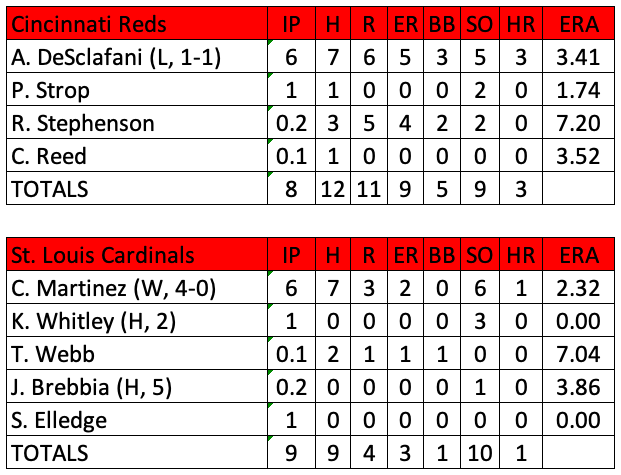 The 2020 schedule as currently constituted has the Reds and Cardinals playing the middle game of their three-game series at Busch Stadium in St. Louis Tuesday. Lefthander Wade Miley pitches for the sim Reds, and righthander Dakota Hudson pitches for the Cardinals.

Taiwan, Korea are playing – Japan and the US are not

Baseball games have begun in Taiwan for their regular season and we took a look at some real life, actual games that included a 3-homer game featuring a walk-off, and the season’s first bench clearing incident. Korea announced that they will begin their second round of spring training and begin their season on May 5th. But not all is well in the Asian baseball world as Japan delayed and modified their schedule once again.

Over at RedsMinorLeagues.com Doug Gray handed out the award for best season of the decade between 2000-2009 on the Cincinnati Reds farm system, giving the nod to Adam Dunn and his 2001 season. In the minors that year he OPS’d over 1.100 while hitting 35 home runs before being called up in late July, where he then hit another 19 home runs in the Major Leagues.

Reds commit to paying operations staff through May

The Cincinnati Reds are now one of seven teams that have committed to paying their baseball operations staff through the end of May. That’s good news for those who will still be getting checks because yesterday Rob Manfred announced the suspension of the Uniform Employee Contracts, which would allow teams to furlough or reduce salaries of employees as of May 1st.

The Reds commit to paying employees through May 31st