Trevor Bauer was brilliant in perhaps the most dominant pitching performance in the young sim season for the Cincinnati Reds (9-12), as they recorded a 2-0 shutout of the New York Yankees (13-9) in the Bronx. The Simcinnati Reds avoided a three-game sweep by New York with the win.

Bauer went seven innings, striking out 11 while allowing only five hits and two walks. Amir Garrett and Raisel Iglesias finished the shutout with stellar relief work over the final two innings. It was a day for strikeouts, as Yankees starter J.A. Happ whiffed 14 Reds in his seven innings.

Strat-O-Matic quoted Bauer as saying, “The important thing is that we won. If I get 20 and we lose, what good does it do our team? But, on the other hand, since we won it feels great!” In a more private moment, Bauer dedicated his dazzling performance to his Redleg Nation manager of the day, James Owens, who announced via the Redleg Nation comments Saturday that he had become the father of a baby boy that very day. Bauer said he was motivated by his hopes that his manager’s son might be named Trevor Bauer Owens, but conceded that there may be other factors being considered for the baby boy’s name.

The sim Reds offense continued to be spotty at best, but two runs were enough on this day. Solo home runs by Eugenio Suarez in the fourth and Nick Castellanos in the sixth were all Cincinnati was able to muster against Happ. Michael Lorenzen, who got the start in center field, played the entire game there and went 2-for-3 at the plate.

There was good news for the Reds in the divisional race, as well. First-place Chicago, Milwaukee and Pittsburgh all lost their games, so Cincinnati leapfrogged the latter two teams and now sits third in the NL Central, behind the Cubs and St. Louis. The three-game series at Busch Stadium which starts Monday, therefore, takes on some added significance. A sweep of that series would move the Reds ahead of St. Louis. 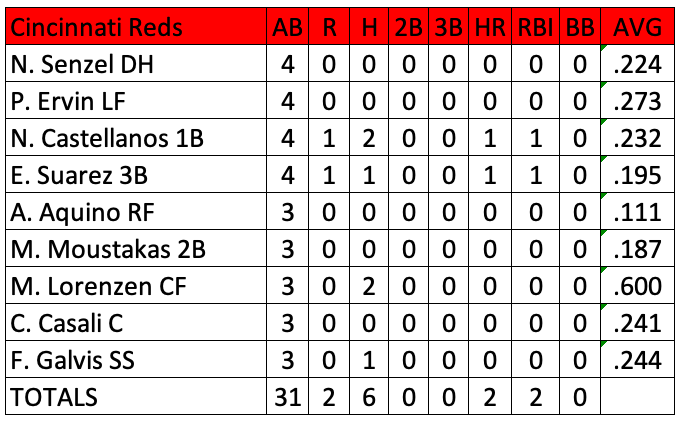 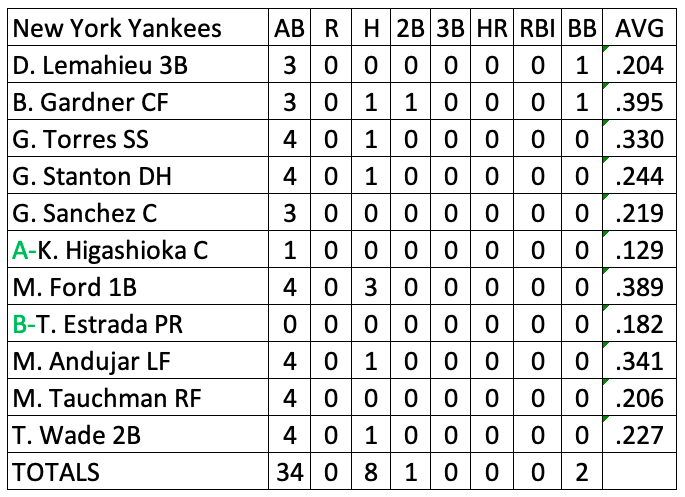 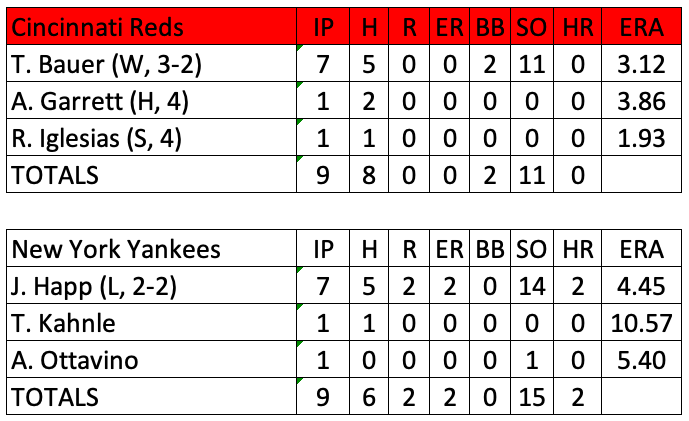 The 2020 schedule as currently constituted has moving on to St. Louis Monday for the first of a three-game series against the Cardinals. St. Louis took two of three from the sim Reds in the season-opening sim series. Anthony DeSclafani pitches for Cincinnati, and righthander Carlos Martinez will go for St. Louis.

Because James Owens was a winning manager today, his lineup will be chosen for Monday’s game if he opts to submit one. If not, the Monday lineup will be determined from among other submissions according to the steps outlined immediately above.

MLB could furlough, reduce salaries of employees in May

Major League Baseball Commissioner Rob Manfred will suspend Uniform Employee Contracts on May 1st according to Ken Rosenthal of The Athletic. Essentially, that’s anyone who isn’t a player – including managers, coaches, scouts, minor league managers and coaches, as well as many – but not all – front office employees.

Effective May 1, Commissioner Rob Manfred will suspend Uniform Employee Contracts, enabling teams to furlough employees or reduce their pay, according to major-league sources. Teams would not be required to take such measures, but baseball’s decision would provide the possibility of relief for clubs facing the most significant financial duress as the 2020 season remains on hold.

The Best Relief Season on the Farm of the last decade

Rounding out the Season of the Decade on the Cincinnati Reds farm system, Doug Gray handed out the award for best relief season to Donnie Joseph’s 2012 campaign. He would be traded late that season in the deal for Jonathan Broxton before going on to spend a few years in the big leagues with the Royals. That season saw him post a 1.72 ERA between Double-A and Triple-A.

Photo of Trevor Bauer by Erik Drost. Photo has been edited. License can be found here.