Luis Castillo was battered early and often by the New York Yankees (12-8) offense, as the Cincinnati Reds (8-11) fell 10-1 in the opener of a three-game weekend series at Yankee Stadium.

The Simcinnati Reds actually drew first blood in this one, as Aristides Aquino (making his first appearance of the sim season after being recalled from Class AAA) drew a walk from winning pitcher Garrit Cole to lead off the second inning. Aquino then stole second, and was driven in on a base hit by Nick Castellanos.

New York responded immediately in the bottom of the inning, when Gary Sanchez led off with a single, and Mike Ford followed with a two-run big fly to give the home team a lead they would not relinquish.

Trailing 7-1, the Reds had a chance to cut the lead in the top of the sixth when, with two out, Aquino doubled and Mike Moustakas followed with a walk. But Castellanos struck out against Cole, ending what was Cincy’s last chance to get back into the game.

Cole showed why he would make $36 million if a full actual 2020 season was being played. In six innings, he struck out nine and lowered his ERA to 1.95.

The Cubs continued to put distance between themselves and the rest of the NL Central. They defeated the Washington Nationals today, 8-3, to improve to 14-6 overall. Second-place St. Louis is four games back, followed by the Brewers and Pirates at five games back, and the Reds in the cellar at 5.5 games behind the leaders. In the early going, the Cubs are being led by the one-two punch of Javier Baez and Kris Bryant, who have OPS numbers of .906 and .927, respectively. On the mound, lefty Jon Lester is 3-0 with a 1.85 ERA. 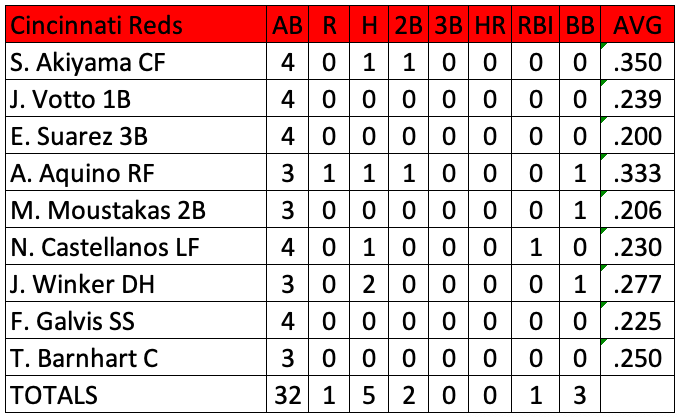 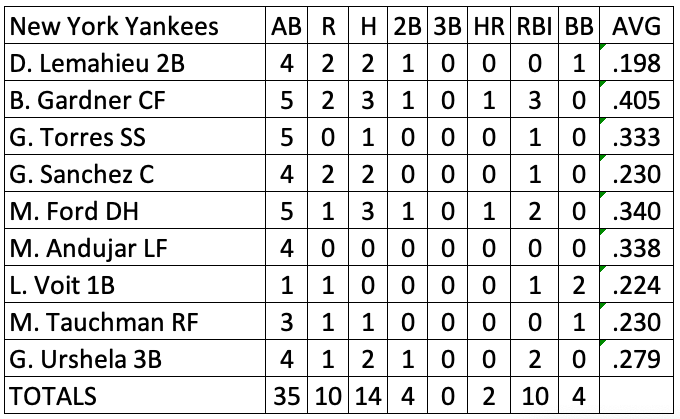 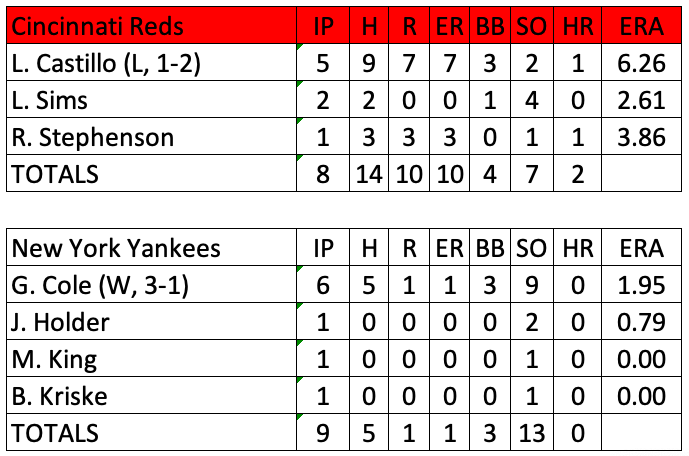 The 2020 schedule as currently constituted has the Reds playing the middle game of the three-game series at Yankee Stadium on Saturday. Sonny Gray gets the chance to exorcise some of the demons that plagued him during his brief stay in the Bronx before a trade to the Reds revitalized his career. Righthander Masahiro Tanaka pitches for New York.

If you are planning to submit a lineup for Friday, remember that because the game is an interleague game in an American League park, the Reds will have the DH in their lineup.