Faced with yet another chance to reach the .500 mark, the Simcinnati Reds again failed to convert the opportunity.

The San Francisco Giants (7-12) came up with a 3-2 win over the Cincinnati Reds (8-10), as the home team lost the rubber game of a three-game series for the fourth straight time in the young season.

Cincinnati struck early against Giants lefthander Drew Smyly, with single runs in innings two and three. RBI hits by Freddy Galvis and Phillip Ervin got the job done. However, Ervin was caught attempting to steal second base after that hit, which proved costly because Kyle Farmer followed immediately with a double.

Reds starter Wade Miley held the Giants down for the first four innings, but thereafter the visitors came back and took the lead they would not relinquish. Darin Ruf struck for a solo home run in the fifth, and Hunter Pence and Donovan Solano delivered RBI hits in the sixth, knocking out Miley.

The Reds had two late chances to at least tie, but they came up short. Shogo Akiyama doubled with two out in the seventh, and advanced to third on a passed ball, but Nick Senzel struck out to end that inning. In the bottom of the ninth, Galvis reached on a two-out hit, but Giants reliever Tony Watson struck out pinch-hitter Michael Lorenzen to end it.

The loss dropped the Reds back into the NL Central cellar by themselves, 4.5 games behind the first-place Cubs. Milwaukee defeated the Phillies to climb back over the Reds into fourth place. 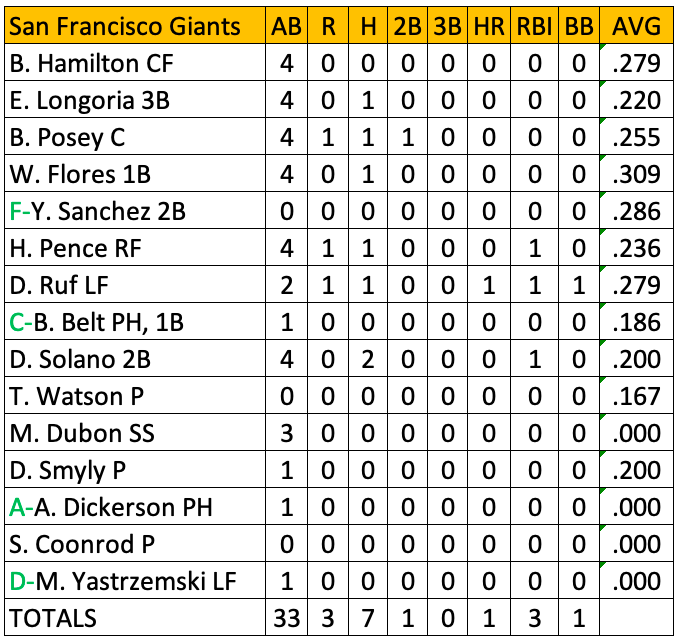 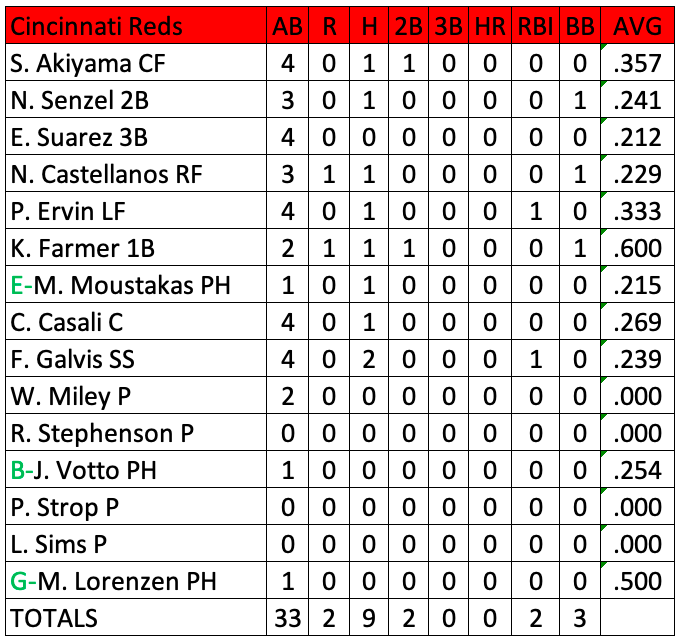 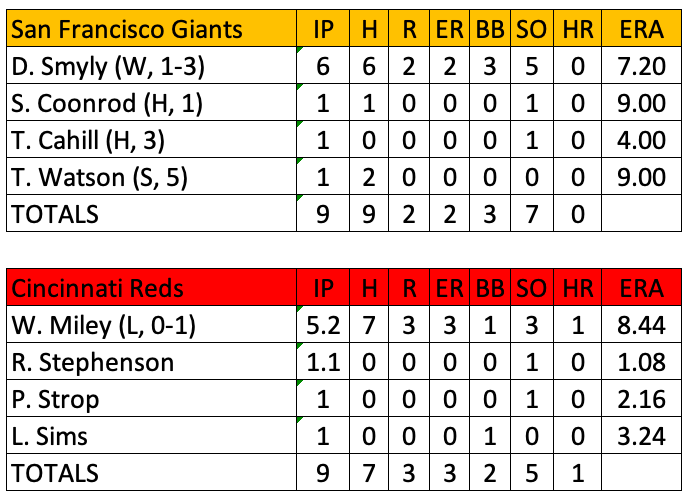 The Reds finished the nine-game homestand with a record of 5-4. The 2020 schedule as currently constituted has the Reds moving on the road for the first game of a three-game series at Yankee Stadium on Friday. Luis Castillo will pitch for the Reds, and righthander Gerrit Cole will pitch for New York.

If you are planning to submit a lineup for Friday, remember that because the game is an interleague game in an American League park, the Reds will have the DH in their lineup.

Updates on getting baseball in 2020

Over at The Athletic Aaron Portzline spoke with several expert in the field of infectious disease about what they would need to see before sporting events could allow spectators. It sounds like it’s going to be quite a while before we do get to that point in this whole situation. Many governors around the country are also saying the same thing – events like sports and concerts with fans in attendance are going to be among the last things that we see as we begin to walk back on some of the restrictions we’ve all be taking.

How the rich teams may get richer from TV money

Craig Edwards looked at the TV revenue around Major League Baseball at Fangraphs earlier today. The exact details of every team’s deal isn’t known, and in the specific case of the Cincinnati Reds very little is known. One thing he dialed in on is how teams that have ownership stakes in their regional sports networks could really come out ahead over the teams that don’t.

For argument’s sake, let’s say there’s $150 million left at the end of the year for NESN; the Red Sox get $120 million of that amount on top of their rights’ fees and they don’t have to include that amount in revenue sharing. For teams like the Red Sox, Yankees, Mets, Mariners, and Orioles, this is a potentially significant amount of money. These revenues and profits are also in line with Sinclair’s statement that they expect $40 million to $50 million from the Cubs and Marquee (an expectation that assumed carriage by Comcast, which they don’t currently have). The Dodgers have the potential to reap money from their ownership share, though carriage issues have likely prevented an extra revenue stream. Even the teams with smaller ownership stakes can still receive some rewards, with the Nationals yearly dividend in the $5 million to $10 million range.

12 teams own zero percent of their regional sports network. The Cincinnati Reds do own part of Fox Sports Ohio – but how much is unknown. It’s mentioned by Edwards that the Nationals yearly dividend is $5-10M. They own 21% of their RSN. This ownership stake many of these teams have been taking over the last decade is a way to have the team benefit from TV contracts without having to claim it’s “baseball revenue”, and thus another way they can claim they are “breaking even” or “not making as much as you think”.

Devin Mesoraco’s 2010 season gets the nod

Over at RedsMinorLeagues.com Doug Gray looked back at the Reds farm system’s offensive season of the last decade. It was Devin Mesoraco’s 2010 season that got the nod over several other big years. Mesoraco hit 26 home runs across three levels that season while playing for Lynchburg, Carolina, and Louisville.