You know how last week I said that quarantine was preventing me from procrastinating? Not so this week! Instead of working on these randomizations at a reasonable time, I played roughly ~20 hours of Fifa 18. (Sorry Doug.) But another week of fictional baseball has passed, and we have some Reds results and guys gone-by to acknowledge.

If you missed the explainer of this little project, you can find it here and last week’s results here. To give the Sparknotes: I will be randomizing every Reds game by picking a historical box score and subbing in the current Reds. As you might guess, these randomizations are not meant to be realistic, unlike Tom Mitsoff’s Strat-o-Matic simulation exercise. I just want people to remember how absurd baseball can be and maybe learn about some guys from years gone by. Also, I really want Joey Votto to steal 30 bases and is that too much to ask? 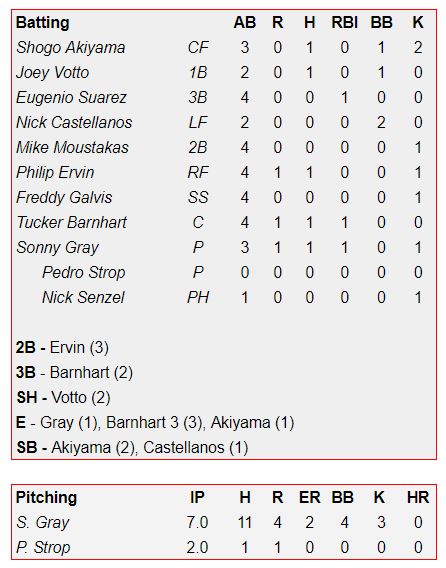 The Game (5-3 loss): For the second time in 12 games, our randomizer has turned up a Boston Americans vs. New York Highlanders game from the early 1900s. And whereas the first one featured a 14-inning Luis Castillo complete game, this one went much, much worse. The Reds commit five errors, three by Tucker Barnhart behind the plate. Barnhart makes up for it by tripling for the second time in as many days, but the rest of the Reds’ bats stay quiet. New starter Philip Ervin adds a double and Sonny Gray helped himself, but that’s it. Tough day, see you tomorrow.

The Guy: Even though Sonny Gray took the loss, we’ll highlight his counterpart as the star of today’s game. Al Orth, nicknamed Smiling Al and the Curveless Wonder, was the original control-over-stuff pitcher. Orth rode his “slow ball” to a 51 WAR career, winning 204 games and pitching more than 3000 innings. Once, Orth threw a pitch so slow that the batsman caught the ball barehanded. The righty lasted 15 years in the bigs and bounced around independent leagues for a couple of years after the Highlanders released him. Yet, the nightcap on Orth’s career was not a retirement ceremony but a five-year stint as an umpire for the National League. If you can’t beat ’em, join ’em. 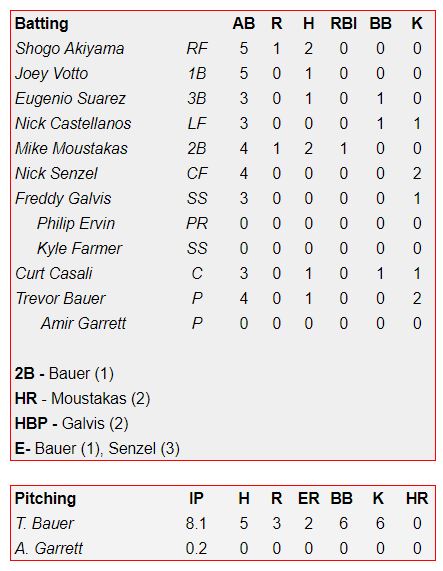 The Game (3-2 loss): One bad inning and another game of non-existent bats wrecks a fantastic start by Trevor Bauer. The Reds righty goes 8.1 innings, but a three-run third propels the Phillies to victory. Bauer’s walks caught up with him in this one, as the first two runs in that third inning both reached base via free pass. Ultimately, Bauer ended with six walks and six strikeouts. As for the offense, Shogo Akiyama netted a pair of singles, Mike Moustakas hit his second tater, and Bauer tried to help himself with a double, but it went for naught. Freddy Galvis was hit by a pitch in the eighth and had to be pulled from the game. It’s the first injury in this supposedly injury-free world, and Alex Blandino was called up to take Galvis’ spot while he’s hurt.

The Guy: While I’m tempted to pick Galvis’ counterpart, old friend Scott Hatteberg, Freddy probably had the worst day at the ballpark. Instead, Tom Gordon, Bauer’s counterpart, is the pick. You probably know a good deal about Tom “Flash” Gordon given he fathered current major leaguer Dee Gordon, and many wonderful profiles have been written on Dee. My favorite fun fact about Flash Gordon though is Stephen King once wrote a novel about him … kind of. “The Girl Who Loved Tom Gordon” is a psychological horror novel (duh) about a girl who gets lost while on a hike and starts hallucinating people, including Tom Gordon. An actual plot point of this book is the girl imitating Tom Gordon’s windup to fling her Walkman at an approaching bear. Flash almost overlapped with Dee in the majors, but was released by the Diamondbacks at the end of the 2009 season before Dee debuted in 2011. 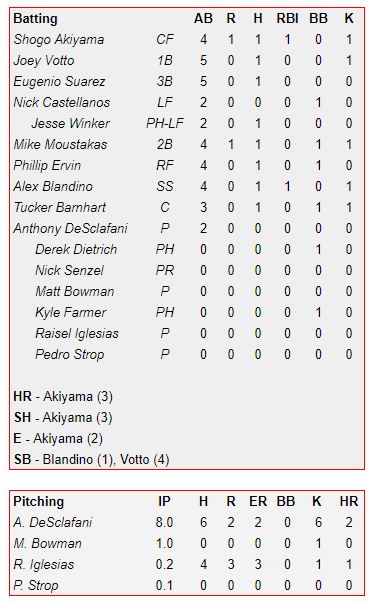 The Game (5-2 loss): The Reds’ good luck to start the season has thoroughly ground to a halt as the team loses their fourth game in a row today. Anthony DeSclafani makes another solid start, limiting the Phillies to just two runs on two solo shots over eight innings, but Raisel Iglesias gives up a three-run dinger in the top of the 10th to seal the Reds’ fate. Shogo Akiyama hits a solo home run of his own to power the Reds’ offense, and Joey Votto steals another base, furthering his team leading total to four. In his season debut, Alex Blandino gets a hit and swipes a base, but otherwise it’s another quiet day for the Reds bats.

The Guy: Lynn McGlothen peaked as a 24-year-old when he was named to the NL All Star team and finished ninth in Cy Young voting with a 2.69 ERA. McGlothen’s youth was truly the prime of his baseball career, as he earned praise from both Carl Yastremski and Reggie Smith as a 20-year-old prospect. Smith compared McGlothen to former St. Louis Cardinals great Bob Gibson, saying “the mound out there belongs to him.” McGlothen might have owned it, but after that age-24 season, he didn’t tend to it that much. Ultimately, McGlothen accumulated just under 15 WAR for six different teams in his 11-year career, finishing with a 3.98 ERA. He died three years after his retirement in a house fire. 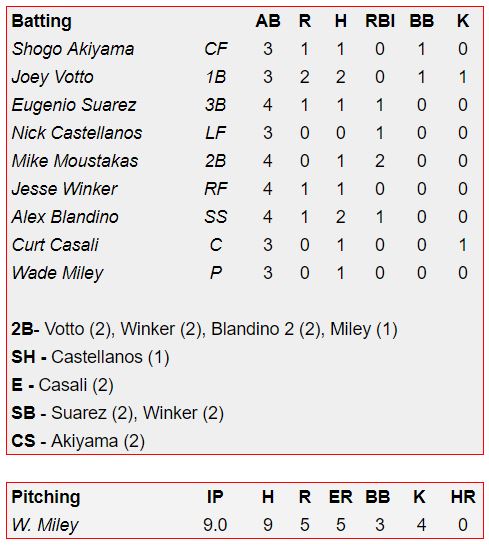 The Game (6-5 win): Wade Miley comes out strong with the Reds SIXTH complete game of the season to break the losing streak and keep pace with the division-leading Cubs. It’s not a pretty complete game, that’s for sure, but it does get the job done. Miley adds a double at the plate, but the real star is the newcomer Alex Blandino, who doubles twice, steals a base, and brings home a run. Joey Votto also turned in a two-hit day, and Mike Moustakas became the first Red to hit double-digit RBIs.

The Guy: Bill Wambsganss might be the most remarkable unremarkable player of all time. For one, he’s the only player to turn an unassisted triple play in the World Series, having done so in the 1920 World Series. A singular event in itself, that story was made all the better nearly 30 years later when pitcher Joe Coleman was asked at a speaking event if anyone had ever turned an unassisted triple play in the World Series. Coleman didn’t know, but First Lady Grace Coolidge did, replying quietly: “Yes, Bill Wambsganss, Cleveland infielder, in the 1920 Series.” Bill also received MVP votes in 1922 (the season this game is from) despite hitting .262 with a .666 OPS. He did lead the league in bunts though. Perhaps my favorite pseudo-fact is that Jesse Armstrong, the writer of Succession and massive baseball fan, likely named the character Tom Wambsgans after Bill Wambsganns. Can’t make a Tomlette without turning a triple play … or something like that. 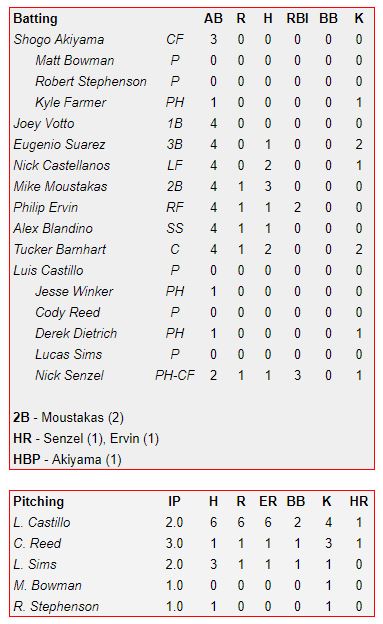 The Game (8-5 loss): Well, after the Reds No. 5 turned in a spectacular complete game, the team’s ace laid a goose. Luis Castillo got rocked for six runs in just two innings, turning the ball over the bullpen and the Reds behind the eight ball. Despite strong relief performances from Cody Reed, Lucas Sims, Matt Bowman, and Robert Stephenson, the Reds couldn’t quite rally enough to get the win. Nick Senzel did launch his first homer of the season after coming in on a double switch, and Mike Moustakas put in a 3-4 day with a double.

The Guy: With any recent game, the names are going to be more familiar and the facts less fun. Such is the case here with current free agent Lucas Duda. In rather obvious fashion, Duda’s nickname is “The Dude.” USC tells me that he was the 97th Trojan baseball player to make the bigs when he made his debut in 2012. Duda has only bunted once in his eight year career, and yep, that’s about it. If you Google Lucas Dude, you will mostly find various fan blogs writing about how they don’t want Lucas Duda on their team. Poor Lucas Duda. 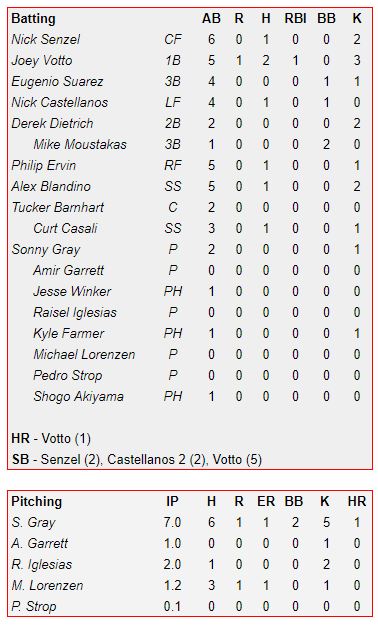 The Game (2-1 loss): Just a truly terrible week for the Redlegs. Sonny Gray turns in another excellent start, but the Reds drop this one in extras as Michael Lorenzen gets knocked around in his second inning of work. In happier bullpen news, both Amir Garrett and Raisel Iglesias pitched clean innings, with Garrett leading the Reds pen in FIP (albeit in limited innings). Joey Votto takes our star of the game honors as the only Red to turn in a multi-hit effort, including his first long ball of the season. Votto also added another steal, which is quickly cementing itself as my favorite statistic of this whole experiment.

The Guy: Unlike Joey Votto, Shawon Dunston was actually prolific on the basepaths, stealing 212 bases over the course of his 18-year career. When the Cubs drafted Dunston first overall in 1982, he became the first ever New York-area high schooler to go that high in the draft. The senior year stats that caught the Cubs’ eye? A .790 batting average with 10 homers and a perfect 37-37 stolen base record. As a shortstop, Dunston was primarily known for his arm. First baseman Mark Grace said that he once misjudged a throw of Dunston’s and that his wrist was “black and blue for weeks” as a result.