The Simcinnati Reds bats got started early. Shogo Akiyama, the unquestioned offensive standout so far for the sim Reds, led off with a double, and then scored an out later on Joey Votto’s double off Jeff Samardzija. In the second inning, Akiyama was again in the middle of things, plating Nick Castellanos on his second double in two innings, and then scoring himself on a Jesse Winker two-base hit to take a 3-2 lead. Later in the game, Akiyama walked twice and on defense, stole a home run from Mike Yastrzemski to end the top of the fourth inning.

Reds pitching could not hold the 3-2 lead after two innings. Trevor Bauer was shaky, and was victimized by an error by shortstop Freddy Galvis which led to two unearned runs in the top of the second inning. On what could have been a double-play grounder, Galvis kicked Evan Longoria’s sizzler into left-center field for a two-base error, and the Giants capitalized.

On the bright side for the Reds, Lucas Sims pitched two innings in relief of Bauer, striking out four and allowing no base runners.

The Reds stand alone in the NL Central division basement, four and a half games behind the first-place Cubs. The Cubs extended their divisional lead with a 2-1 win over the Baltimore Orioles today. 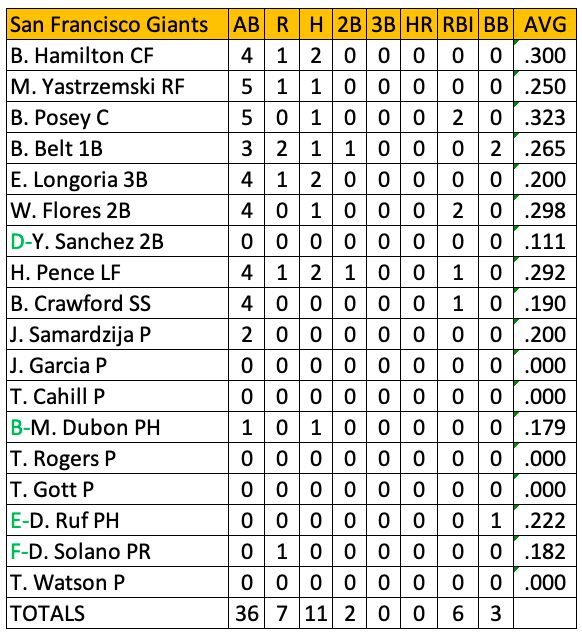 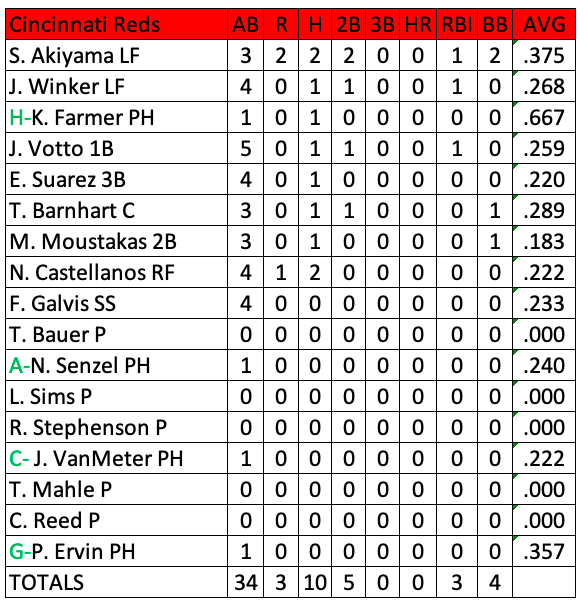 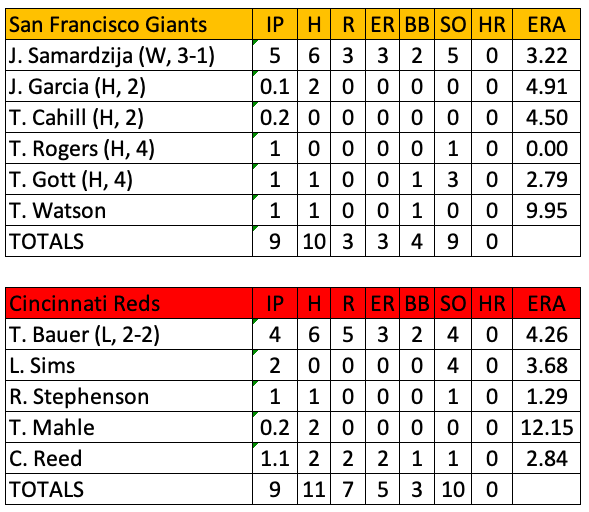 The 2020 schedule as currently constituted has the Reds and Giants squaring off in game two of the series Wednesday. Anthony DeSclafani goes for the Reds, and old friend and righthander Kevin Gausman pitches for San Francisco.

Ken Rosenthal and Evan Drellich had more this morning over at The Athletic on what’s happening behind the scenes with regards to baseball’s planning for a potential season being played. We’ve seen the league have at least three different plans over the last few weeks, but it seems “The Arizona” plan is the one that they feel warrants the most attention.

The Arizona plan is drawing support from some federal officials, and might be the only way for baseball to return in 2020. The logistics would be complicated: Players would be tested for the coronavirus regularly and exist in a sealed environment of hotels and ballparks in the Phoenix area. But over time, the quarantine might be relaxed as the nation gradually re-opens, allowing the plan to evolve.

Rob Manfred, Major League Baseball’s Commissioner, was on Fox Business Network this morning. Here’s what he said about baseball with regards to when things could return.

Dan Scott started up a podcast in early March and he’s landed some big names to join him on the aptly titled Grumpy Old Broadcasters Podcast. This week’s episode includes Marty Brennaman, now former Cincinnati Reds broadcaster. Go give it a listen. Here’s the description for the episode:

Recently retired (after 46 seasons) Cincinnati Reds Hall of Fame broadcaster Marty Brennaman joined Dan, Cobb and Dory for this episode. Never shy with his opinions, Marty dishes on retirement, MLB commish Rob Manfred, where he ranks the Astros cheating scandal and much, much more.