Nick Castellanos’ seventh-inning, two-out single scored Phillip Ervin with what turned out to be the winning run as the Cincinnati Reds (6-7) defeated the Philadelphia Phillies (5-9) by a score of 2-1 in the second game of a four-game series at Great American Ball Park.

Tucker Barnhart doubled with one out, and Jesse Winker was called upon to pinch-hit for reliever Amir Garrett. The sim Phillies manager then removed starter Aaron Nola in favor of lefthanded reliever Ranger Suarez. Sim Reds manager Peter Onte countered by sending up righthanded batter Phillip Ervin to hit for Winker. Ervin made the strategy pay off by hitting a double of his own, scoring Barnhart to tie the game. Shogo Akiyama followed with an infield hit, and Nick Senzel was hit by a pitch to load the bases. Righthanded reliever Deolis Guerra was brought on to face Castellanos, who foiled the strategy with a single to score Ervin and give the Reds the 2-1 lead.

The Phillies threatened in both of the final innings. Michael Lorenzen struck out Bryce Harper with the tying run on second to end the top of the eighth inning. Then in the ninth, Raisel Iglesias allowed the first two batters to reach, but escaped trouble when Didi Gregorius grounded out to end the game.

“We won because we did the little things right,” Strat-O-Matic quoted winning manager Peter Onte as saying. “This is why we practice things over and over and over, so when we get in close games we don’t make mistakes.”

The Reds stand two and a half games behind the first-place Cubs and Cardinals in the NL Central, and are tied with the Brewers in the division basement. 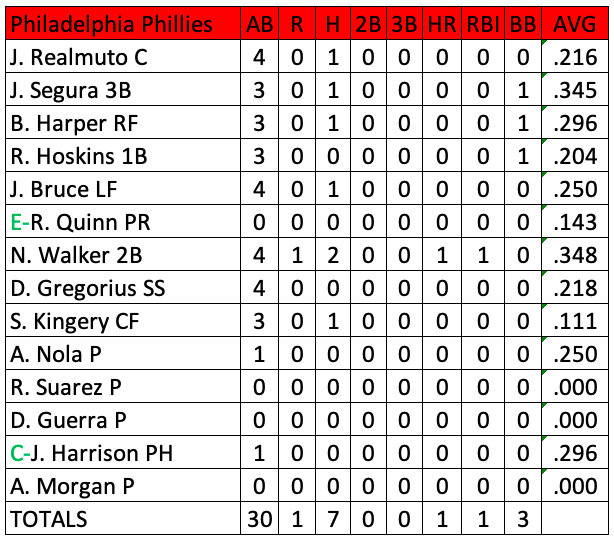 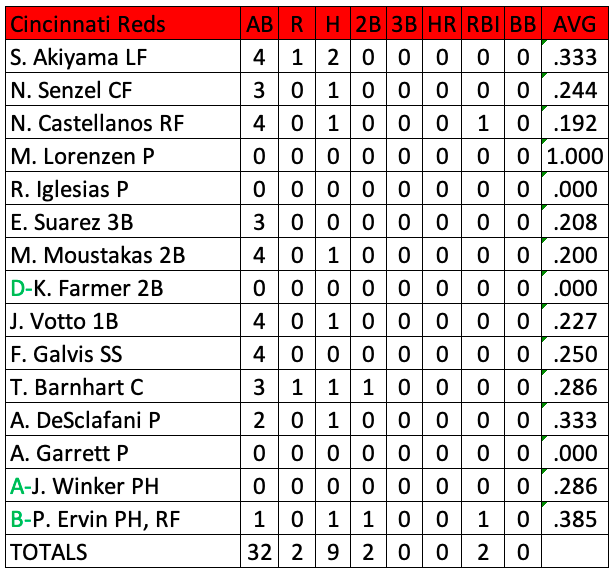 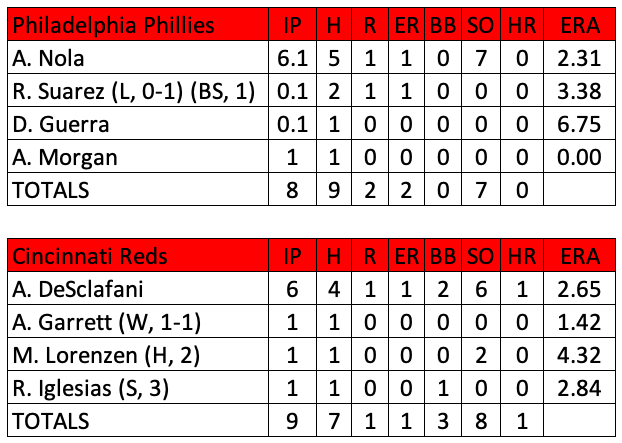 The 2020 schedule as currently constituted has the Reds and Phillies playing game three of the four-game series Saturday. The intriguing pitching matchup has Luis Castillo starting for the Reds, and right hander Zach Wheeler — who the Reds reportedly pursued strongly during free agency — starting for the Phils.

Due to his two-game winning streak as sim manager, Peter Onte will have first priority for submitting the lineup for Saturday’s matchup.

Over at RedsMinorLeagues.com Doug Gray took a look back at the Reds prospect that he believed in the most over the years. That prospect was Robert Stephenson. He talked about why he believed it, and then what happened that changed all of that from that point moving forward. Go check it out.

The Cincinnati Reds prospect that I believed in the most

Amir Garrett is back, defending the Reds in MLB The Show

After winning the initial MLB players “The Show” tournament, Amir Garrett is back representing the Cincinnati Reds in an expanded tournament.

Wick Terrell put together a list of some of the better “short-tenured” Reds careers in recent history over at Red Reporter on Wednesday. The list includes Shin-Soo Choo and Kevin Mitchell. It also includes Skip Schumaker, and you’re going to want to read his section.