Are you stir crazy? I’m stir crazy. There’s too many hours in the day, and I don’t have enough hobbies. I practically finished this week’s simulation on Monday! Normally, I procrastinate my articles until the last minute, so we’re in uncharted territory. Hopefully, this version is better because of it.

If you missed the explainer of this little project, you can find it here and last week’s results here. To give the Sparknotes: I will be randomizing every Reds game by picking a historical box score and subbing in the current Reds. Through two weeks, the Reds rotation has thrown five complete games, which is five more complete games than the Reds threw last season. As you might guess from that stat these randomizations are not meant to be realistic, unlike Tom Mitsoff’s Strat-o-Matic simulation exercise. I just want people to remember how absurd baseball can be and maybe learn about some guys from years gone by. Also, I really want Luis Castillo to log 300 innings now because wouldn’t that be fun?

The Game (9-5 win): For anyone worried about this simulation’s realism or just curious about how your favorite reliever was holding up, well here’s the game for you. The Reds use all but one reliever in an 11-inning win, and for many of the bullpen dwellers, the rust shows. Raisel Iglesias shows up in midseason form however, shutting the door in the bottom of the ninth and tenth. The game ball goes to Shogo Akiyama though, as the center fielder hits his first MLB home run and has his first multi-homer game. The second of Shogo’s shots puts the Reds up by four in the top of the 11th, letting the good guys cruise to another win. Mike Moustakas also hit his first homer as a Red in this game, and Pedro Strop made an uneventful debut from the bullpen.

The Guy: This entry won’t be so much a remembrance as an appreciation. Mookie Betts’ two home runs in this game gave the Red Sox their last win of 2015, as the Beaneaters dropped their final four. From the other dugout, Alex Rodriguez hit his 687th home run in this game and his last homer of 2015, with only nine more in the tank for his final season. While this Red Sox-Yankees matchup had much less on-field significance than other iterations of the rivalry, it did represent a passing of the guard in the AL East. Betts, one of the best players nowadays, came into his own in 2016 while A-Rod, one of the best players of his generation, faded out of (on-field) relevance. And to top it all off, next offseason Betts stands to surpass A-Rod again, as the center fielder is expected to command a $400+ million contract, far more than A-Rod’s once record setting deal. 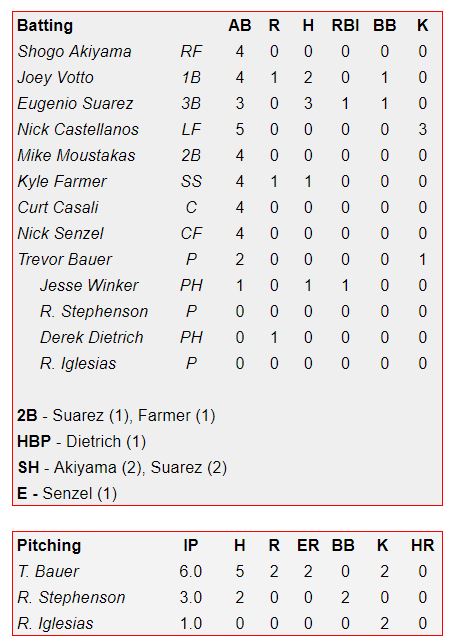 The Game (3-2 win): Look, a Reds game! A real one! Except! The Reds are the Cardinals! Which, sacrilege aside, helps in this scenario because the Cardinals outdueled the Reds in this one 86 years ago. Shogo Akiyama’s bat finally goes quite with his first 0-fer game, but the Japanese outfielder still leads the Reds in OPS by 350 points at final pitch. Trevor Bauer puts forward a solid 6-inning start, and Robert Stephenson shuts the door for 3 innings, sending it to extras. Pinch hitter Derek Dietrich is finally hit by a pitch this season, and Eugenio Suarez plays the hero, doubling home the winning run for his third hit of the game.

The Guy: Frankie Firsch, the player-manager of the Cardinals for the 1934 season, began his major league playing career right after he graduated from Fordham University. Firsch signed with the New York Giants while he was still a senior and manager John McGraw wanted to send him to the minor leagues when he finished school, but the infielder had other ideas. Firsch only hit .226 that season, but his resolve and grit in the field won over his manager. Later in his career, Firsch and McGraw had a falling out and was traded to St. Louis as a result with Rogers Hornsby heading the other way. Firsch finished his career with over 70 WAR and was inducted into the Hall of Fame in 1947. 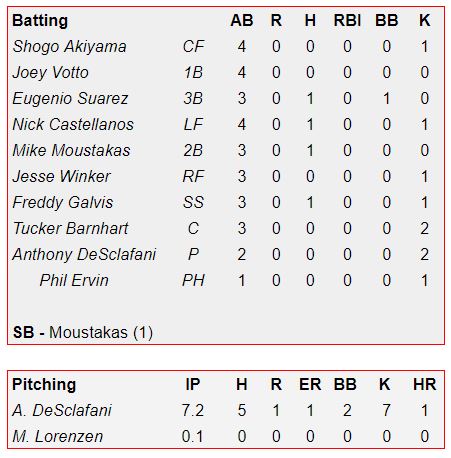 The Game (1-0 loss): Adam Frazier took a full count pitch from Anthony DeSclafani deep for the Pirates’ first at-bat of the game and that was all she wrote for the scoring. The Reds scattered four singles but never mustered a rally of any substance. Shogo Akiyama stayed cold for the second game of the row, officially drawing his scorching hot start to the season to a close. Despite earning the loss, Anthony DeSclafani takes the game ball, nearly throwing a complete game gem. Through one turn of the rotation, DeSclafani leads the Reds’ starters in strikeouts and FIP.

The Guy: Another recent big leaguer, Hisashi Iwakuma appeared as recently as 2017, putting up 0.3 WAR for the Mariners. Iwakuma first came to the Mariners in 2012 after an accomplished 10-season career in Japan. After a respectable rookie year, Iwakuma really made his mark in 2013, throwing 219.2 innings with a 2.66 ERA, a 7.0 WAR, an All-Star selection, and a third-place Cy Young finish. he highlight of Iwakuma’s career probably wasn’t that fantastic 2013 season, but rather the seven-strikeout no-hitter he threw in August 2015. With it, he became the second Japanese pitcher to throw an MLB no-hitter. Iwakuma never pitched quite that well again, he but did record more than 2.0 WAR in five of his six MLB seasons. After spending all of 2018 in the minors, Iwakuma returned to Japan to continue playing. 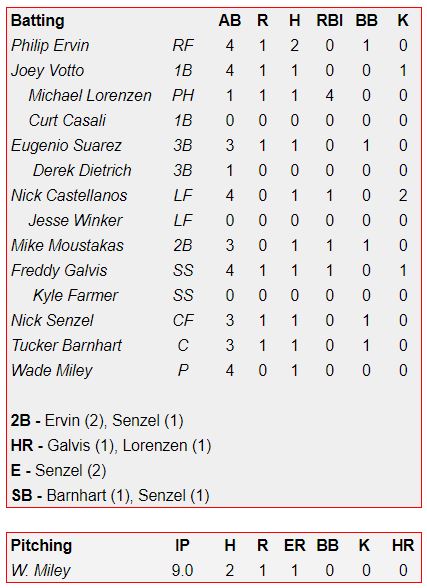 The Game (7-1 win): Wade Miley bounces back from his awful first start as a Red to throw a complete game two-hitter, earning the win against his old club the Brewers. On the offensive side, Shogo Akiyama takes his first day off, with Philip Ervin and Nick Senzel taking over in the outfield. The pair go 3-7 with two doubles and two walks, largely leading the offense. In a bizarre bout of decision-making, David Bell pinch hits Michael Lorenzen for Joey Votto with the Reds up two in the bottom of the eighth, but the pitcher rewards the manager’s faith by blasting a grand slam to break the game open. With the win, the Reds build an early two-game lead in the Central.

The Guy: Rudy May pitched for 16 seasons in the major leagues, appearing in 30 games in 1965 as a 20-year-old for the California Angels. In his debut, May went nine innings, allowing one hit and one run while striking out 10. That game heralded what was to come for May … albeit a bit down the road. Despite a 3.92 ERA and two complete games to his name, May was sent to the minor leagues and didn’t appear in the bigs again until 1969.

For his career, May had four seasons with a sub-3.00 ERA, winning the ERA title in 1980 as a 35-year-old. He vacillated between the bullpen and the rotation his entire career but still managed to throw 87 complete games in just 360 starts. Other fun facts: May’s father didn’t want him to play baseball because he didn’t believe it was “a place for a black ballplayer.” One day, when his dad was at work, May went out and threw a no-hitter in front of Major League scouts, earning a write up in the paper. When his dad found out, he made Rudy throw to him in the backyard. May knocked his father over with a fastball, and two years later, he was in the bigs. Also, Joe Morgan was one of May’s teammates in high school, and the pitcher married singer Eleanor “Punkin” Green of the LA soul group the Superbs. 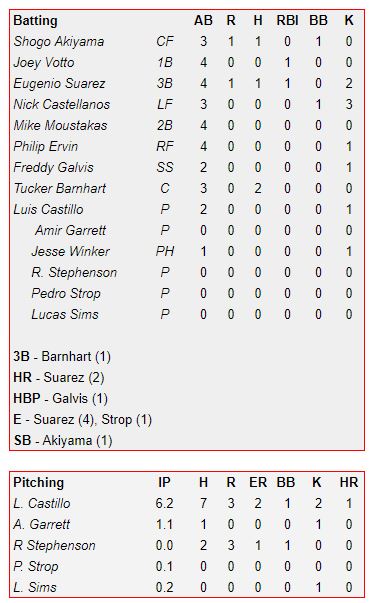 The Game (6-2 loss): For the first time in 2020, Luis Castillo did not throw a complete game. He didn’t pitch poorly but he didn’t pitch that well either and the bats went ice cold. Out of the pen, Robert Stephenson blew up, putting the game out of reach for any Redleg rally. Amir Garrett was lockdown in his second appearance of the season though, while Pedro Strop and Lucas Sims both avoided further damage. Eugenio Suarez provided most of the offense at the plate, with his second home run of the season, but Tucker Barnhart, the only player to manage two hits, takes the player of the game accolades from the utterly uninspiring field.

The Guy: During his seven seasons in the major leagues, Alberto Gonzalez never accumulated more than 0.5 WAR in a season, nor cost his team more than -0.5 WAR. He lived between those poles. Alberto Gonzalez was, for all practical purposes, a replacement-level player. When he was still a minor leaguer, the Yankees traded him to Arizona as part of a package that sent Randy Johnson to the Bronx.

There’s really not that much else to say about Mr. Gonzalez. He pitched one game in relief in his last season in the bigs, which is neat, and he was caught stealing more times in his career than he was successful (2-7 on stolen bases). Also, he’s tagged in this quite pleasant Getty Images stock photo of a rainbow over Camden Yards. I think he’s in the batter’s box, but who’s to say really?

With three games from this century this week, the Reds home run totals have started to climb. Shogo Akiyama and Eugenio Suarez are tied for the team lead with two apiece, but now six Reds have hit a dinger. On the pitching side, the Reds are preventing runs and getting wins, but the underlying numbers don’t look too hot. If this simulation were real life, I’d be worried about the Reds starters crashing back to earth with that large of a difference between their ERA and their FIP, but it’s not so predictive stats don’t matter. Viva counting stats! 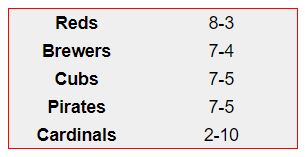