A seven-run first inning explosion made the rest of the game a relative cakewalk, as the Reds (5-7) toppled the Philadelphia Phillies (5-8) by a score of 14-6 in the opener of a four-game series at Great American Ball Park.

Seven of the first eight Cincinnati batters in the first inning reached base safely in an apparently brilliant bit of lineup creation by Redleg Nation sim Reds manager of the day Peter Onte. Shogo Akiyama led off with a double, then Nick Senzel, Nick Castellanos and Eugenio Suarez each followed with singles off Phillies starter Vince Velasquez. Mike Moustakas then cleared the bases with his third homer of the young season.

After singles by Tucker Barnhart (the first of his three hits) and Freddy Galvis, and a sacrifice bunt by winning pitcher Trevor Bauer, Akiyama hit a slow roller to second baseman Nick Walker which went as an infield hit — his second hit of the first inning. When Walker mishandled the grounder and it squirted away from him, that allowed Galvis to score as well on the error.

The Phillies closed to within 10-6 after scoring four in the top of the eighth off Tyler Mahle, but the Reds sealed things in the bottom of the same inning with two-run homers by Suarez and Galvis.

Moustakas was hit by a pitch in the seventh inning and was removed for pinch-runner Josh VanMeter, but his injury will not force him to miss any additional game action.

Bauer went six innings, allowing only four hits and a walk while striking out six. Mahle’s ugly outing was the only blemish on the bullpen’s performance on this day.

The Reds’ stand three and a half games behind the first-place Cubs in the NL Central, and are tied with the Brewers in the division basement. 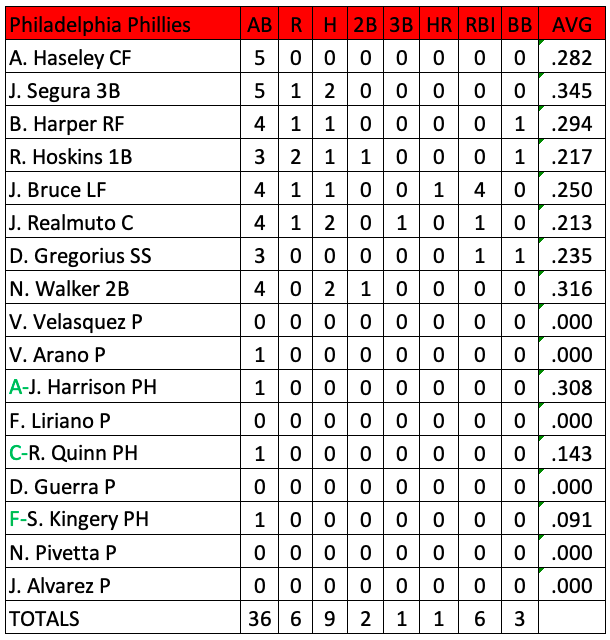 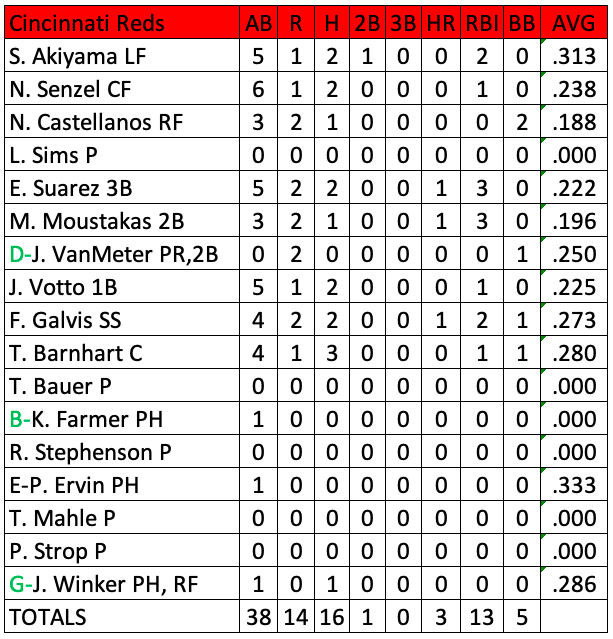 The 2020 schedule as currently constituted has the Reds and Phillies playing game two of the four-game series Friday. Anthony DeSclafani pitches for the home team, and righthander Aaron Nola goes for the Phillies.

Today was supposed to be the start of the minor league baseball season. Over at RedsMinorLeagues.com Doug Gray looked at three players who won’t be starting play today that could (and still may) have seen 2020 be quite important ones for them.

What should have been: Reds Minor League Opening Day

Craig Edwards of Fangraphs wrote about what is happening in South Korea right now with their professional baseball league, how they are hoping to open their season in early May, and what the country has done that could lead to that happening. He also notes how, at least right now, following that model in the US seems a bit further down the road – but that there is a bit of a road map to seeing it happen.

Despite the tough times many of us seem to be going through with regards to our current, or perhaps concerns over our future income – that may not be the case for everyone. Tom VanHaareen of ESPN reported yesterday that a game used bat of Lou Gehrig sold for $1,025,000 last week. [Editor’s Note from Doug] I wonder what I could get for my cracked, but autographed Jose Guillen bat these days? Maybe the non-autographed Homer Bailey cracked bat I’ve got could get half of that cool million?