A three-run rally in the bottom of the sixth brought the Cincinnati Reds (4-6) from behind to defeat the Milwaukee Brewers (4-6) by a score of 3-2 in the opener of a nine-game homestand at Great American Ball Park.

Milwaukee jumped out quickly against simulated Reds starter and winner Luis Castillo. Lorenzo Cain led off with a single, and one out later, Keston Hiura launched his second homer of the season to give the visitors a 2-0 lead. That would be all that the Brewers would score against Castillo and the Reds bullpen, however.

The sim Reds rally in the sixth came against Brewers reliever Corbin Burnes, who entered the game the inning previous when starter Brandon Woodruff suffered a simulated injury which will leave him unavailable for 30 games — a rather significant blow to a Reds divisional rival. Nick Castellanos led off against Burnes with a single, and Josh VanMeter followed with a double. Curt Casali, who entered the game after Tucker Barnhart injured himself while swinging at a Woodruff pitch and striking out in the fourth, drove in Castellanos and VanMeter with a base hit to right to tie the game, and advanced to second on an error by right fielder Christian Yelich. A passed ball by catcher Omar Narvaez sent Casali to third, from where he scored what turned out to be the winning run on a pinch-hit groundout by Phillip Ervin.

Barnhart’s simulated injury, unlike Woodruff’s, is relatively minor. He will miss only Tuesday’s game before becoming available again. (Strat-O-Matic’s simulation algorithm includes injuries, including the amount of time players miss due to injuries.)

The Reds bullpen was stellar over the final three innings, allowing no base runners while striking out five. VanMeter and Eugenio Suarez stroked two hits apiece for the winners, and Nick Senzel stole two bases.

The Reds win tied them with the Brewers in the basement of the simulated NL Central. A Pirates win over the first-place Cubs drew Cincinnati within three games of the top. Congrats to Redleg Nation commenter/”manager” Tomn for finding the key to victory with the starting lineup he submitted Sunday night! 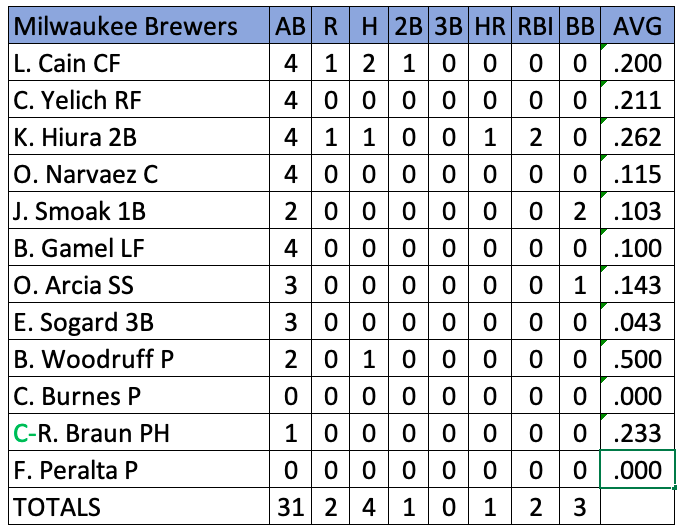 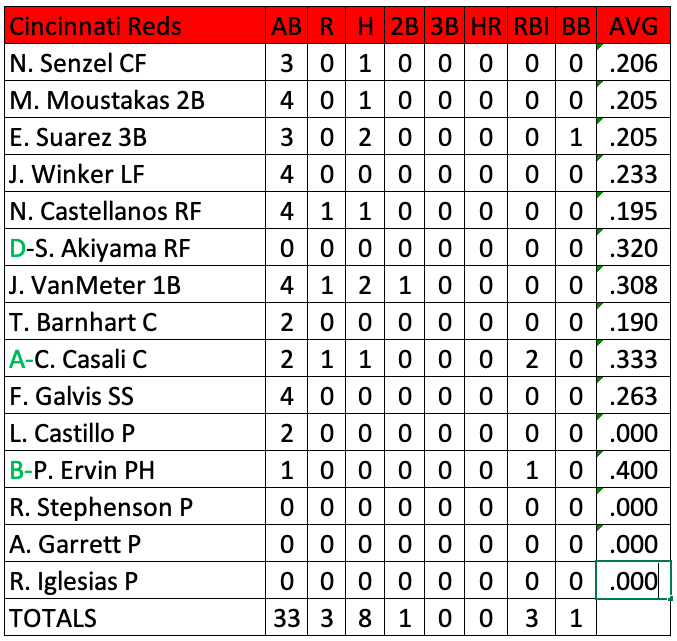 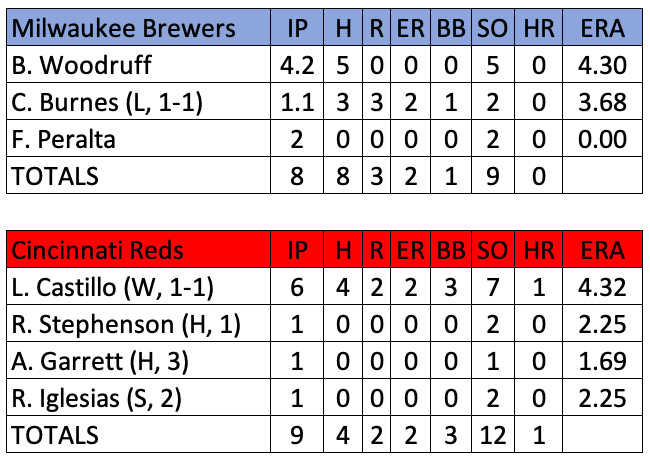 The 2020 schedule as currently constituted has the Reds and Brewers matching up Tuesday in the finale of the brief two-game series, with the Reds going for the sweep. Sonny Gray will pitch for Cincinnati, and righthander Adrian Houser on the hill for the Brew Crew.

There’s more information out now on what was going on in the 2019 playoffs with the baseball and why all of a sudden it seemed like it was not the one that was being played with all season long. Dr. Meredith Wills got her hands on some playoff baseballs and dug into the differences over at The Athletic.

Jeff Passan and Alden Gonzalez of ESPN wrote this morning about how South Korea could be a model for how the U.S. could go about returning to the playing field – even if it’s without fans in the stands.

HALFWAY ACROSS THE WORLD, in the country that thus far has stifled the coronavirus better than any, they’re playing baseball again. The games are intrasquad scrimmages. The players sometimes wear masks on the field. It is sports with a dystopian twist. And yet South Korea has pitchers throwing pitches and hitters swinging bats and fielders gloving balls, and the rest of the world doesn’t.

Right now, things are going as planned by the Korean Baseball Organization. But other leagues around the world have given thoughts to it, and one even attempted it and after several players tested positive, shut things back down. Here’s what former Red Dan Straily, who is in his first season in the KBO, had to say:

If anybody, anybody — if the No. 1 starting pitcher to the person cleaning, security, R&D — anybody gets sick in that time, we postpone two weeks,” Straily told ESPN in an interview from Busan, South Korea, a city of 3.5 million where the Giants play. “We’ve got to make sure that no one else got sick.

And that’s the big concern around the world with restarting competition – what happens when someone inevitably contracts the virus? South Korea has been one of the nations that has seemingly done well in controlling the spread of the virus. As noted in the article – leagues in all sports around the world are watching to see how this goes, hoping to be able to model their future this year in a similar way if it works. Go read the article – it’s got plenty of outstanding information in it.

The brief time that Jimmy Wynn was a Red

In case you missed it earlier today here at Redleg Nation, we took a look back at when Jimmy Wynn was with the Cincinnati Reds organization, and why it was his talent being too good that led to his exit from the organization.

Remembering when Jimmy Wynn was with the Reds