Despite what the Notorious B.I.G might have you believe, COVID-19 has not been all a dream. In fact, I am somehow under a stricter lockdown than I was last week as D.C. has ordered all citizens to shelter in place. It doesn’t look like we’re waking up from this baseball-less nightmare any time soon, so might as well dive into another week of historical Reds simulations!

If you missed the explainer of this little project, you can find it here. To give the Sparknotes: I will be randomizing every Reds game by picking a historical box score and subbing in the current Reds. Opening Day gave us a game from the 1940s, which means Luis Castillo threw a 14.0 inning complete game. Unlike Tom Mitsoff’s Strat-o-Matic simulation exercise, these randomizations are not meant to be realistic. More than anything, I just want people to remember how absurd baseball can be and maybe learn about some guys from years gone by. Also, I really want Luis Castillo to log 300 innings now because wouldn’t that be fun? 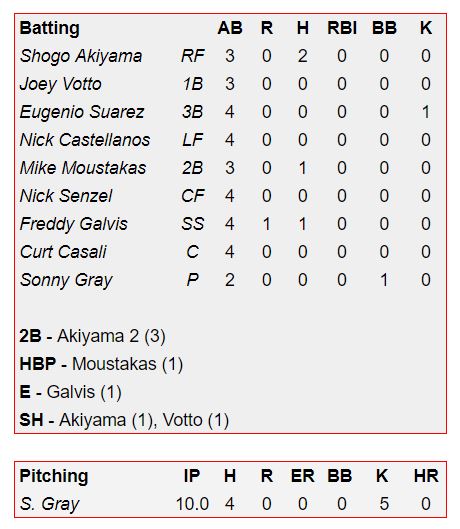 The Game (1-0 win): As you can see, the second game of the Reds season went much like the first. Sonny Gray threw an extra-inning complete game shutout, Nick Senzel got his first start, and Shogo Akiyama continued his torrid American debut with a pair of doubles. It’s unclear who drove in the winning run because no one in the box score is credited with an RBI. But working backwards, we can assume Galvis led off with a single, Casali was retired, Gray walked, Akiyama sacrifice bunted but Paul Goldschmidt booted the throw, loading the bases. With one out, instead of swinging away or looking for a sacrifice fly, Joey Votto bunted into no-man’s land to bring Galvis home. A walkoff hit by pitch and a walkoff bunt. 2020: What a year.

The Guy: Highlanders’ right fielder Willie Keeler actually bunted to finish off this game, the second of late fall doubleheader. Much like Votto, Keeler was an OBP king, retiring with a .388 mark, good for 106th all-time. Only 5-foot, 4-inches tall, Keeler managed to play 19 years in the bigs, winning the batting title twice and earning posthumous enshrinement in the Hall of Fame in 1939. His nicknames — Wee Willie and “Hit ’em where they ain’t” — reflected his stature and his playing style. “Keeler could bunt any time he chose,” said Honus Wagner. For our fake Reds, Keeler’s bunting is a blessing. 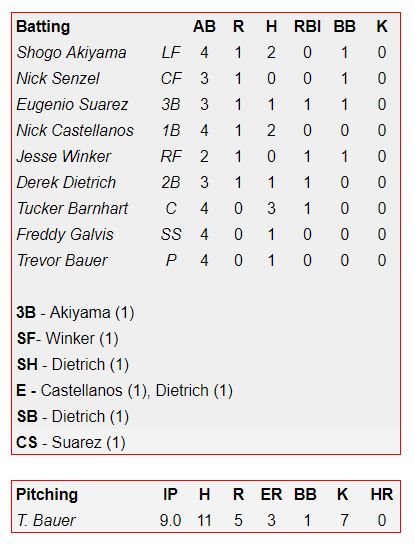 The Game (6-5 win): Another day, another complete game for a Reds pitcher, but at least with Trevor Bauer on the bump this one kind of makes sense. It wasn’t the prettiest game — only five of the 11 total runs were earned — but the Reds had their fair share of highlights. With Bauer at the plate with two outs in the bottom of the second, Derek Dietrich decided to steal home and put the Reds up by two. Dietrich also brought home the Reds last run in the bottom of the third, singling to bring Jesse Winker around.

The Guy: In his 19-year career, Burleigh Grimes threw 314 complete games, leading the league on four separate occasions. (A fitting analog for Bauer.) He received MVP votes in four seasons as well, nearly winning it in 1928, the season this game is from, but finished third. That year, Grimes compiled a 25-14 record across 330.2 innings with a 2.99 ERA, but only struck out 97 batters. Grimes’ nickname was “Ol’ Stubblebeard,” and the New York Times once wrote of him: “He always had a two-day black stubble on his face. He walked with a swagger that infuriated batters, and when he measured a hitter from the mound he would peel back his lips to show yellow teeth in a snarl.” Grimes was inducted to the Hall of Fame in 1964. 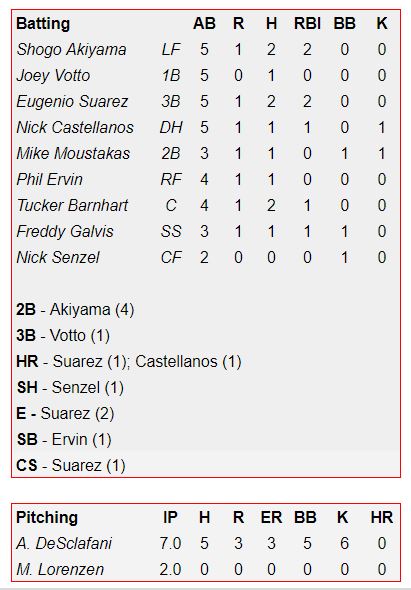 The Game (7-3 win): Shogo Akiyama leads off with another double, setting up Eugenio Suarez’s first dinger of the season. Pitching with an early 2-0 lead, DeSclafani gives half of it back in the bottom of the second and then the rest in the bottom of the fifth. But our star of the game, Nick Castellanos, picks an excellent time for his first homer as a Red, hitting a leadoff shot to deep left. The Reds bat around that inning, scoring five and putting the game away. Also, the Reds go to their bullpen for the first time! 40 INNINGS INTO THE SEASON.

The Guy: Don Baylor probably has more in common with Derek Dietrich than he does Nick Castellanos given his propensity for hit by pitches, but in this game, his power made the difference. Baylor hit 338 homers in his career, and was hit by 267 pitches. He once said, “My first goal when I go to the plate is to get a hit. My second goal is to get hit.” Baylor, former teammate Frank Robinson, and Joe Torre are the only three men to win both an MVP award and Manager of the Year award. 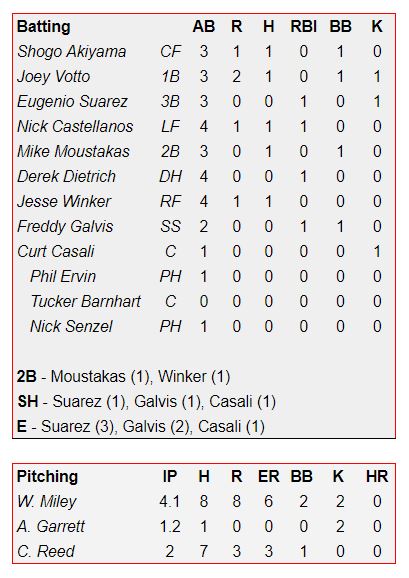 The Game (11-5 loss): Well, it was bound to happen. The Reds lost their first game of the season. Wade Miley’s first start as a Red ended in meltdown, with Miley giving up four runs in the bottom of the fifth before Amir Garrett came on to staunch the bleeding. The bats never really came alive either, as the torrid Shogo Akiyama only managed a paltry single and Nick Senzel stayed hitless for the season. Jesse Winker notched his first hit of season, but somehow still has more RBIs than hits. Once Garrett was lifted, Cody Reed got lit up in his first relief appearance, letting this game become a blowout.

The Guy: Tom Downey scored twice in this game, earning star status even if his corollary (Joey Votto) didn’t merit a mention in the recap. Downey’s career was wholly uneventful. He played three seasons with the Reds to start his career before bouncing around the National League in 1912. Perhaps the most interesting factoid about Downey is that he played six different positions during his time with the Reds, only missing left field, center field, and pitcher. 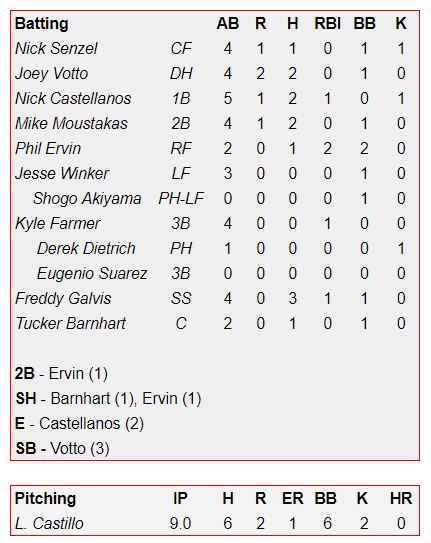 The Game (5-2 win): For the second time in as many starts, Luis Castillo labors through a complete game win. In extremely un-Castillo fashion, the Reds ace walks six and strikes out none but holds the Blue Jays to just two runs. With David Bell resting Shogo Akiyama, Nick Senzel finally gets his first hit of the season. Kyle Farmer makes his first appearance, spelling Eugenio Suarez at third. Joey Votto looks more and more like vintage Votto with each game and surprisingly has found some speed in his old age, swiping his third bag of the season. But Phillip Ervin is our star of the game, doubling home the Reds first two runs and walking twice to boot.

The Guy: On a team that featured Phil Rizzuto, Joe DiMaggio, and Yogi Berra, the lesser known Joe Collins emerged as “the guy” for this game. Collins had a serviceable MLB career, compiling 12.0 WAR despite a season-best OPS of .845. Collins did win five World Series with the Yankees, which maybe explains why, when the Yankees traded him to the Phillies in 1958, he retired in protest instead. The trade was voided, and the Yankees returned Ed Bouchee to the Phils, who finished dead last in 1958. Joe Collins, the man who really hated Philadelphia, we salute you.

Shogo Akiyama leads all Reds hitters with a 1.311 OPS while Sonny Gray takes the pitcher’s crown despite Luis Castillo’s masterful performances. Other highlights: The Reds have as many triples as home runs. Remember when hitters played small ball and the ball didn’t rocket off the bat? Well, here’s what that would look like.