The Toronto Blue Jays (2-5) roughed up Luis Castillo for four runs in the second inning, and rode the stellar pitching of Chase Anderson to a 5-0 shutout of the Cincinnati Reds (2-4) in the rubber game of a three-game series at Rogers Centre in Toronto.

The loss was the Reds’ second straight, and the first time they have been shut out in the simulated season.

Three Toronto hits, combined with two Castillo walks and a balk, scored four Blue Jays runs in the bottom of the second inning. Castillo avoided further damage in the inning by inducing hot-hitting Bo Bichette to hit into an inning-ending double play. Bichette later hit a solo homer off Tyler Mahle in the seventh to round out the scoring.

As in recent “actual” seasons, the Reds are stumbling out of the gate, losing four of their first six. 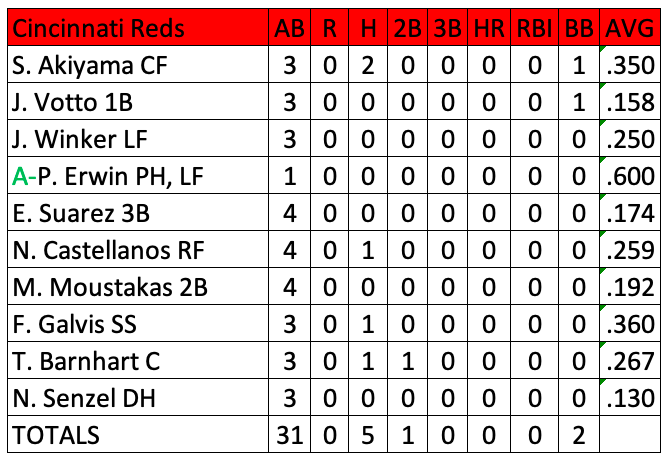 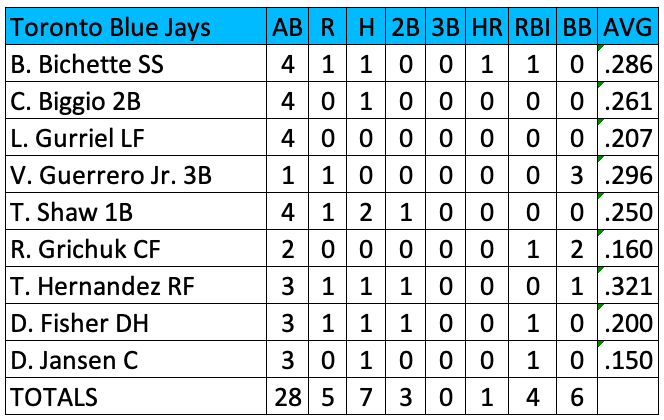 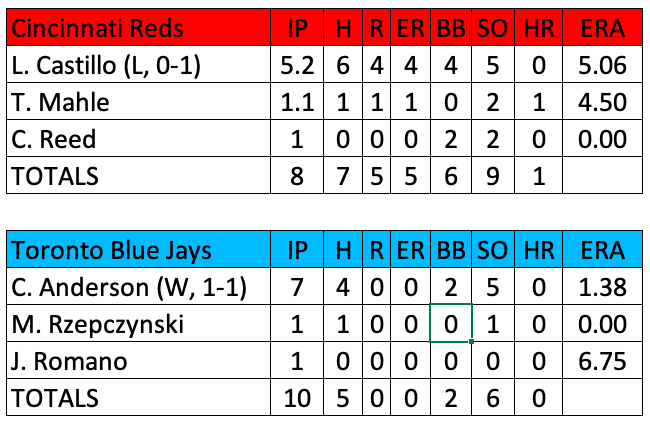 Matt Bowman on crafting his cutter

David Laurila of Fangraphs spoke with Reds reliever Matt Bowman about how he developed his cutter. It’s a rather interesting story that involves Roy Halladay, Mariano Rivera, and a television program. Go check it out.

Matt Bowman, Chaz Roe, and Justus Sheffield on Crafting Their Cutters and Sliders

The 2020 and 2021 Major League Baseball drafts have been dramatically cut down. One player rep, Nick Ahmed, spoke about what he felt happened with regards to the association agreeing to cutting the draft down to five rounds this year and limiting undrafted player signing bonuses to just $20,000 for the next two drafts. Over at RedsMinorLeagues.com I wrote about the situation, just how little money is actually saved by each team with this plan, and more.

Hearing from one MLB Player on dealing away amateur player rights

Speaking of not-Major-League-Baseball stuff, former Cincinnati Reds outfielder Shin-Soo Choo is donating $1000 to each player in the Texas Rangers farm system. Players in the minor leagues are getting $400 per week, through May 31st (or the start of the minor league season if it comes sooner).

According to a report in Naver Sports, #TexasRangers OF/DH Shin Soo Choo will be donating 1K to each 190 minor league players in the org to help them get thru this difficult time. Not sure if donation is the right word, but the total giving comes out to 190k. #mlb