After trailing 7-0 after six innings, the Cincinnati Reds (2-3) came all the way back to tie the Toronto Blue Jays (1-5), only to lose in the bottom of the tenth inning in the middle game of a three-game series at Rogers Centre in Toronto.

In the bottom of the tenth inning, Toronto’s Travis Shaw led off with a single against Amir Garrett. One out later, Joe Panik’s single sent Shaw to third. Manager David Bell brought in Raisel Iglesias to face Bo Bichette. Iglesias induced a ground ball, but shortstop Freddy Galvis was unable to cut down Shaw at the plate as he scored the winning run.

Toronto scored seven runs off Reds starter Wade Miley in the first five innings, and it appeared as though the home team was on its way to an easy win. But the Reds offense blazed back in innings seven and eight. Eight of the Reds’ 11 hits came in those two innings, including two by Shogo Akiyama. Cincinnati had no extra-base hits during the two-inning rally, but was aided by a Toronto passed ball and an error by Bichette. Akiyama, Joey Votto and Phillip Ervin had two hits apiece for the visitors.

After Miley’s shaky start, the Reds bullpen pretty much locked down the Blue Jays until the winning 10th inning rally. 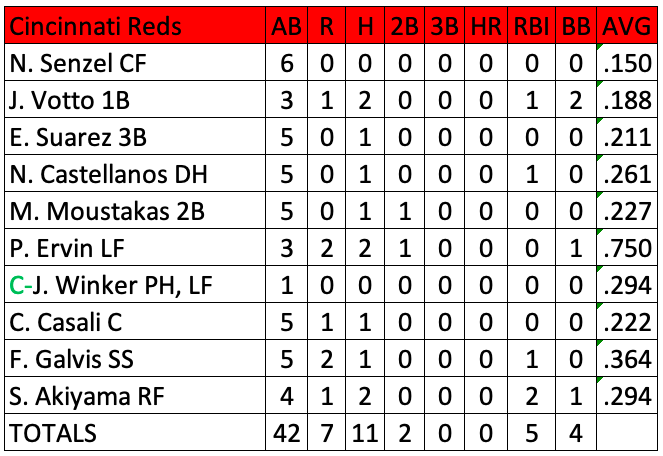 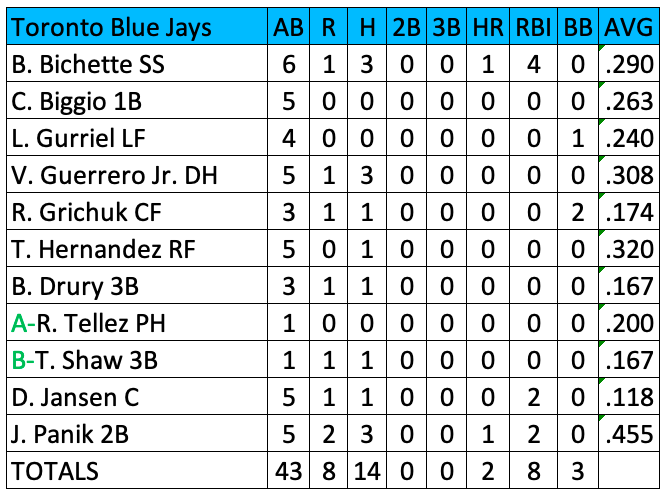 The 2020 schedule as currently constituted has the Reds playing the rubber match of the three-game series against Toronto on Wednesday. Right-handed pitchers Luis Castillo and Chase Anderson are scheduled to start for their respective teams.

Bradford William Davis of The New York Daily News  wrote about how after all season of playing with a “juiced” baseball, once the playoffs began, a new ball was put into use that wasn’t the same as the one used during the regular season. Davis spoke with both players and consulted Dr. Meredith Wills, who presented her findings at the 2020 SABR Analytics Conference earlier this year about the differences between the baseballs after examining multiples of each.

Is the #2 spot in the lineup truly the best for a teams top hitter?

Something that we’ve seen pop up over the last handful of years is that the best hitter on a team should hit second in the lineup. For about the first 130 years of baseball the best hitter almost always was thought to slide best into the #3 spot in the lineup, but that thinking changed a bit in more recent times. Once we started being able to simulate the outcomes of things a lot easier with the help of computers, the best lineups almost always had the best guy hitting second because it meant he’d get a few more trips to the plate over the course of the year, and lead to a few additional trips to the plate with a runner on for the other good hitters in your lineup.

Russell A. Carleton, better known in some circles of the internet as Pizza Cutter, took a look at whether the second spot in the lineup is indeed the best place for the teams best hitter over at Baseball Prospectus today. There’s some “gory math” within the article, but if that’s not for you, you can just skip on by it and trust that he knows what he’s talking about and read the conclusion, too. That conclusion, isn’t definitive and there’s plenty of wiggle room on it – but the final paragraph of the piece leaves us with this: