Tucker Barnhart’s two-out double in the bottom of the 10th inning scored Freddy Galvis to give the Cincinnati Reds a 6-5 extra-inning victory in game two of the 2020 Major League baseball season, simulated by Strat-O-Matic games of Glen Head, N.Y.

The simulated victory evened the Reds’ record at 1-1.

Please let us know in the comments below your thoughts on whether you’d like Redleg Nation to cover these results on a daily basis, or perhaps a weekly basis (one wrap up per week with a few details from each game, and then a look back at the week with a recap of the season performances to that point), or not at all. We want to give our readers the content that they’re looking for during these difficult times and at all times. Let us know!

Galvis doubled with two out and nobody on in the home 10th inning against Cardinals righthander Daniel Ponce de Leon. Barnhart then followed with his game-winning double.

St. Louis led 5-2 after five and a half innings, scoring four off of Reds starter Sonny Gray, who struck out eight in five innings. Robert Stephenson surrendered the fifth St. Louis run in his one-third of an inning before being relieved by lefthander Cody Reed.

Eugenio Suarez and Mike Moustakas hit solo home runs for the Reds. Galvis and Nick Senzel each recorded three hits. Senzel pinch-hit for Gray, and then remained in the game in centerfield in a double-switch, replacing Shogo Akiyama.

That was the result today as Strat-O-Matic games of Glen Head, N.Y., continued its announced plan to simulate the entire 2020 Major League Baseball season on a day-by-day basis for as long as actual gameplay is on hold.

Here is a portion of the box score provided by Strat-O-Matic: 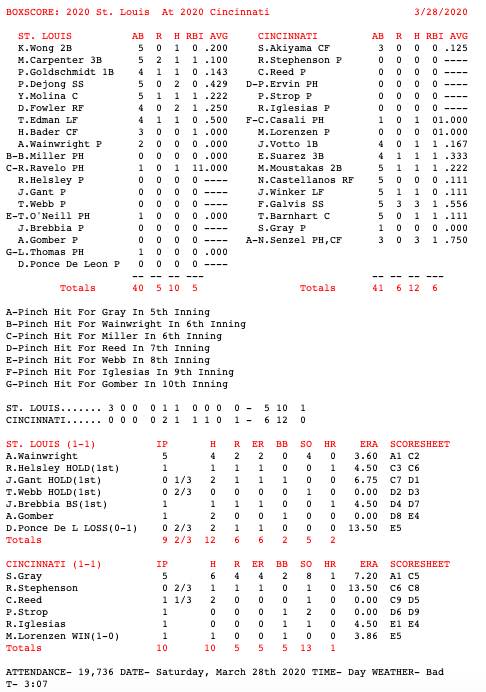 Click the adjacent box score screenshot for a more extensive box score (one that was taller than my ability to capture a screenshot allowed). See the recap of the highlights of the entire simulated March 28 MLB schedule.

The simulation software will keep comprehensive statistics for all teams for the season, so we’ll be able to track year-to-date leaders in many statistical categories. You can follow the season at Strat-O-Matic.com, where they plan to post the results from each day’s schedule at 2 p.m. Eastern time.

Here are the standings after the full schedule of March 28 games: 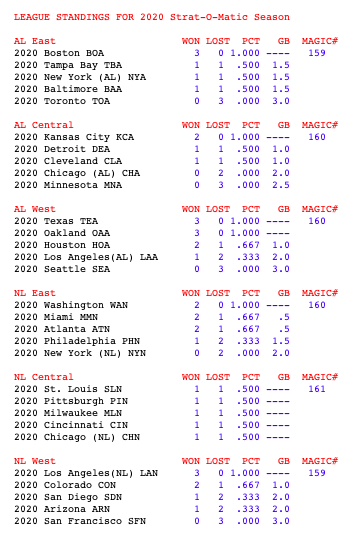 Statistical categories that include Reds in the very early going: 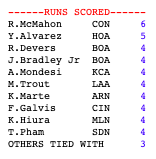 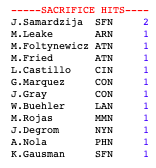 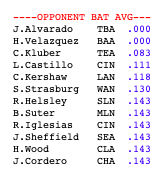 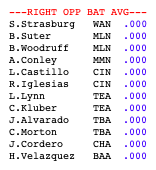 If you have not seen it yet, please check out Wesley Jenkins’ randomized simulation initiative.

The 2020 schedule as currently constituted has the Reds and Cardinals playing the rubber match of the season-opening three-game series Sunday at Great American Ball Park.