The 2020 season didn’t start any better than the 2019 season ended for Cincinnati Reds reliever Raisel Iglesias.

Iglesias surrendered a tie-breaking solo home run to St. Louis’ Kolten Wong in the top of the ninth inning, and then Cardinals reliever Giovanny Gallegos retired the Reds in order in the bottom of the ninth to earn the save and preserve the 4-3 victory for the visitors.

That was the result today as Strat-O-Matic games of Glen Head, N.Y., began its announced plan to simulate the entire 2020 Major League Baseball season on a day-by-day basis for as long as actual gameplay is on hold.

Here is a portion of the box score provided by Strat-O-Matic: 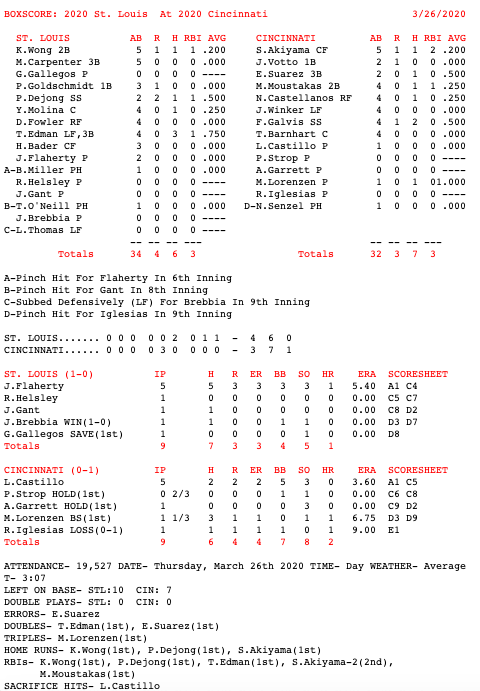 Click the adjacent box score screenshot for a more extensive box score (one that was taller than my ability to capture a screenshot allowed). See the recap of the highlights of the entire simulated March 26 MLB schedule.

Strat-O-Matic has been in the sports simulation business since the 1960s. A USA Today article published today contained this explanation:

For the Reds, Shogo Akiyama’s fifth-inning home run drove in two runs as part of a three-run frame that broke a scoreless tie. After that home run, Joey Votto reached base (presumably by a walk) and then scored on an RBI hit by second baseman Mike Moustakas.

However, Reds pitching could not hold that lead. Luis Castillo came out for the sixth, but failed to retire a batter, allowing two St. Louis runs in that frame before being relieved by Pedro Strop. Michael Lorenzen allowed the tying run to score in the eighth before Iglesias came on in the ninth.

The game simulation does not account for players who are currently recovering from actual injuries and whose status would have been questionable had the season actually begun today. Eugenio Suarez started at third base, hitting a double and making a fielding error. Nick Senzel pinch-hit in the ninth but did not reach base.

Shortstop Freddy Galvis was the only Red with more than one hit, going 2-for-4. Lorenzen had a triple in his only at-bat.

The simulation software will keep comprehensive statistics for all teams for the season, so we’ll be able to track year-to-date leaders in many statistical categories. You can follow the season at Strat-O-Matic.com, where they plan to post the results from each day’s schedule at 2 p.m. Eastern time.

What I expect to learn is what effect the additions of Akiyama, Moustakas, Nick Castellanos and Wade Miley might have on a Reds team in a game based on 2019 statistics. The Cubs, Brewers and Cardinals teams will reflect the notable players who have been removed from their respective 2019 rosters.

Please let us know in the comments below your thoughts on whether you’d like Redleg Nation to cover these results on a daily basis, or perhaps a weekly basis (one wrapup), or not at all. We want to give our readers the content that they’re looking for during these difficult times and at all times. Let us know!

If you have not seen it yet, please check out Wesley Jenkins’ randomized simulation initiative.

The 2020 schedule as currently constituted has the Reds off tomorrow, and they will resume the three-game series at GABP against the Cardinals on Saturday.