Ahhh, Opening Day. My, and I would assume your, favorite day of the year. The day all of the planning and plotting, signing and trading, drafting and developing comes to a head once again. Personally, I was most excited to watch the debut of Shogo Akiyama this year, but that small pleasure will have to be held for another day. For now, Opening Day is nothing but another day on the calendar and no baseball in sight.

I moved to a new apartment right before quarantine and as such cardboard boxes in various states of use are littered around me daily. They sit in every nook, waiting to be unpacked. But instead of rising to the task, I’ve found myself wishing to return to my childhood days when a cardboard box was a rocket ship, submarine, or tortoise shell. The days when I entertained myself with my imagination, not Twitter or video games. And so, I’ve decided to approach Opening Day and this quarantined season the same way: Just pretending it’s happening anyway.

I know Tom Mitsoff asked a couple days ago about simulating the Reds season via Strat-O-Matic, which sounds delightful. But I don’t necessarily want a realistic replica of what should have happened. I want the randomness of baseball, the “Derek Dietrich becomes a demigod for a month” type of thing. That’s when baseball’s at its best. When nobody understands what’s happening, but somehow it still makes sense.

So instead of a realistic simulation, I will be randomizing every Reds game we’re missing. How you ask? Well first, I will make the lineups. For this to work, I must give myself that power. I will stay as true to real life managerial decisions as I can, but I will be upfront that nobody in this randomizer of mine will get hurt. All the starters will be playing most of the games.

Next, I will use Baseball-Reference’s random generator to call up a historic box score. As far as can tell, the site has results from every game since the dawn of time, so one day could be the Knickerbockers from 1890 while the next is the Dbacks from 2011. Who’s to know. The box score will become the Reds’ box score for that game, with all stat totals and scores staying the same. I will keep track of the Reds’ team stats as we go along, and I will create league-wide standings with all other games decided by a coin flip.

And finally, because this method of randomizing gives us an easy window into the past, I will pick one player from the old box score to briefly remember each game. We can all learn something, or just remember something. Whatever the case, it will be more baseball content past just a simple sim of hits and outs, wins and losses.

Will this be a realistic simulation? Absolutely not. But will it be fun? I think so! Hopefully you do too. 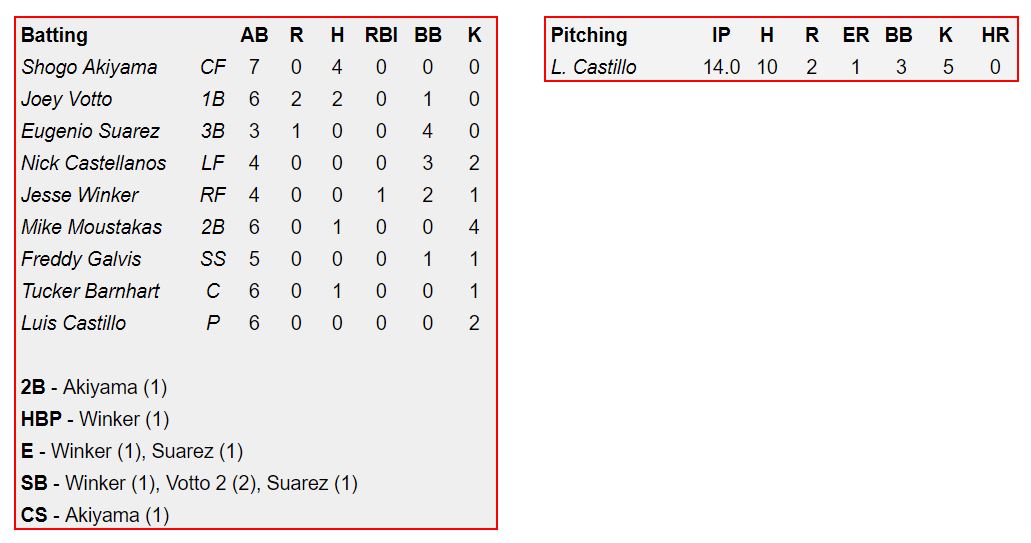 Well as you can see, this little experiment has started off excellently. In the year of Rob Manfred, 2020 AB (After Bud), Opening Day starter Luis Castillo pitches 14 innings to get his team the win and take home the game ball. 14 INNINGS. THE REDS HIRED KYLE BODDY TO PREVENT THIS EXACT SCENARIO FROM EVERY HAPPENING. DUSTY BAKER IS WITH THE ASTROS NOW.

But the randomizer bows to no coach and the decision to leave the Reds ace in for the entirety of the contest pays dividends. Castillo allowed his only earned run in the fourth as a single, fielder’s choice, and another single bring Paul Goldschmidt around to score. The Reds battled back in seventh, scoring twice on a double steal initiated by Joey Votto. When the first baseman broke toward third, Cardinals’ catcher Yadier Molina lost his cool and flung the ball down the line. Both Votto and Suarez came around to score.

But the true heartbreak is in the ninth when Castillo gives up a leadoff single before Jesse Winker bobbles a ball in right, setting up second and third with no outs. The tying run scores, sending this thing into extras but Castillo stems any additional damage. Any normal coach would take Castillo out there, letting the bullpen handle the free baseball but not David Bell. He knows his ace has it. Castillo gives up singles in the 10th and 11th before firing three straight three-up, three-down innings.

With the top of the lineup at the plate, the 14th is the Reds chance to win. Akiyama lays down a bunt single to lead it off, advancing to second on a wild throw by the Cardinals pitcher. Votto, misguidedly, also bunts, and this time the Cardinals convert, nailing Akiyama at third. The pitcher walks Suarez, and then balks while pitching to Castellanos, leading to an intentional walk to load the bases.

Every thing on the line, Jesse Winker comes to the plate, hoping to redeem his error that allowed extra innings. Digging in, Winker stares down the Cardinals’ closer and … is promptly drilled in the leg. Reds win on a walkoff hit by pitch. Derek Dietrich charges from the dugout shirtless, waving his uniform above his head. Winker sees him coming and takes off toward centerfield, stripping off his own uniform all the while. Akiyama shakes his head and laughs. Baseball is back, baby. 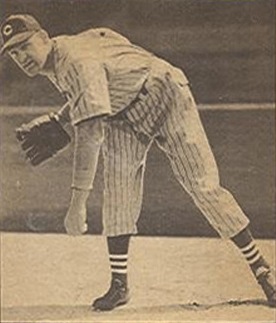 In reality, this Tigers-Indians game was the last game of the 1940 season, with the Indians’ win a Pyrrhic victory as their season ended and the Tigers proceeded on to the playoffs. Like now, that season was finished with an uncertain future as Nazi Germany was in the early stages of its belligerence and Pearl Harbor was only two years off.

Indians’ pitcher Al Milnar, who pitched all 14 innings to earn the win, enlisted in the U.S. Army in 1944, serving in the Pacific Theater of the war. While stationed in the Phillippines, Milnar organized two baseball leagues for the soldiers, as well as basketball and volleyball leagues. As a baseball player, Milner has a couple of the more ignominious accolades next to his name. For one, he gave up the single that stretched Joe DiMaggio’s hitting streak to 56 games. For another, he came within one out of a no-hitter in 1942, with that game also stretching to 14 innings but ultimately ending in a scoreless tie.

Milner’s best season was 1940, with a 3.27 ERA and an All-Star selection to his name. Hopefully that bodes well for our own ace whenever the real baseball season returns.

We’re looking for some ways to try and keep things fun around here, and both Wes and Tom proposed ideas around interesting ways to “simulate” the baseball games that we were missing. Tom’s post will be up later. Let us know what you think about the formats. We’d love your ideas about each of these types of “simulations”.