Today is supposed to be the day that 44,000 people are gathering at Great American Ballpark to watch the 2020 Cincinnati Reds start their march towards raising the World Series trophy in October. Unfortunately the world is on fire, so to speak, and we’re all far more concerned about trying to stay safe and healthy – and understandably so.

We’ve got more coming today here at Redleg Nation, so be sure to check back in. But for now, a few of the writers here decided to share some memories of past opening days.

Growing up in Cincinnati, my parents would take my siblings and I to the Opening Day parade multiple years, but I didn’t get to attend the game for the first time until 2007. That year I got selected for the ticket lottery, and we bought two tickets for me and my dad. It ended up being sunny with clear skies, the kind of weather you hope and pray for on Opening Day. I desperately wanted to go to this particular game because I had been learning about Josh Hamilton’s background since the Reds traded for him that offseason and I wanted to watch his MLB debut in person. I had read his book and loved his story of battling demons and redemption. He became one of my favorite players, even after the Reds traded him. (I know his latest trouble is indefensible, but at that time, his story was inspirational. It’s still inspirational).

The energy in the crowd as everyone gave Hamilton a prolonged standing ovation when he came to the plate as a pinch hitter late in the game was something I will never forget. If only Matt Murton, the Chicago Cubs LF, hadn’t robbed him of his first ML hit, it would’ve been even better. The moment with Hamilton was memorable, but my favorite part of that day was getting to experience with my dad all the joys that Opening Day in Cincinnati brings. From watching the parade to laughing at Mark Mallory’s awry ceremonial first pitch to cheering on the Reds as Adam Dunn and Aaron Harang led the Reds to a 5-1 victory, it was the perfect day for a 16-year old baseball-crazed fan and the father who helped introduce the sport to her.

I have two favorite Opening Days. The first is the only one I attended in 1984. The Reds beat the Mets 8-1 and Eddie Milner came close to smacking two home runs; he was robbed of one by a Daryl Strawberry catch in right field. On the day, Eddie went 3 for 4 and drove in three runs. Mario Soto got the win, as Mario Soto normally did. Soto was one of my favorite all-time Reds pitchers and he went the distance that day against New York. I talked to Eddie Milner about that Opening Day at Redsfest a couple years ago and he smiled when I brought that up. We talked for a half hour about that game, Gary Redus, Nick Esasky. “We didn’t have a lot of talent,” Eddie
said to me, “except for Mario Soto. We were confident every time Mario pitched.” Unfortunately, Eddie died of cancer about a year later.

My other special memory is 1980. Tom Seaver was scheduled to start Opening Day but he came down with the flu and Frank Pastore was his replacement. All Pastore did was throw a three-hit shutout, walking none and striking out five in a Reds 9-0 win against the Atlanta Braves. I listened to that game on WLW broadcast by Marty and Joe. It was a great performance by Frank Pastore on short notice.

Other teams have season openers but Opening Day is unique to Cincinnati. Call me hard-headed but it belongs to the Cincinnati Reds and whoever they are playing that day. Period. 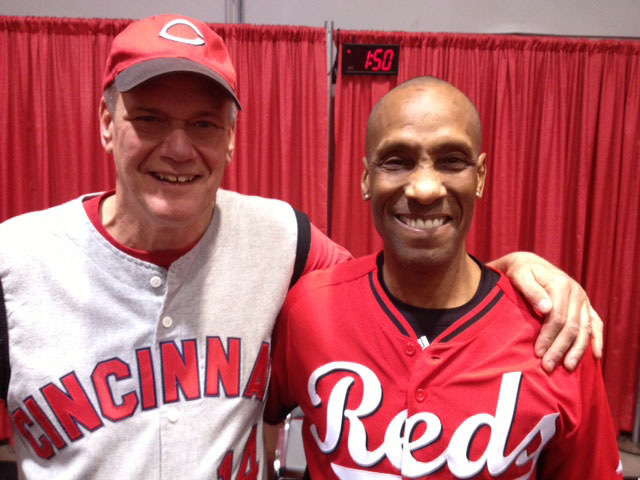 Over the years I’ve been to a few different opening days here in Cincinnati. All of them were memorable for their own reasons – and none of them had a single thing to do with what took place on the field that day. I don’t remember the exact year, but I want to say it was 2006 – but a friend and I bought an 8-game ticket package that included a ticket for opening day. We were broke kids at the time (we were adults, technically – but definitely broke). Our seats were in the bleachers, the second to top row, and unfortunately for us, right behind the foul pole. We couldn’t see a thing. Oh, and it was about cold° (yes, cold degrees is a real number) and there was a constant 20 MPH wind. We lasted about two whole innings in those seats before throwing in the towel on them. We wandered to another part of the stadium and just stood behind a section to watch the game, being freezing and miserable.

My next opening day was a few years later. When I woke up on that day I didn’t have tickets and I had plans to order some pizza from LaRosa’s and watch the game at home like I usually do. But my phone rang and it was my dad, who just informed me that his boss couldn’t go to the game and offered him two tickets. An hour later we were on our way to the ballpark in the rain. The tickets? Well, they were incredible. We were right behind home plate, underneath the radio booth. The game began in a delay, and rather than sit in the rain we were in the concourse area just standing around talking when none other than Johnny Bench comes walking our way. Young me reached out to shake his hand at the last second and it was probably awkward for him, but I didn’t care. It was awesome for me.

Fast forward about 45 minutes and the game is getting ready to get started, so we head to the seats – to find out we’ve got better seats than Mr. Bench on this day. The greatest catcher that ever lived was one section over and a few rows higher than we were. I don’t remember anything at all from that game. I had to look up the box score to even know that the Reds lost that day, 4-2 to Arizona. What I remember about that day was the events that led up to the game. I remember the excitement of my dad calling to see if I wanted to go to the game, and our excitement to be there. I remember the time sitting in the seats and talking with him, eating a hot dog – just enjoying being there. The baseball was entirely secondary on that day.

Those are some of our stories. What about you?