Rawlings and Major League Baseball announced their 2019 Gold Glove Finalists on Thursday afternoon. The Cincinnati Reds didn’t have a player make the final three for any position. One on hand, that’s not terribly surprising. There are some solid defenders on the Reds. Tucker Barnhart even has a Gold Glove of his own, winning the award back in 2017 – ending a streak of eight straight by Yadier Molina. Jose Iglesias was a rather strong defender on the 2019 squad, too. But that’s about where the list ends.

While the defensive metrics available to the public aren’t exactly great, there are a lot of what we’ve got to go on. The idea that any single person who isn’t employed specifically to watch baseball games actually sees enough baseball played by enough teams and players to use the “eye test” to say who is and isn’t the best defender is a crazy one. Can you probably tell who is good and who is bad? Probably. Can you tell who is the best from who is the second or third, or even fourth best? No, you probably can’t. And maybe the stats can’t either. Heck, I’ll go as far as saying that the publicly available stats definitely can’t – at least not with regularity.

Still, there’s at least some information there worth noting. As a team the Cincinnati Reds had a -10.5 defensive value according to Fangraphs. That rated 13th in the National League. Only the Mets and Pirates (who were at an incredible -51!) rated worse. The Diamondbacks led the way at 41.2 and were followed up closely by the Cardinals at 39.8. In 2019 there was certainly a “haves” and “have nots” set of teams when it came to defensive values. 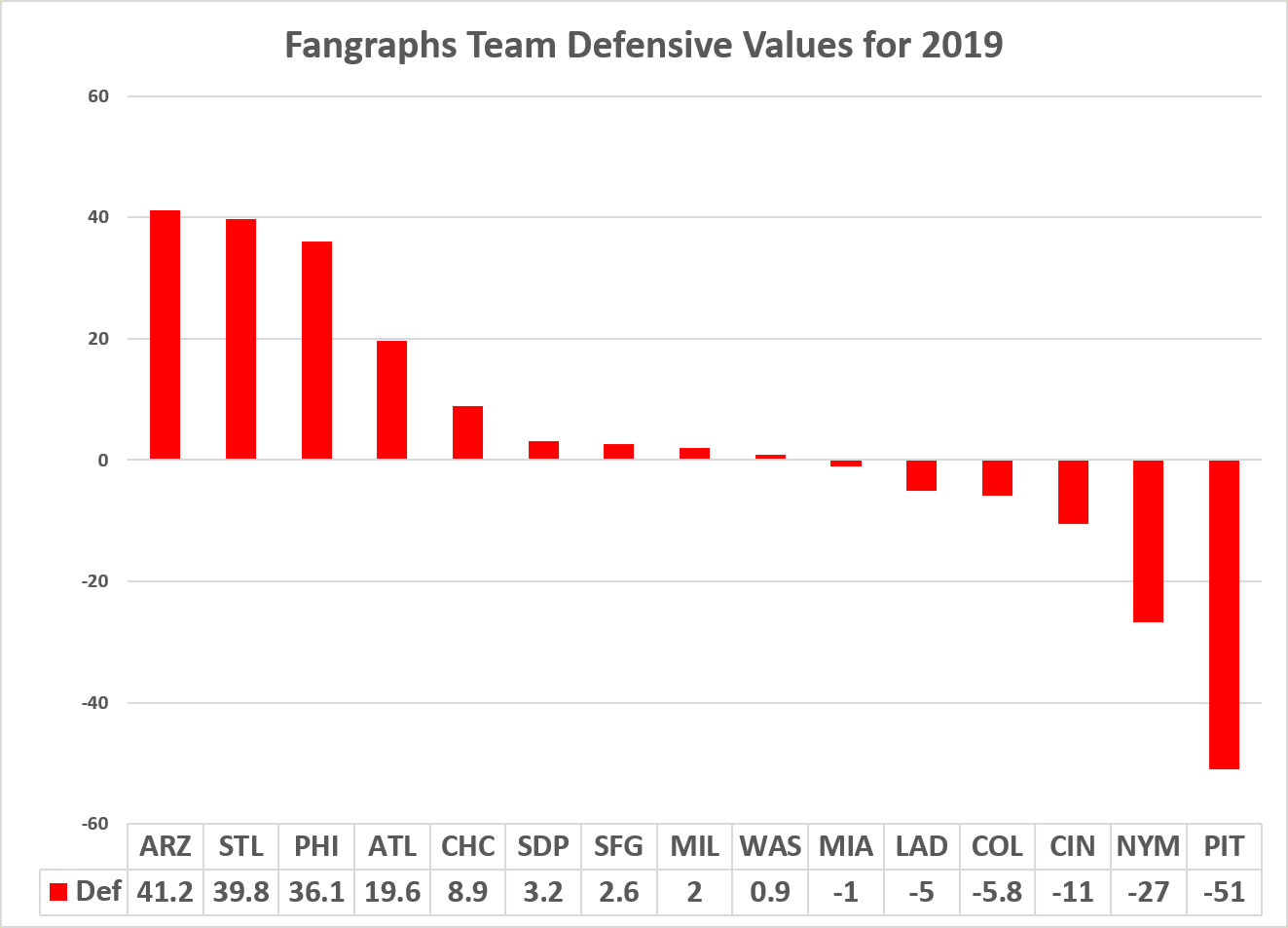 As noted above, the reds really only had two guys on their team that seemed to stand out as good defenders last year. Jose Iglesias and Tucker Barnhart. But how did they stack up to the Gold Glvoe finalists?

At shortstop the finalists were Paul DeJong of the St. Louis Cardinals, Trevor Story of the Colorado Rockies, and Nick Ahmed of the Arizona Diamondbacks. Using the Fangraphs defensive metric, DeJong was easily the top shortstop in the National League. Trevor Story was rated third, and Nick Ahmed rated out as the sixth best shortstop. Jose Iglesias rated out at number five. He was decisively ahead of Ahmed, but also significantly behind both Story and DeJong. Interestingly enough, Javier Baez was rated second here and not a finalist. Here’s the top six spots according to the Fangraphs metric:

If nothing else, Jose Iglesias deserved to be in the conversation. And perhaps he was and just didn’t make the final cut.

Catcher defense is a lot different than any other position. They have to call the game – and while the pitcher certainly has some say in it – the first call is always from the catcher based on the scouting reports (and in game adjustments he noticed – which is just a scouting report of a different kind). Then there is blocking pitches. And of course there’s also framing pitches, which fair or unfair, exists in the game and is valuable. They also, unfairly, get held to their caught stealing rates even though we understand that by-and-large, that’s on the pitcher rather than the catcher.

There’s not really a good defensive metric for all of the things that catchers do. Some sites attempt to give value to pitch framing. Personally, I believe that while there’s some merit to it, the data can only do so much. No one can frame pitches where the pitchers consistently miss the target. Having pitchers that have a little more control is going to help out. It’s tough to include that in the data, though.

This season the catchers who were named finalists are Austin Hedges of the San Diego Padres, Yadier Molina of the St. Louis Cardinals, and J.T. Realmuto of the Philadelphia Phillies. When it comes to Fangraphs defensive value two of those guys are nearly tied at the very top of the list. Realmuto is at the top at 27.8. Austin Hedges is second at 27.6. Worth noting that Realmuto played in 326.1 more innings and holds the absolute smallest of edges here. And then there’s Yadier Molina who is down in 9th place at 8.9. Tucker Barnhart is 11th, coming in at 8.7 (in 773 innings).

Of course, there’s a lot more stuff that goes into being a defensive catcher of value than is being measured in this stat. It feels pretty clear that Realmuto and Hedges deserve to be the finalists. It’s the inclusion of Molina where things get a bit questionable. He’s pretty far behind guys like Yasmani Grandal, Tyler Flowers, and Buster Posey here. For Barnhart, he’s right there with Molina. Both are in that middle tier of above-average catchers, but – at least according to this stat – not in the upper echelon for the 2019 season.