The dismissal of Billy Hatcher left me saddened and curious at the same time. So many times in the past, the Reds operated with what felt like a too too solid sense of sentimentality. Hiring legend Tony Perez to manage in 1993; holding on to Jay Bruce too long, hoping Affable Jay would finally fulfill the promise that seemed a given when he broke in to the majors in 2008 with a bang; the inability to part with Johnny Beisbol, when he clearly was intent on testing the free agent waters, but still had considerable trade value. The Reds have always seemed like an organization that valued relationships over the cold, hard baseball bottom line. On Sunday night, the Hatcher news, along with the sudden firing of Turner Ward, left me off-kilter. Animals became scarce here in New Jersey as if they knew something. The shakeup was a P-wave signaling a much larger S-wave that was about to rock baseball.

So, understandably, it moved baseball’s seismic needles when the Reds announced that Driveline Baseball founder Kyle Boddy, along with Derek Johnson, will be taking over development of the Reds’ minor league pitching system.

I had a lot of interest, and multiple offers. The direction the Reds are going blew me away. Throughout the two months of interviewing, the Reds’ opportunity just *felt right*.

I am so thankful for the opportunity. It is time to get to work. #BornToBaseball

“The direction the Reds are going blew me away.”

Now, there’s a loaded sentence, one worthy to pause upon. We, as fans, don’t often get a real look behind the veil of Reds’ operations and philosophy. In one tweet, Boddy had pulled back that veil and flung us down the rabbit hole.

As details emerge, it’s pretty clear this is about much more than Trevor Bauer. But we should start there. I’m pretty certain someone at the tippy-top of the Reds’ organizational chart has read Ben Lindbergh & Travis Sawchik’s The MVP Machine, a treatise on the lost art of baseball development, first employed by Branch Rickey, only to be forgotten, as baseball focused on finding prepackaged 5-tool talent, only to stand back and passively watch and wait for them to “grow.” Among the many fun and incisive anecdotes in the book is the fateful meeting of Bauer and Boddy at the Texas Baseball Ranch, where Warren Bauer took his son in search of the techniques that would exploit his work ethic and unlock his future as a baseball player.

The trade for Bauer left me confused as to what direction the Reds are heading. Had they simply given up on Taylor Trammell? Were they aiming flip Bauer, to parlay a few good August and September starts and restock the farm system following the departures of Josiah Gray, Jeter Downs and Shed Long? No matter what they think they can get out of Bauer in 2020, he’s only signed for one year. And it would be foolish to assume he’d be willing to stay. Iconoclastic and uninterested in long-term contracts, the young man from Santa Clarita, California seems on the face to be risky bet for the Reds.

Drafted #3 by Jerry Dipoto when he was Vice President of Scouting and Player Development with the Diamondbacks, things got off to a rocky beginning. As detailed in Lindbergh and Sawchik’s book, a miscommunication with veteran Miguel Montero over how his battery-mate should catch him illustrates just one of the episodes that soured his relationship with his teammates. Following the exit of Dipoto—his biggest believer, his metaphorical rabbi—who left to become the GM of the Angels, who was in Bauers’ corner? Certainly not an old school guy like Kevin Towers.

An interesting thing about the Reds hiring of Boddy is that the Cleveland Indians were looking to do something similar when they traded for Bauer. Looking to bring a fresh approach to their player development, the Indians thought Bauer would be the just the guy to carry the analytical flag, to bring a new outlook to training and cutting-edge ideas to the development of players throughout the Indians’ system. Whereas the Diamondbacks wanted no part of young Bauer’s alternative thinking, the kind that subverts traditional baseball culture, the Indians were eager to give it a shot. If Bauer was an outsider in the Arizona desert, he could be a pied piper on the banks of Lake Erie.

Now, the Reds will not only try to do the same thing with Boddy, they’ll look to take it several steps further. Boddy—and Derek Johnson—will have full control over the science experiment they hope will transform the Reds’ minor leagues.

Perhaps we should have seen this coming. I recall being shocked at the graphic below this spring. How many fans knew the Reds were already among the leaders in baseball ops analysts? 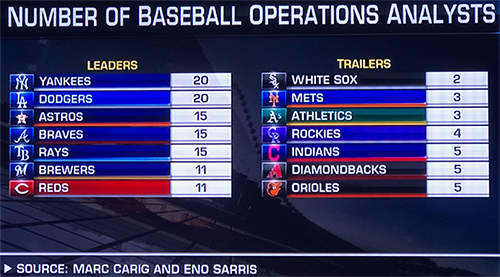 Dick Williams has been steadily, if quietly, moving in this direction since he took the reins. With this latest stunning hire, it should finally put to bed the notion that Walt Jocketty is behind the curtain playing Edgar Bergen to Williams’ Charlie McCarthy. This is Williams’ baby and in quiet moments around his house he might be paraphrasing iconic WLW radio jock Gary Burbank: “We don’t, we don’t, we don’t mess around.”

To be sure, it seems as if what happened in the minors shook the Reds as much or more than the failing offense and the one-run losses. While all eyes were on Trammell and his lack of development in double-A, I have to believe it was the stalled development of players like Robert Stephenson, Sal Romano, Tony Santillan, and others that may have accelerated the analytical push to light speed. Add to that the fact that Hunter Greene is about to emerge from his Tommy John cocoon and needs careful handling, and I believe the urgency was finally there to make sure the lower levels began producing results, instead of relying on trades and bargain free agent signings to build a durable pitching staff, one that can compete in the post-season. It will be a challenge.

While it has been common knowledge that the Reds have had little success developing pitching, the fact remains that few organizations do—at least reliably. By the middle of 2108, the Chicago Cubs had gotten a grand total of 30 homegrown pitching innings in the Theo Epstein Era. The Yankees max out their credit card for hurlers, the affirmative answer to “What’s in your wallet?”

Williams is intent on taking the Reds’ minor leagues, which has for too long been an un-weeded garden, and transforming it into a developmental hothouse, a place where Hunter Greene, Tony Santillan and Nick Lodolo, among others, can flower. Instead of restocking the minors, growing the minors may be the answer.