Starting pitching is a crucial ingredient in a successful team, and the best clubs have multiple arms they can rely on deep into the postseason.

The Astros have unquestionably the best duo in baseball in Gerrit Cole and Justin Verlander. The Nationals (Max Scherzer, Patrick Corbin, Stephen Strasburg), Mets (Jacob deGrom, Noah Syndergaard, Zack Wheeler), and Dodgers (Walker Buehler, Hyun-Jin Ryu, Clayton Kershaw) have formidable trios. Three of those four teams have clinched playoff spots, and the other — the Mets — is technically still in the race.

Beyond that, not many teams can say they have multiple All-Star caliber starting pitchers. The Reds, however, are one of them.

Earlier this summer, Sonny Gray and Luis Castillo became the first Reds starting pitching duo to make the All-Star Game since 2014. Both are strong candidates to get Cy Young votes. Neither will win, but being in contention is a big deal on its own — no Red has earned a vote since Johnny Cueto finished second in 2014. Gray also has a strong chance at winning Comeback Player of the Year.

While this success hasn’t equated to a playoff berth, it has resulted in them becoming one of the best duos in Reds history. Their stat lines are similar in many ways (as of Sept. 23):

Their stories also have some overlap. Both had disappointing 2018 seasons. Castillo had his first taste of adversity after skipping Triple-A and blowing MLB hitters away in his rookie season. Gray was a key trade deadline piece for the Yankees in 2017 and ended 2018 getting booed off the mound and left off the postseason roster. The organization couldn’t get him out of the Bronx quickly enough. There was hope for them in 2019 — both are supremely talented — but not many fans or baseball analysts foresaw Castillo and Gray becoming one of the top 1-2 punches in the game.

There’s little doubt that Derek Johnson has played a huge hand in the bounce-back seasons. Johnson’s philosophy centers around encouraging pitchers to throw their best pitches often. Accordingly, both Gray and Castillo have revamped their pitch repertoires. For Castillo, it — of course — means throwing his deadly changeup more often. 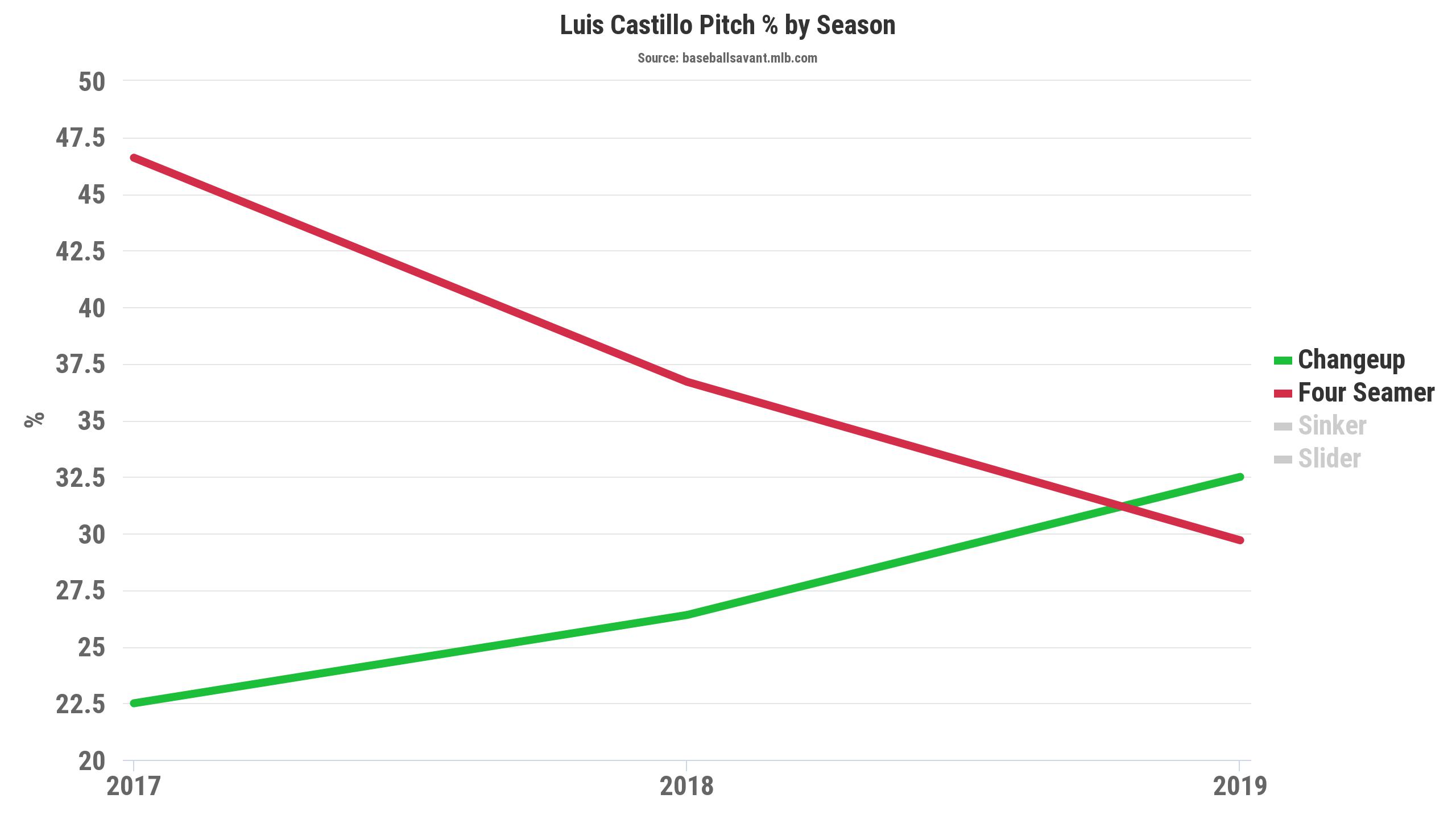 Like Castillo, Gray has followed the league-wide trend of throwing fewer fastballs, with the drop in usage coming on his sinker and cutter (he’s actually thrown more four-seamers than he did in 2018). Instead of a changeup, Gray has relied on his elite breaking pitches. Only Clayton Kershaw, Robbie Ray, and Shane Bieber have thrown a higher percentage of breaking balls among starting pitchers this season. 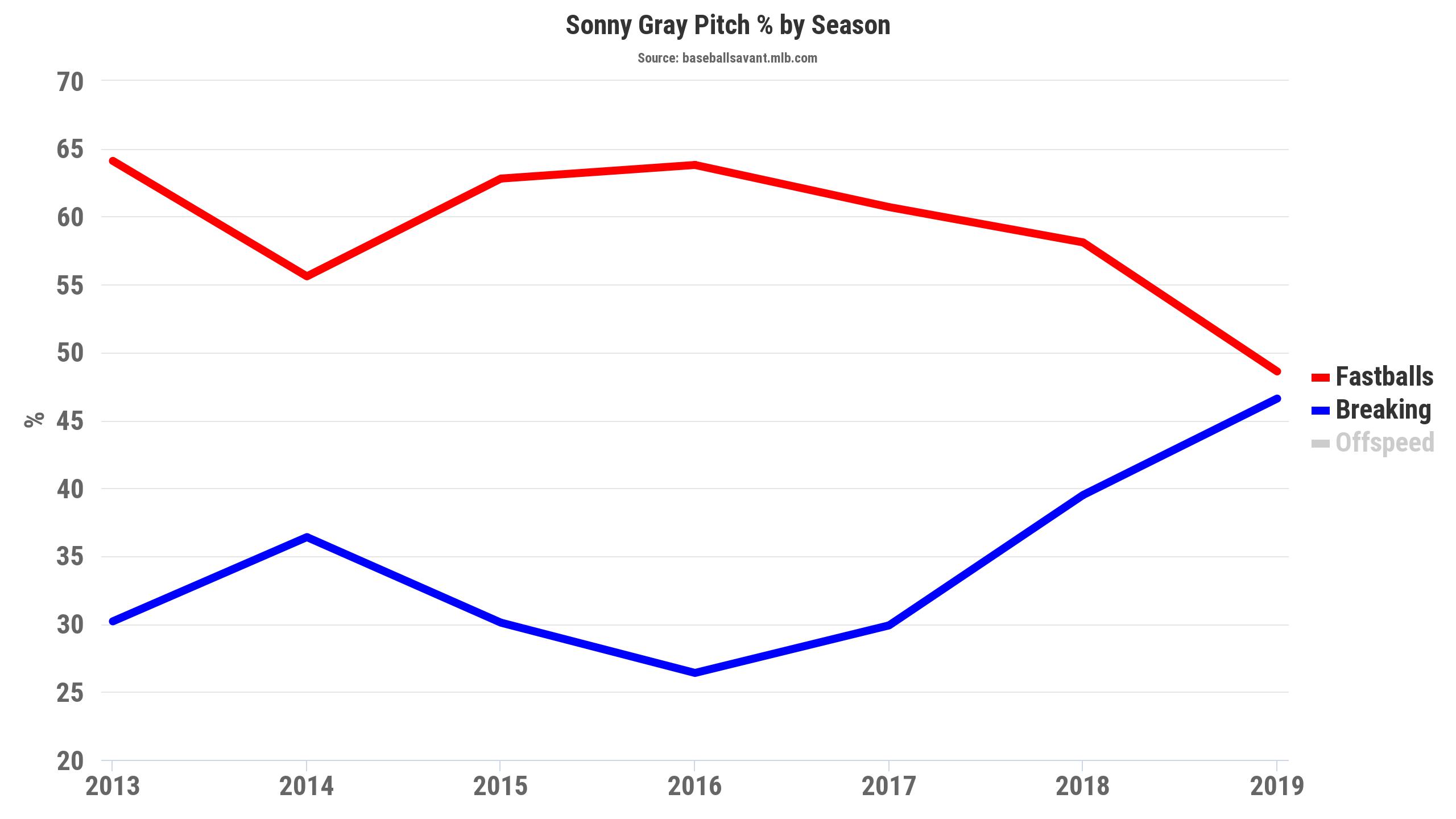 Gray and Castillo have played integral roles on a pitching staff that eclipsed 1,500 strikeouts, a team record, on Tuesday. They’re the fourth team in National League history to top that mark. It’s a product of a changing game, to be sure, but it’s a good thing to be on the top end of that trend.

Gray also struck out his 200th hitter of the season against the Brewers, joining Castillo in that club. It marks the first time in Reds history that two starting pitchers have reached that milestone in the same year. They’re also the only two starting pitchers in team history to finish with a 28% strikeout rate (min. 162 innings pitched). Only three other pitchers who’ve made at least 30 starts even topped 25%: Jim Maloney (1963), Mario Soto (1982), and Cueto (2014).

If Castillo finishes with a sub-3.30 ERA (his last start is Thursday), the Reds will have their first pair of pitchers below that mark since 1992 (Jose Rijo and Greg Swindell). They’re also on pace to finish with a 3.75 FIP or better; the last time two Reds pitchers did that in the same season was 2013 (Mat Latos and Homer Bailey).

You get the picture. Plenty of stats show Castillo and Gray have formed one of the best single-season duos in Reds history.

One last way to show that is through WAR, which takes the current run environment into context and compares pitchers to the league average. Gray and Castillo have each topped 5.0 bWAR, becoming only the seventh Cincinnati duo in the live ball era (since 1920) to lay a stake to that claim.

The Reds won’t be joining the teams mentioned at the beginning of this column in the postseason. But they have building blocks, at least on this aspect of the team, that could help them compete in the coming years. If Trevor Bauer can rebound in 2020, you can add the Reds to the list of teams with a trio of top-tier pitchers — and hey, maybe you can pencil them into the playoffs, too.