Living in New York, there are few things I like more than seeing the Reds beat the Mets and Yankees. With the Fox Sports Ohio feed blacked-out here, I’m relegated to the TV broadcast team of Gary Cohen and Keith Hernandez, who—I must admit—can be wonderful when they get past their outer-borough bias. Knowledgeable and full of interesting banter, a baseball fan can do a lot worse.

Hernandez though—old school to a fault—hates Cincinnati Chili and thinks Joey Votto “thinks too much” at the plate—and almost never fails to mention both.

The SNY Network crew featured Castillo and his use of the changeup; how the ball coming out of his hand looks identical to the fastball while being 10, 12, even 13 mph slower. Mets’ outfielder Michael Conforto commented that even with guys sporting outstanding changeups, occasionally they will slow the arm action down a little bit and you’ll sense something off the fingertips—but not with Castillo. 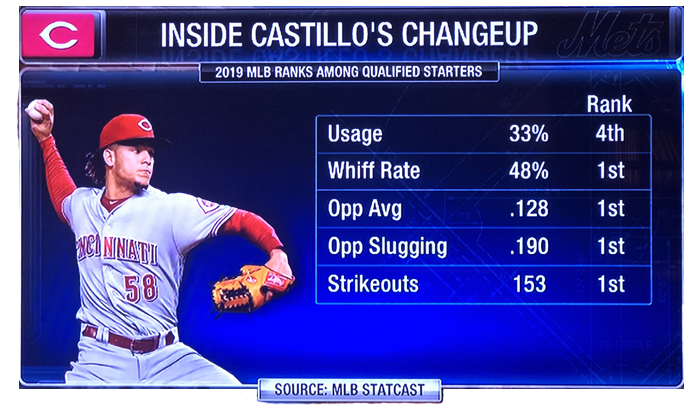 Part of the fun of this game was the pitching duel and the obvious respect each ace had for the other.

Luis Miguel Castillo…we have a code of ethics here!!

deGrom would return the favor in the bottom of the 5th, retiring Castillo on 3 pitches.

Aristides Aquino slipped the surly bonds of earth for the 17th time this year in his 174th at bat to wreck the Mets’ shutout.

… two pitches. The second was a slider that Amed Rosario took out of the ballpark to give the Mets and almost insurmountable lead, given what deGrom was doing to Reds hitters.

Keury Mella retired the first 2 batters before forgetting how to get people out.  The next 6 batters reached. Three more runs scored.

You want me to say the offense. I’m tempted to, but you have to give it to Jacob deGrom tonight. His ERA is now 2.51. He has the second lowest career ERA among active pitchers. Only a guy named Kershaw has been better. Maybe the Yankees lineup gets something off him tonight. Nobody else, though.

I’m not sure the ball delivered by Sal Romano that Pete Alonso deposited out of the field of play was even in the strike zone. Yet, he still was able reach out and poke it deep into the Cincinnati night, off the power stacks, threatening to bring the Toyota truck down to field level. As much as some like this homer-happy season, it’s become too much for me. There’s been over a 20% increase in home runs in major league baseball. In Triple A, where the major league ball is being used for the first time, home runs have increased by 50%, which is simply ridiculous. Ken Rosenthal has labeled it “Bludgeon Ball.”

I agree. Baseball is losing much of the nuance that made it so great. It’s time to reel this back in. I hope the Commissioner and Rawlings get their act together.

The Mets are 3 games back of the last wildcard spot. They remain a desperate team. The Reds have 2 more chances to ruin their season.