When Josh The Pilot is home, I try to cook our meals rather than throwing the canned food at him he eats on the road (meaning… I actually cook), and we try to make A Thing out of dinner (meaning… we actually eat at the table like human beings.) I turn on the Pinterest wine bottle lights in the kitchen (I had a lot of raw material to work with) and light a candle and we discuss such serious relationship issues as whether we should switch paper towel brands, or what.

We just canceled our cable, so for the past two nights, I propped a little transistor radio up on the table and we listened to the ballgame. And it was fantastic. We’d have done that all season, but trying to catch Marty in his final season has been highly frustrating, as 700 WLW has gone to the Wheel of Broadcasters model. Sometimes Marty was there for a couple innings, and then he vanished, then a Not Marty showed up, at which point Marty, I guess, wandered around the concourse until the end of the game, when he took up the mic again, at which point the game was usually sucking beyond all repair and I was off watching this Lifetime show I found recently which is about people who never met, and they get married, and then they spend time together and get to know one another and speak to marriage counselors until, six weeks later, they have built a deep and abiding hatred.

But this month, Marty has been steadily at it all nine innings. It is still summer and it is glorious and oh, how he will be missed. I hear your just criticisms of him and it’s admirable of Marty to step aside while he’s still cogent, but our affection for Marty, despite his occasional fine wordplay, isn’t just about Marty. It’s that I have memories of listening to him with my extended family on my grandparents’ back porch. It’s a familiar voice in a night that would only lighten into another dreaded school day. It’s the fact the same voice has reached the ears of four generations of my family. You have this, too.

It’s the porch and the pillow.  That’s why we’re dreading the end.

Aw man, I just want to stop cringing when I hear Mahle’s starting. I know his WHIP isn’t all that bad. But still. He’s simply not the rocksteady boomsteady yet.

(If you don’t know what “rocksteady boomsteady” is from, some of you never participated in clap songs on the St. Jude playground circa 1983-1991 and it shows.)

Somebody from the Duck Dynasty family needs to come get Jon Lester before he escapes from their swamp castle again. 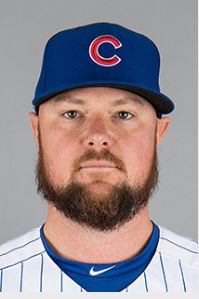 Lorenzen is starting in CF again, and Sonny Gray was RBI’ed last night, so y’all can take your DH and kiss my National League grits. Our pitchers rake.

-More trivia question not-caring with Marty and Cowboy:
MARTY:  “You remember what the question is?”
COWBOY:  “It has something to do with… baseball.”

-Suarez did not homer last night, but Alonso did… in Colorado. Give than man an asterisk. Yelich and Trout are done for the season. Alonso also homered this afternoon and is now sitting at 49 homers, but our man can still eke it out.

-With yesterday’s victory, the Reds have won the season series against the Cubs.

-Sonny Gray broke a (vaguely incomprehensible, but whatever) record previously held by Nolan Ryan. His reaction is just darling:

Being mentioned in the same breath as Nolan Ryan has Sonny Gray all kinds of flustered! pic.twitter.com/7GyICWu5SK

-This is my final Game Thread for the 2019 season. As is always the case, this is some of the most enjoyable writing I sit down for all year. Fret not: I’m still slated for Baseball is Life every two weeks, and when the season ends I’ll appear on a kinda-daily basis at blondechampagne.com. Hope to see you there.

Thank you for reading and your incredibly kind comments. I read and appreciated them all, except for the mean and idiotic ones. You know who you are.

Otherwise, I’ll see you next year. May the next Game Threads be winninger.