Last night sucked and it sucked in all ways at all times because even though the Cubs pitcher sucked the Reds sucked even worse at getting runners across and I don’t want to talk about it anymore. Except maybe for this one time when Marty read the third inning trivia question and Cowboy shouted out the answer before he even read the choices and Marty got exasperated and said “I don’t even care anymore” and told everyone that Cowboy was right. That was pretty funny.

This is what we’re reduced to now.

Sonny Gray is pitching tonight so here’s everything you need to know: 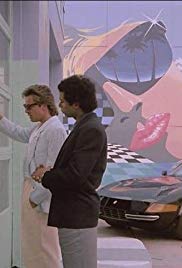 The most recent episode of Miami Vice I watched was called “Florence Italy,” which I thought was going to find an excuse to send Crockett and Tubbs to Florence Italy, but apparently that wasn’t in the budget for NBC, not even for Miami Vice in 1986. I guess they blew it all on music rights and hairspray. All they had the money for was to cast a prostitute named “Florence Italy” and shove in about 27 minutes of stock footage of the Grand Prix of Miami, which I just right now discovered existed, much to my Top Gear/Grand Tour fan shame.

Also in this episode Crockett and Tubbs pose as their drug-dealing aliases, Burnett and Cooper, and make their way into a race car driver party as “potential sponsors,” which at first made me laugh very hard. They’re drug dealers and they want to get their name out to the general public? How’s that gonna work? They’re gonna have their headshots on the hood with a photo of a giant pile of snow?

But then I remembered this was Miami in the 80’s and instead of sending smoke and confetti into the air at the end of the race, the event planners probably shot off cannons of crack directly into the crowd. So I’m buying it.

I like my job so I’ve got nothing to say about Yu Darvish’s name. Nothing. At. All.

The Reds bullpen had to step in after the third inning, the best part of which was the aforementioned trivia question shenanigans, so that should tell you about what kind of shape the relief corps is in this evening.

In the 9th inning, the Reds did what they had done the entire game and loaded the bases without actually scoring, and made the Cubs add in another relief pitcher at the bottom of the night, which made me spitefully happy. So if you want occasion to sin by rejoicing in the misfortune of your enemies, the Reds will ironically help you out every now and then. Pass it on.

-Joey Votto is back in the lineup tonight after battling sickness… OF BEING TOO AWESOME AMIRITE??!?!

-Derek Dietrich took Trevor Bauer shopping and then decided that he needed to “accessorize.” Do not let Derek Dietrich accessorize you unless you want to look like you just fell right out of the audience of Hangin’ Tough Live, because he thinks it should involve fanny packs and Jordan Knight’s hat. 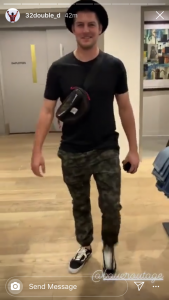 -Josh VanMeter left the game with the eventual and troubling explanation of “family illness.” Later he posted this:

Our very best wishes to Josh’s loved ones.

-Redleg Nation’s Jason Lindon is, sadly, stepping away from the site. He says farewell and shares his thoughts about the offseason today.