The Reds acquired Kevin Gausman via a fairly nondescript waiver claim in early August. It presented a chance for the Reds to find a potential bullpen option for 2020. So far, the right-hander has impressed since converting to a relief role.

In 14 innings as a Reds reliever, Gausman’s stuff has undoubtedly ticked up. He has a 3.86 ERA, and the peripherals point to an even stronger showing. Behind an eye-popping 34.5% strikeout rate and minuscule 5.2% walk rate, Gausman holds a 3.07 FIP and 2.07 xFIP. He’s also generating more grounders — 47.1% versus 37.0% as a starter. He already has an immaculate inning under his belt, and he struck out the side with the bases loaded and nobody out in Saturday’s loss to the Diamondbacks.

Batters aren’t just swinging and missing at his pitches over one-third of the time; they’re looking silly doing so. Gausman owns a 43.6% chase rate, meaning batters are swinging at more than two out of every five pitches outside the strike zone.

Gausman switched to a two-pitch approach in 2019, ditching his slider altogether. He now relies on a fastball-splitter combination exclusively. 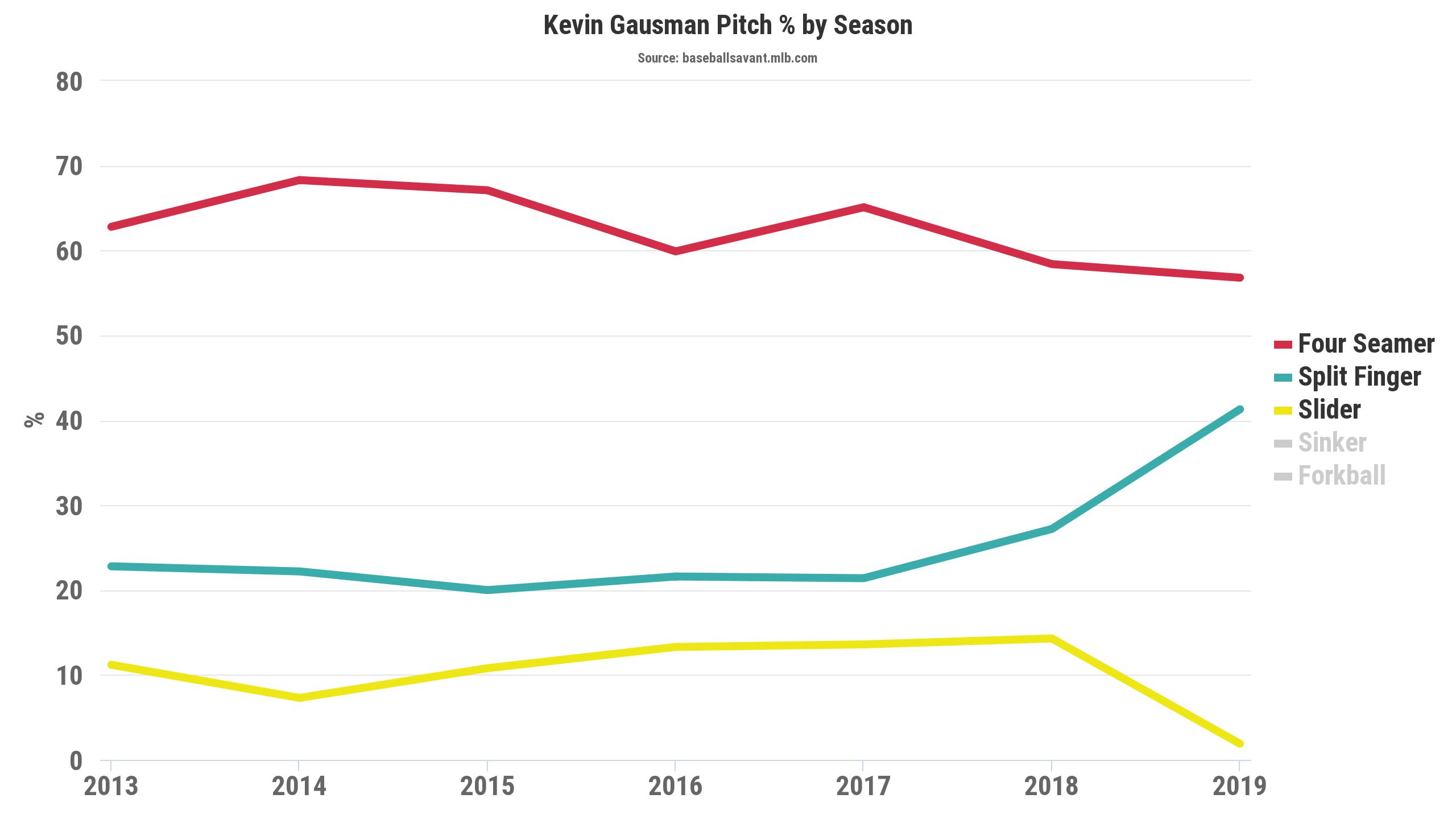 It didn’t work as a starter, which didn’t come as a huge surprise. Few starting pitchers succeed with two pitches in their arsenals, and any success is often fleeting (see: Tony Cingrani). However, it’s a more viable option out of the bullpen, as opposing hitters usually only see relievers once per game.

The fastball ticks up to 94 mph, but its mediocre spin leaves it susceptible to getting crushed. Gausman’s splitter is what stands out. was already among the best in baseball. Since 2014 — Gausman’s first full season — only three pitchers have a higher Pitch Value with their splitters. Only nine have a higher swinging-strike rate (21.8%), and 10 have a better xwOBA (.241).

Since he transitioned to the bullpen with the Reds, the splitter has been almost unhittable.

Those are insanely dominant numbers, albeit in a small sample.

Despite all the promising signs Gausman has shown in his short stay with the Reds, his acquisition has always come with a caveat: money.

The transaction was a salary dump for the Braves. Gausman already makes $9.35 million this season and is eligible for arbitration one final time in the offseason. The Reds will certainly be able to afford that contract next year.

The question is: Should they spend such a large chunk of it on a reliever? Gausman won’t get a huge raise after a disappointing 2019 season. But he’ll be the Reds’ highest-paid reliever even if his salary remains exactly the same, assuming they don’t go over that mark with a free agent signing. Only eight relievers (who were actually signed as relievers) make more than that right now: Kenley Jansen, Wade Davis, Aroldis Chapman, Mark Melancon, Zack Britton, Andrew Miller, David Robertson, and Craig Kimbrel. Gausman isn’t in that league unless he continues pitching as well as he has in a small sample for the Reds.

All that’s to say the Reds could probably find a similar bullpen arm for much cheaper. When factoring in general reliever volatility, spending nearly $10 million per year is often unwise. The Reds could shift him back to a starting role, but it seems unlikely that he’d beat out a group of Luis Castillo, Sonny Gray, Trevor Bauer, Anthony DeSclafani, and Tyler Mahle for the job.

2020 is shaping up to be a true all-in year. The Bauer trade signaled that. For the Reds to truly compete, their biggest investments have to be in acquiring offense. They’ll need to add to the bullpen as well, but Gausman’s salary may ultimately make him expendable.