Eugenio Suarez is good. As Reds fans, we know that. Fans from around the league, however, are not as well informed. You can’t blame Suarez for not trying to get recognition though. Since 2017 he ranks in the top ten among all third baseman in WAR and wRC+. Here is a graph showing exactly how much he has improved. 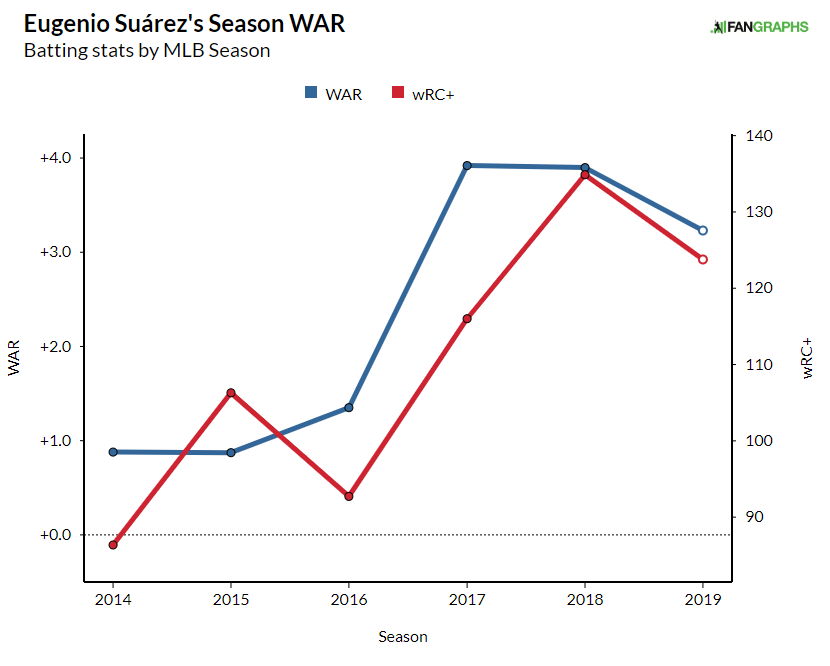 As good as he has been, top ten in just one position isn’t something to write home about. A closer look at how good that top ten is reveals exactly why not many people talk about Suarez. Third base is absolutely loaded.

In the past three seasons, Suarez has accumulated 11 fWAR while posting a 125 wRC+. Those are strong numbers, but look at some of the names ahead of him. Heck, look at the names behind him. Clearly, there are some studs that currently occupy the hot corner. So where would Suarez rank if he played another position? 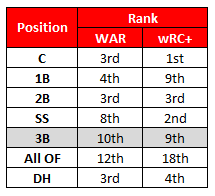 Catcher is a tough spot to compare to since the defensive requirements are so much different and it doesn’t take an elite bat to be near the top of the list. The rest of the rankings, however,  highlight that Suarez is probably being overshadowed by his position group. If he were playing anywhere else, there is a good chance people would talk about him more.

At first base, a spot reserved for strong hitters who are limited in the field, the offensive production is on par with third base but overall value with defense factored in is more limited. True hitters like Anthony Rizzo and Joey Votto outpace Suarez at the plate, but Cody Bellinger (mostly a RF now), Freddie Freeman and Paul Goldschmidt are the only players with more overall value. That’s not bad company.

2nd base has been dominated by one name recently; Jose Altuve. He has been an offensive machine that outweighs any slight negative value his defense may bring. On the other hand, Javier Baez’s defense drives his fWAR just slightly above Suarez despite his bat not quite being up to Suarez’s level. Baez may come in higher on this list. but I wouldn’t trade Suarez for Baez straight up. Just saying.

Shortstop is also loaded right now with a lot of balanced players who are strong with the bat and the glove. Francisco Lindor is a true superstar with Xander Bogaerts not too far behind. Andrelton Simmons, Manny Machado, Trevor Story and Marcus Semien also headline the position with above 11 WAR. Even with all those players, Carlos Corea is the only shortstop with a higher wRC+ (130) than Suarez. Defense obviously counts for something, but if the game is on the line at the plate, Suarez would be as good a choice as any of those players.

The outfield has some big-time names that highlight the kind of company Suarez has put himself in. Mike Trout, Mookie Betts and Christian Yelich comprise the top three to no surprise, a bit out of Eugenio’s league. The three spots ahead of Suarez though? Bryce Harper (2015 NL MVP), Giancarlo Stanton (2017 NL MVP) and Charlie Blackmon. Not too shabby. His 11 fWAR put him ahead of some very good players, including Lorenzo Cain, Whit Merrifield, Marcell Ozuna, Michael Brantley, Andrew Benintendi, Justin Upton, Starling Marte and Andrew McCutcheon (2013 MVP). That is getting the job done.

The point of all this is to show that while Suarez has been a top 30 player in baseball since 2017, it makes sense that he has been overlooked. That is because TEN players ahead of him play third base. With that much competition at one position, the player in the lesser media markets (Cincinnati is 35th nationally) or on the worse teams (no explanation needed here) will naturally get less attention. Even Anthony Rendon, who has been way better than Suarez and plays in Washington D.C. on a team that has World Series potential, gets overlooked. it’s tough out there for third basemen these days.

As Redleg Nation’s Ashley Davis wrote recently, while the Reds continue to swing and miss on their five -year-and-counting rebuild, take some time to appreciate the positives. Eugenio Suarez is absolutely one of those.