Let me start off by saying that when working with numbers, everyone cherry picks, myself included. I do it for my real job every day and I do it when looking up Reds stats to write about. My goal is to find data that tells a story. Without the stories, the data doesn’t mean a whole lot.

One of the cherry picks I saw on Twitter recently was in regard to the Reds performance vs the Marlins this year. With a 6-1 record and a +30 run differential, their record vs everyone else 60-74 with a -22 run differential. 66-75 isn’t very good, but it looks way better than the alternative. So are the Reds actually worse than we think because of their six wins vs Miami? 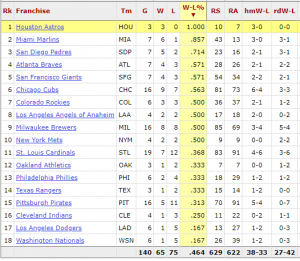 I am not here to definitively say no, but I don’t think it is a fair point to make. And while the season has certainly not been good, there have been bright spots that are more encouraging then six wins against Miami. For instance, the Reds are 16-10 this year against the Houston Astros, Atlanta Braves and Chicago Cubs. That is a 0.615 winning percentage (and +13 run differential) against teams with a combined 0.600 winning percentage on the season, including a 3-game sweep of the best team in baseball in Houston. Should these games be looked at differently as well?

Another example may bring up painful memories, so I apologize in advance. The 2012 Reds won the NL Central with 97 wins and needed an epic collapse to fall short of a visit to the NLCS. Of those 97 wins, 39 of them were against five teams with a combined 0.407 winning percentage. Two of those teams had over 100 losses (Cubs and Astros, lol). Factoring out those games, that squad was a pedestrian 58-51 with a +6 run differential. Did this fact make that team any less likely to win the World Series? Did it doom them to lose three straight games against the eventual World Champions? I’ll admit that it could be debated, but I am going to say no.

For the most part, a better team will win more games against a worse team over the course of a season series. While there are the occasional outliers (3-0 vs HOU, 5-11 vs PIT), it seems wrong to second guess the Reds for beating a team that is not as good as they are. It would be much more concerning if the Reds has a losing record against one of the worst teams in the league.

The bigger problem seems to be the fact that they are 12-29 against the Cardinals, Indians, Phillies, Dodgers and Nationals. If the Reds want to be a playoff contender, they need to play like they have against the Astros, Braves and Cubs all season long. And that includes beating up on teams that they should beat up on. The bottom line is that nobody asks the World Series Champion what their strength of schedule or strength of victory was. Another 6-1 record vs Miami in 2020 would be a good start for our Redlegs to get there.