Back in May, I tried to get to the bottom of why Raisel Iglesias was off to a rough start. The gist: his sinker was terrible, he lost some velocity, and he wasn’t locating his slider.

Since then, his sinker hasn’t improved, but his velocity returned to normal and he’s cleaned up his slider command. The numbers haven’t gotten better. His ERA stands at 4.55. The 11 losses stand out, even if they’re not the best way to evaluate a pitcher, especially a reliever. Thanks to a career-best strikeout rate (31.3%) and his lowest walk rate since 2016 (8.1%), Iglesias has stronger peripherals (4.18 FIP, 3.81 xFIP, 3.35 SIERA). While his SIERA is solid, the other numbers aren’t what most expected.

Of course, most relievers are volatile. But a reliever with Iglesias’ talent shouldn’t be merely average, right? And certainly not when he’s striking out nearly a third of the hitters he’s faced, right? So, what’s going on with the Reds’ $24-million arm?

Left-handed batters are slashing .267/.327/.556 against Iglesias this season. The last number — slugging percentage — really stands out, as he’s getting hit harder than ever. 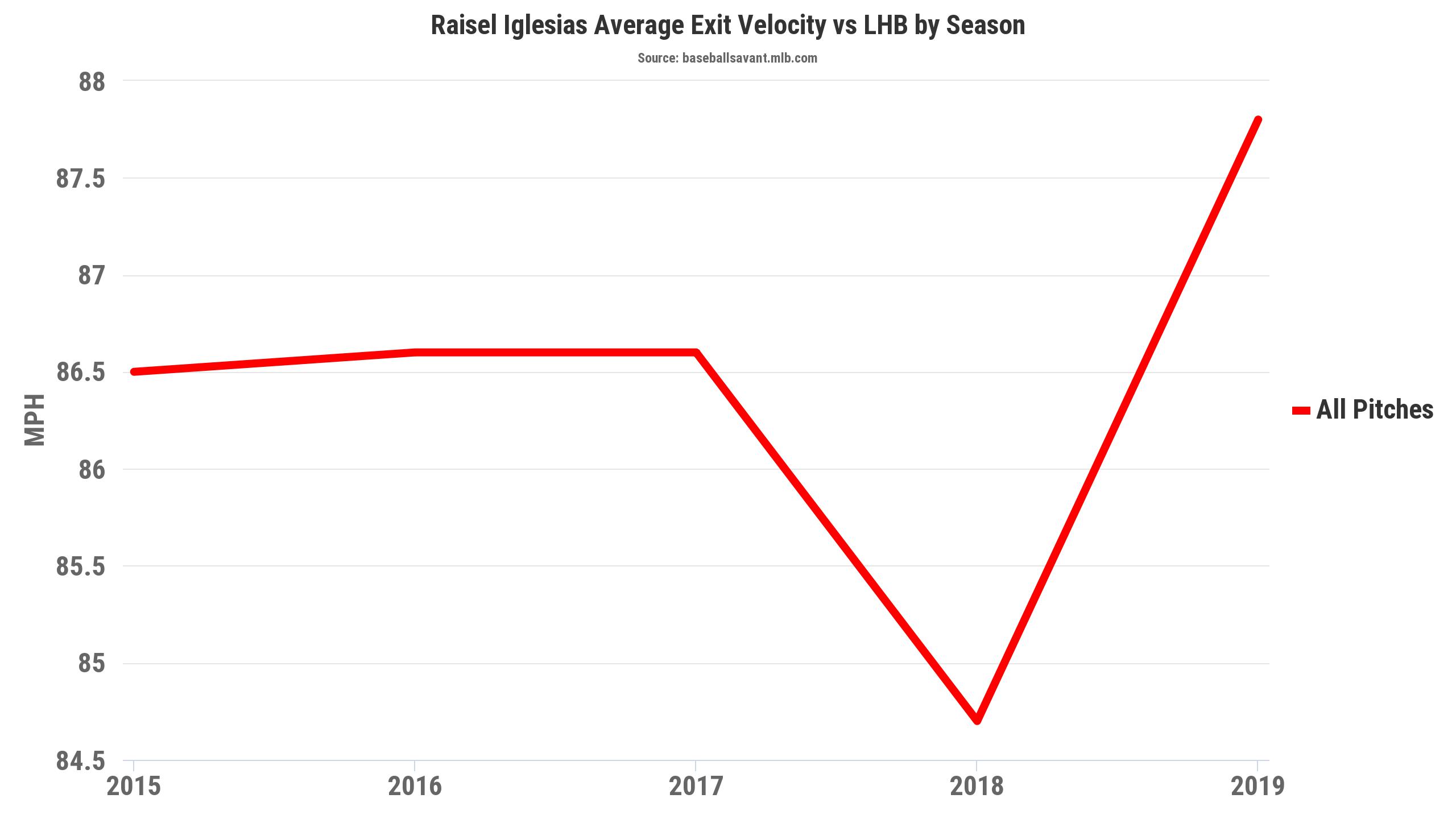 Iglesias still has a decent .312 xwOBA against left-handers because he’s increased the strikeouts. But he’s making too many mistakes in the middle of the zone. Seven of the 11 home runs he’s allowed this season have come against lefties. That’s nearly three per nine innings and good for a 30.4% home-run-to-fly-ball ratio.

He has swapped his sinker usage with his four-seam fastball, which has performed much better (.185 BA, .154 xBA, .284 xSLG, .250 xwOBA. The SLG and wOBA were intentionally left out; they’re at .556 and .350, respectively. Iglesias has allowed only five hits to lefties in 31 plate appearances ending in four-seamers, but three have gone for homers. Two were well-located pitches on the inside part of the plate — credit the hitters there — and the other was a cookie down the middle of the plate to Kyle Schwarber. Switching to the four-seam fastball is ultimately the right call, as he’ll get more whiffs and pop-ups by throwing it up in the zone.

The issues go beyond the fastball, though.

The changeup is Iglesias’ pitch of choice to get left-handers out. The pitch has late-breaking movement similar to Luis Castillo’s, darting down and/or away from hitters at the last second. Check out this strikeout against Shohei Ohtani or this one versus Freddie Freeman. Last year, Iglesias turned it into an elite offering. Lefties hit .140 (.176 xBA) and slugged .158 (.240 xSLG) with a .214 xwOBA. They whiffed 43.3% of the time they swung at it. The changeup kept Iglesias from getting completely crushed against lefties.

But it has regressed this year, somewhat negating the improvements he’s seen by switching to a four-seam fastball. Iglesias is throwing the changeup over 1 mph faster while his fastball velocity has remained steady, resulting in less separation in between the pitches. The whiff rate has gone down to 35.4%; hard contact has increased as the season progresses. 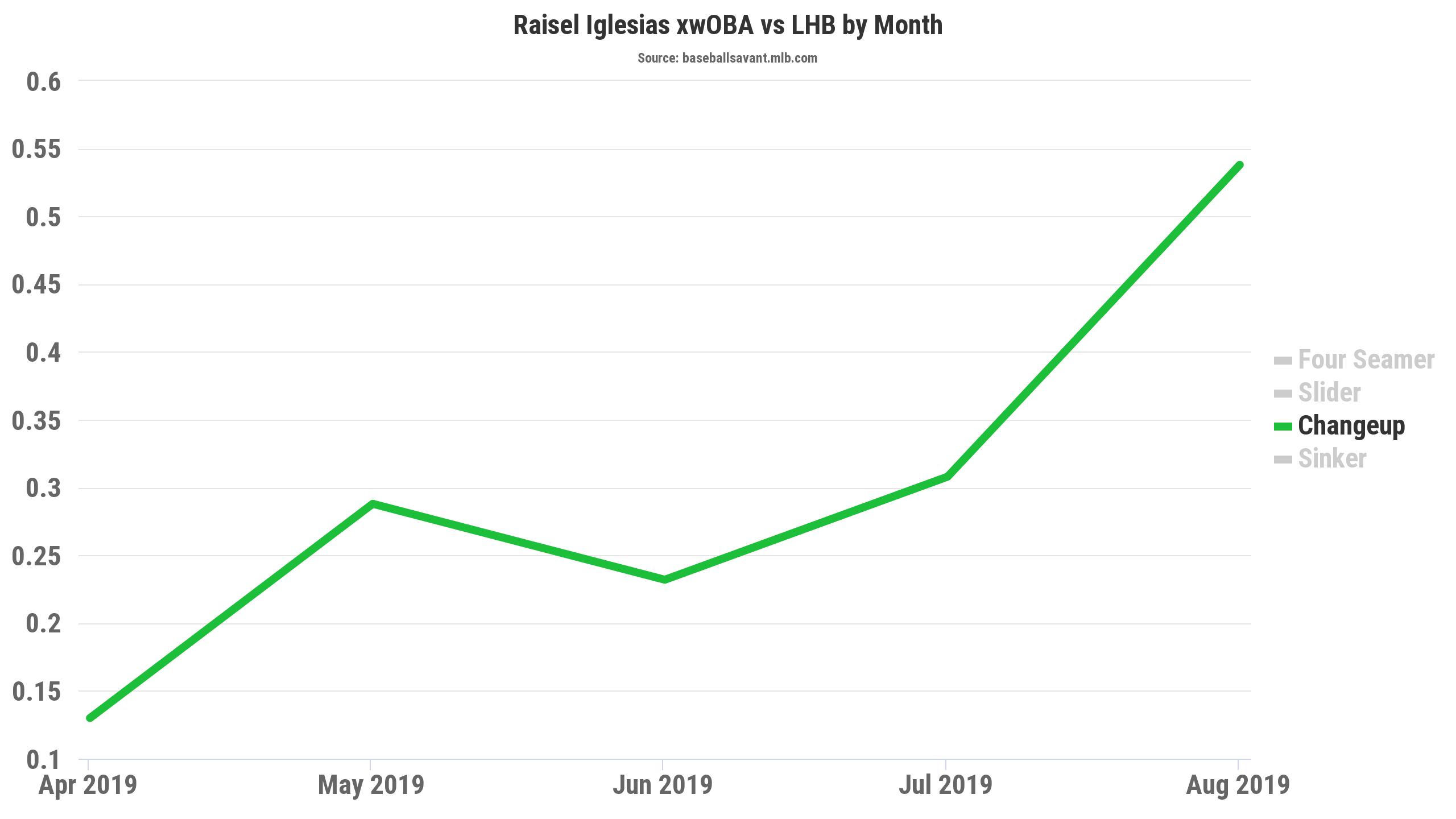 Iglesias has regressed against righties as well (.250/.320/.402). Much of that can be traced to a ridiculous .362 batting average on balls in play and his trouble commanding the slider early in the year. His career BABIP versus right-handed hitters is .260. His slider has a .228 xwOBA against righties, up from unhittable levels in 2018 (.172), but the pitch has performed much better since the middle of May. 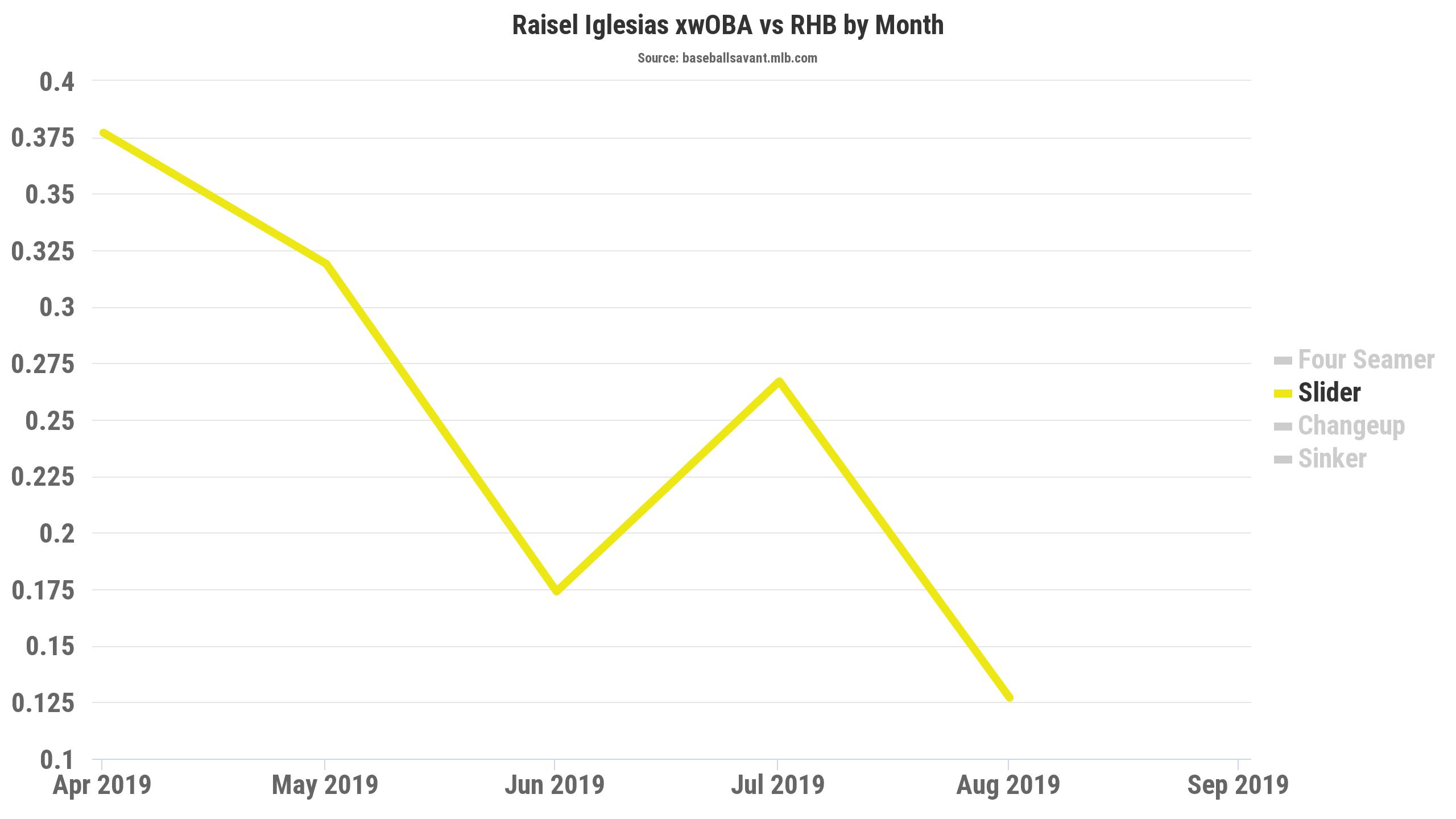 With the four-seam fastball, Iglesias has focused on throwing up in the zone just like many other Reds pitchers. It’s getting significantly more whiffs (31.0%) compared to last year (19.6%) along with softer contact. Still, though, the pitch isn’t anything special. In righty vs. righty matchups, the league averages a .355 xwOBA; Iglesias is at .348. When he’s not getting the fastball up, it’s very hittable.

The death of the sinker has really hurt him against right-handers. It used to be a go-to pitch for Iglesias, generating grounders more than half the time. He also got swings and misses with the pitch at an above-average clip, although it was far from a strikeout pitch.

The whiffs remained, but the ground balls disappeared (34.2%). Iglesias struggled to keep the pitch down, although he wasn’t shy about throwing his two-seamer in the middle of the zone before. Mostly, he fell victim to the uppercut swing trend across baseball. The sinker now falls on the same plane as many hitters’ bat paths. Batters aren’t topping the ball and hitting it into the ground. They’re barreling it and hitting it into the stands. What was a strength for Iglesias turned into a weakness. 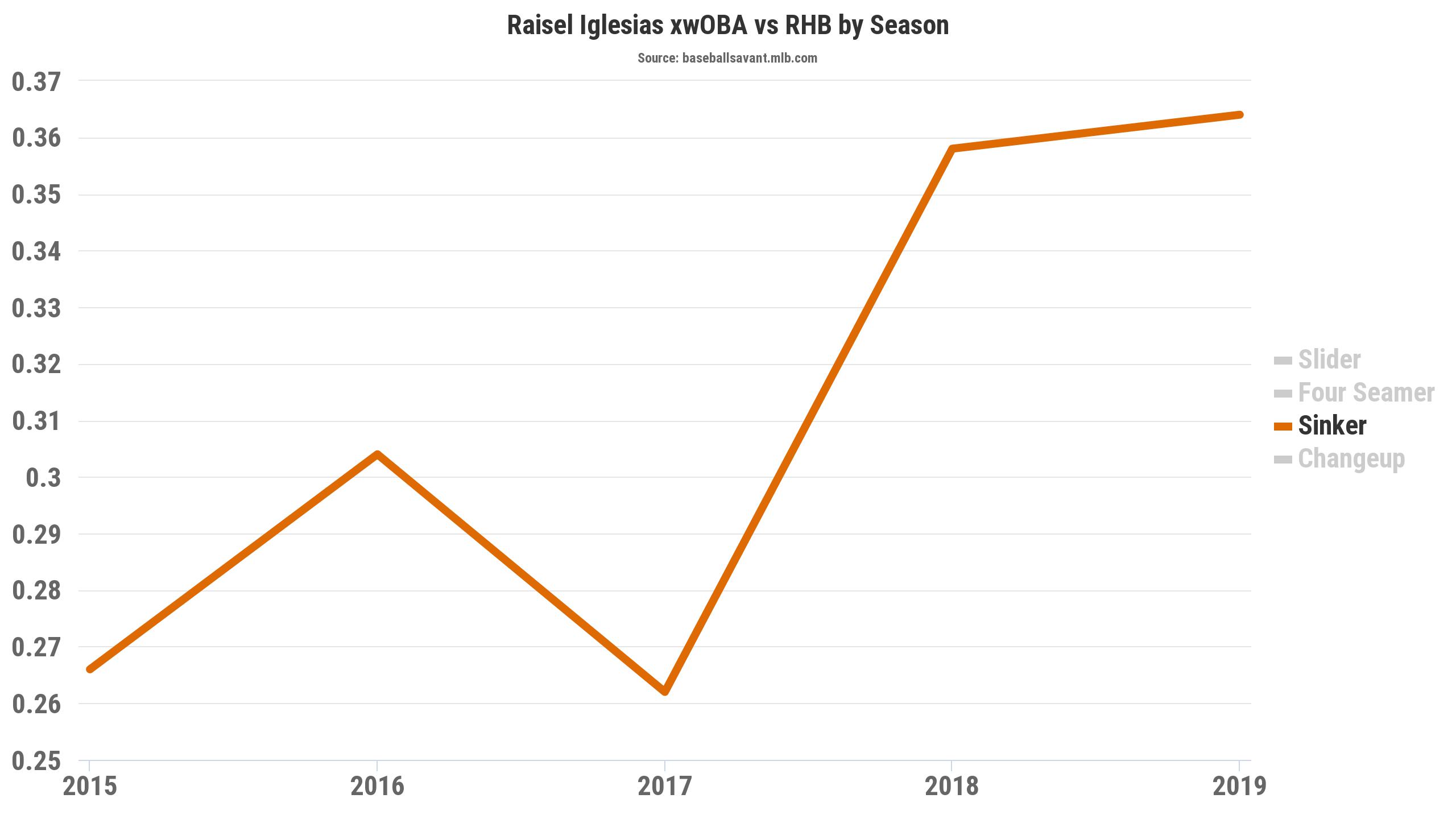 Assuming the sinker doesn’t regain its former dominance, focusing on the high fastball should remain a priority for Iglesias.

Some Bad Luck Mixed In

Aside from some bad BABIP luck against right-handers, misfortune has found Iglesias with the home run ball, too. His 18.0% HR/FB rate is well above league average (15.3%). Pitchers don’t have much control over what happens when the ball gets in the air, especially in this hitting environment with a juiced ball. Cheap home runs are coming left and right this season.

Among all pitchers to allow double-digit home runs — a group of 211 pitches — nobody has allowed a lower average distance on those balls than Iglesias (379 feet). He has given up an unusual amount of cheap dingers, even in this era of baseballs flying out of parks on ridiculous swings like this. Part of that is pitching in Great American Ball Park, too.

Still, it’s not an entirely unsurprising development considering he’s given up more fly balls and generated fewer grounders than ever before. 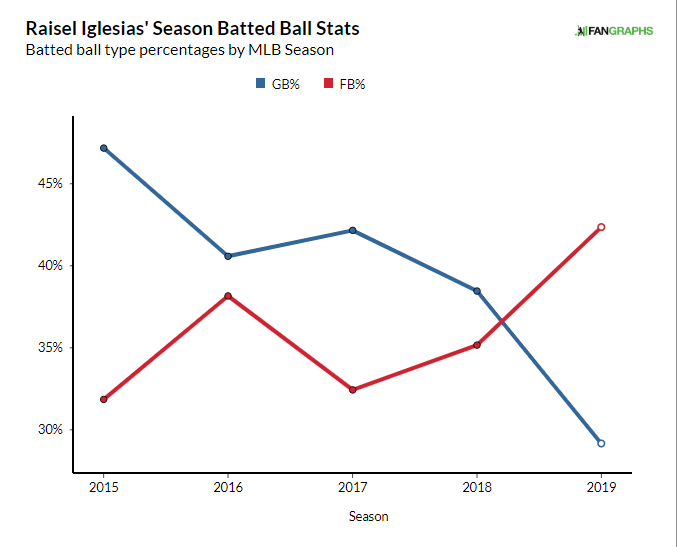 However, there is at least some room for his luck to improve.

Where Does That Leave Us?

Iglesias will be back next year, much to the chagrin of some reading this piece. Despite his struggles, he’s third on the team in fWAR (0.7), second in xFIP (min. 25 innings), and second in SIERA. He didn’t suddenly turn into a pumpkin like David Hernandez.

Iglesias is still well above average against right-handers, although he has regressed since his dominant 2016 and 2017 seasons. The slider is still a strong weapon for Iglesias against same-handed opponents. A dip in fastball effectiveness as a whole has kept him from being his former dominant self against them. The high four-seamer has shown promise, but he has to keep it up; it gets crushed when he leaves it in the middle of the plate. Against lefties, he’s better off ditching the sinker altogether and refining his four-seam and changeup combination.

If he’s going to be an extreme fly-ball pitcher moving forward, though, the home run problem will likely continue. Among all pitchers with 50 innings thrown this season, only seven have a lower ground-ball rate than Iglesias (29.2%). That includes starters, providing a 294-player sample. Unless he starts striking out hitters like Josh Hader — who has the lowest ground-ball rate in baseball but still maintains a 2.70 ERA, 3.20 FIP, and 2.42 xFIP — it’s going to inflate his numbers unless he gets lucky with his HR/FB ratio.

Then, there are his struggles in non-save situations. Ideally, David Bell would be able to use Iglesias in any important situation. He has wilted during those times, however, whether it’s an issue of being mentally unprepared or something else. He’s undeniably the most gifted arm in the bullpen, but this makes his future role murkier. At the least, there’s still plenty of talent for Derek Johnson to work with in the offseason. More than anything, Iglesias will have to continue adjust his approach with his fastballs to rediscover his former self.