After last week’s post, you all got me thinking. Many of you agreed that the Reds will never make the playoffs while continuing to start Jose Iglesias or Freddy Galvis. Others disagreed, citing Iglesias’ clutch-hitting as his offensive value. And a few of you changed the subject entirely, pointing out Joey Votto as a bigger offensive sinkhole than Iglesias.

Well, I’m happy to announce that all of you (and me) are right. Also, you (and I) are all wrong. Let me explain.

FanGraphs calculates a stat called “Clutch” that measures “how much worse or better a player performs in high leverage situations than he would have done in a context neutral environment.” In other words, does a player elevate his play at the plate when the game is on the line. As a stat, Clutch tends to follow the eye test rather closely. Fans know which situations are high leverage and which aren’t, so we remember more acutely those hits that a player has in big moments. When Jose Iglesias hits a home run in the ninth, it registers in our mind that Jose Iglesias knows how to hit a homer when it counts and thus ascribes a positive mental association to Iglesias’ offensive talents. The same but opposite principle works when Joey Votto strikes out in the ninth but homers in the fifth of a 7-0 blowout. Iglesias : Clutch :: Votto : Not. No advanced stats needed.

Except we have advanced stats, and as many of you rightly pointed out, Jose Iglesias leads the Reds with 150+ plate appearances in Clutch, and it’s not even close. Also of note, Freddy Galvis didn’t appear on this list because he doesn’t have 150 plate appearances with the Reds, but his -1.72 Clutch would rank dead last. 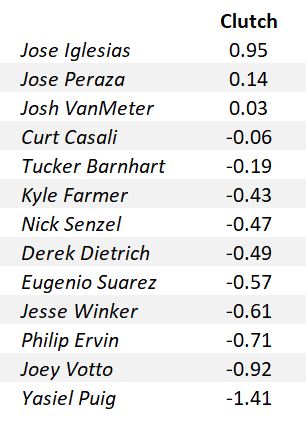 So yes, those of you who opined that Jose Iglesias is worth keeping around because of his clutch hitting are right. Also, those of you who pointed toward Votto’s lack of contributions being a bigger problem than Iglesias also score a point.  However, some caveats need to be made.

Second, Clutch measures elevation in performance, not just performance. A .300 hitter who hits .300 in high leverage situations will not earn a high clutch score because he’s simply performing at his average level. As such, worse hitters have more opportunity to be clutch because they have a lower baseline to clear. It doesn’t always work that way — Bryce Harper, a good hitter himself, leads the league in Clutch because he’s otherworldly with the game on the line. But that phenomenon partially explains why the above chart shows the heart of the Reds batting order as the least clutch members of the team.

Hopefully, you’ve noticed that WPA is context and situation dependent. WPA/LI neutralizes that, dividing a player’s WPA by his Leverage Index, which measures how large of a swing in WPA any event can cause. VanMeter’s at-bat in the tied game obviously carries more leverage than his at-bat at the end of the blowout.

With WPA/LI, we can measure how a player hits in a context neutral environment, or in other words, how much that player contributes to winning purely on their bat’s merits, not their “Clutch.” Here are the Reds ranks in WPA/LI, with 0.0 being average, 1.5 being above average, and 3.0 being great: 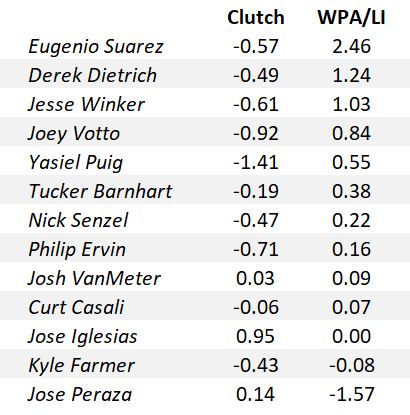 Intuitively, this chart makes more sense because the Reds’ best hitters are at the top. As we can see, even though Joey Votto hasn’t shown up in high leverage situations this season, he has in other situations. By WPA/LI, Votto is the fourth most impactful bat for the Reds in 2019. On the other end of the chart sits Jose Iglesias. His 0.00 WPA/LI defines average, despite his demonstrated clutch hitting. (Galvis ranks a bit better here, his -0.28 WPA/LI mark sliding above Jose Peraza’s just dreadful season.)

So no, Jose Iglesias will not fix the Reds’ middle infield problem. If anything, think of this “clutch” season of his like you thought of David Hernandez’s and Jared Hughes’ clutch seasons last year: Fun and magical but unlikely to be repeated. And no, I’m not super worried about Joey Votto just yet. He is declining and much of his power seems to be gone, but he’s still less of an offensive sinkhole than Iglesias (and Galvis) figures to be.

Everyone is right and everyone is wrong. I’m okay with that as long as the Reds find someone, anyone who can hit and play shortstop for 2019.