Good pitching and opportunistic hitting added up to an enjoyable businessman special. The Reds fell behind early but did not stay down long and hung on to a two run lead for the 4-2 win and series victory.

Luis Castillo was coming off the worst start of his career in his last time out against the Cardinals. As Chris Welsh pointed out at the beginning of the broadcast, all four of Castillo’s subpar games this season (4 or more ER) have been followed by strong outings in his next start. And while we did not get three straight Reds starters with 10+ strikeouts (it would have been the first time in Reds history), Castillo paired an above average groundball rate with another zero walk performance, adding up to six solid innings of work. He allowed five hits and one run while striking out four.

Speaking of the no walks allowed, Castillo has only allowed two walks in his last five starts, a very encouraging trend considering his walk rate has really been his only weak spot this year. His recent improvement has helped bring his xFIP back down a bit after a recent spike. He still has some room to improve even further, but he is certainly heading in the right direction. 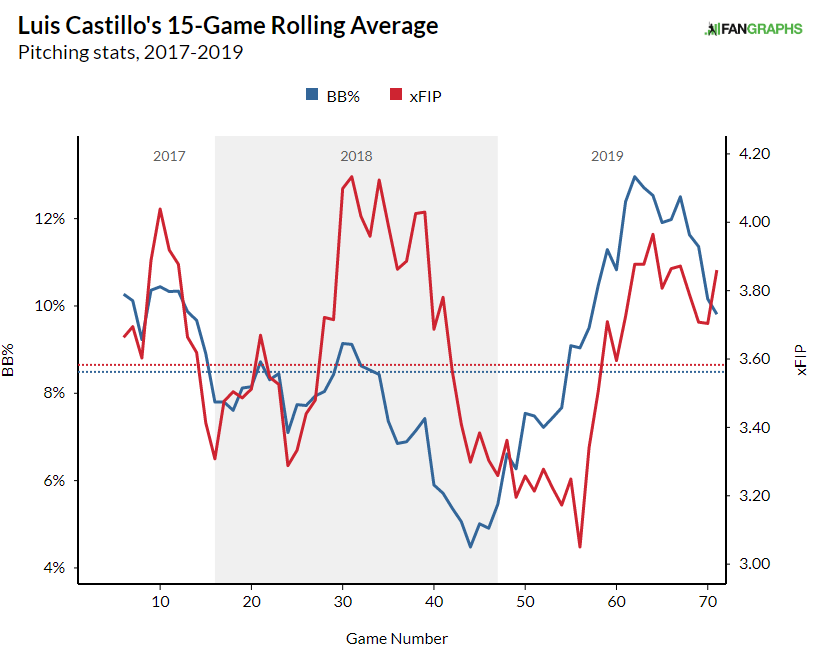 Lucas Sims got off to a rough start in the 7th, allowing a leadoff homerun to Francisco Meija to bring the score to 4-2. He retired the next three batters after that and remains a promising young arm that can hopefully provide some stability to the bullpen for a few years. Michael Lorenzen picked up a 1-2-3 inning in the 8th with two strikeouts. Raisel Iglesias came on in the 9th and struck out two more, never putting the game in question.

The Padres let the Reds right back into the game in the bottom of the 3rd inning with Eric Yardley relieving Matt Strahm and making his major league debut. Nick Senzel’s easy fly out was dropped by the left fielder, which set up a sacrifice bunt by Jose Iglesias and a game-tying, RBI single by Eugenio Suarez. After an Aquino walk and Phillip Ervin single loaded the bases, Yardley gave way to reliever Trey Wingenter.

Wingenter came into the game with very high strikeout (33%) and walk (12%) rates, and that is exactly what he did today. He walked in the Reds second run with Freddy Galvis collecting the RBI. After striking out Tucker Barnhart, Josh VanMeter took a four-pitch walk to make the score 3-1 Reds. Luis Castillo struck out to end the inning.

Jose Iglesias played add-on in the 4th inning with a solo shot to extend the Reds lead to 4-1. The Reds threatened in the 6th, 7th and 8th but came up empty. Fortunately, the bullpen was on today and a two-run lead was enough to seal the deal.

Freddy Galvis collected two more hits today and continues to play really good baseball. Based on his first 8 games with the Reds, he has produced WAR at the rate of 1 per 16 games, which would give him 10 WAR over the course of 162 games. His career high WAR was 2.3 in 2016 with the Phillies. Fun with small sample sizes.

Jesse Winker was apparently unavailable today but Jim Day reported that the Reds are hoping he is available by Friday and has therefore not been put on the IL. Jim also reported that Votto could come off the IL at some point during the upcoming series against the Pirates if there are no more set backs.

70 combined strikeouts in this series is the most ever in Cincinnati over the course of a 3-game series. That accounts for 45% of all outs that were made. Even I have to agree with tHom (who gawked at that number on air) and admit that is a lot of strikeouts.

The Reds get a day off tomorrow before heading to Pittsburgh to start a 10-game road trip that includes Miami and St. Louis.