I am pleased to announce that Sonny, having bounced back from his tryst with Crying Bikini Scammer, pitched rather well last night. Sonny has been the best quiet surprise of this season, particularly after a mediocre start. When he was named to the All Star Team my official professional sportswriter reaction was: “Eh… meh.” But since then Sonny Gray has been shockingly solid. Now he really is an All Star! He’s the first player I’ve not-met who’s had a backwards All Star season. It’s like he found out he was an All Star and went “Aw crap, now I gotta be an All Star” and then became one. He pre-manifested himself right onto that roster. Right now, his ERA is half of what it was a year ago. It’s a little terrifying. And awesome.

Well, let’s go at it against these San Diegoans. 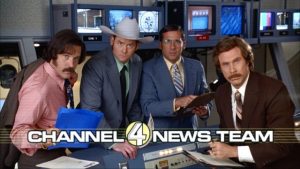 I have a sad face when I look at Luis Castillo’s ERA. It’s better than Matt Strahm’s ERA, but then I had to put parts of my hand up to the screen over Matt Stram’s abundance of hair to determine if he is cute or not, and it’s just impossible. He’s too hairy. Anyway, I expect more from Luis. More than I do from Tucker Barnhart playing left field.

-Perhaps the best part of the Surgence of Sonny Gray is that all fourteen people in attendance at the game last night got free pizza.

-NEW TV UPDATE: I am very proud of Josh The Pilot for choosing a TV before the end of the current Presidential administration and plugging it in and everything. Although I feel I should point out that when we needed a garage door opener it took him six months to purchase the garage door opener and then it sat for a few more months until it was installed, but that TV, man, it was up and running before sundown.

-Here is a very important announcement from our own Chad Dotson:

Down on the farm, pitcher Randy Wynne struck out 17 batters and allowed just 1 hit last night.

Cincinnati #Reds minor league pitcher Randy Wynne had the best performance I can recall in my 14 years of covering the farm system last night, striking out 17 batters without a walk in 8 shutout innings. https://t.co/B3riXRVkv5 pic.twitter.com/pqQRiraNN6