At a time when none of us need any more ugly, Josh The Pilot just came in the room and intoned, “The day has come.” He usually saves intoning for very bad things, so I braced up for some good panicking, and then he said: “The TV doesn’t work,” and then I panicked in full.

The despaired-over departed is at a minimum eight years old, and for at least the past two, whenever we pass a 4K for sale he studies it, sighs, thinks, shakes his head, thinks again, sighs some more, reads the installation instructions, pets it, and walks on. Not having an excuse to replace our student loan-people old TV with a student loan-people smart one has been his great unrequited love.

This means a trip to the store to decide on a new one at last, which will involve a very great deal of gazing, calculating, measuring, deciding, changing of mind, changing back, discussion of pixels, and consultation with the whole entire Internet. On our budget, a TV is a massive investment, so we really should take the time to ensure we’re finding one that lasts, as opposed to my usual gut and sparkles-based decision making (“This box has a picture of a giraffe on it!”) I depend on him to be the even-handed one. But this is a person who actually says to drive-thru employees, “Just a minute, I’m thinking” and then actually thinks as we and the cars behind us combust dead dinosaurs at great cost as I die inside a million times. So RIP the rest of my August.

TL;DR: Today’s game will be a Radio Game. Please message me immediately if Thom says anything relevant. 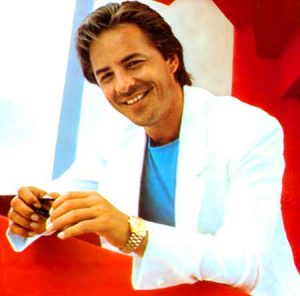 -The most recent episode of Miami Vice I watched was about a scammer attempting to make Sonny feel sorry for her and buy a bunch of 80s cocaine from her boyfriend. She does this by lying around in a bikini and crying a lot. But Sonny knows she’s trying to scam him, so he takes one for the Vice Squad and has lots of Adult Time with her until the police shoot her boyfriend (played by Ted Nugent, who reaches deep into his performance skills to portray a drug dealer by not wearing a shirt the entire episode, even with a sportscoat– it was an amazing 47 minutes of television, you guys) and show up to arrest Crying Bikini Scammer, who looks sadly at Sonny, turns to the cop escorting her away, and within five steps is attempting to initiate Adult Time in the police helicopter. And you can tell Sonny is sad. The episode guide I’m following pronounced Sonny as sad because he was in love with Crying Bikini Scammer, but I don’t think that’s so. I think Sonny was sad because he wants an actual relationship which involves emotional resonance, trust, and shared values instead of just Adult Time, and deep beneath his cynical exterior, he was hoping that Crying Bikini Scammer was legitimately interested in him instead of being a Crying Bikini Scammer. As a vice cop, he is exhausted from seeing the worst of human nature and is craving a glimmer of light in the people he protects.

-The Padres’ pitcher is named Cal and does not have anything to do with the Vice Squad.

-Derek Dietrich started with the Bats last night in a rehab assignment. Guess what happened to him while he was batting. Guess. Guess. Just guess. You will never guess.

-Amir Garrett returns from suspension due to his role in The Great Amir Vs. The Whole Entire Pirates Bench Beatdown. It was eight games long. In those eight games, we have sucked much.

-Josh The Pilot has entered the room once more to announce he has anointed his Television of Choice. I don’t believe him.